In 1996 The Personal Responsibility and Work Opportunity Reconciliation Act was passed, giving states control of welfare.

Building on policies that had been passed by Reagan, and a foundational principle of “personal responsibility,” TANF added work requirements for aid, shrinking the number of adults who could qualify for benefits. This legislation also created caps for how long and how much aid a person could receive, and well as instituting harsher punishments for recipients who did not comply with the requirements.

Investor’s Business Daily posted an editorial yesterday about the recently passed farm bill. The article notes that there was bi-partisan support for the farm bill.

How bad is the bill? Even Iowa Republican Sen. Charles E. Grassley, himself a farmer, was outraged because the package granted federal subsidies even to distant relatives of farmers that don’t farm.

…Scott Faber of the Environmental Working Group, a left-leaning environmentalist organization that has been critical of farm subsidies, notes that more than 1,000 “city slickers” who live in major American cities get farm subsidies. It’s absurd.

All in all, the nearly $1 trillion a year spent on farm subsidies and food aid is a massive waste, given that farmers on average have higher incomes than those who are taxed to subsidize them

As Chris Edwards of the Cato Institute points out, farm incomes in 2017 were 32% higher than average U.S. household incomes, while about 60% of subsidies for the three main farm programs went to the biggest 10% of farms. Welfare for the rich.

Meanwhile, the the new bill also provides “promotional funds” for farmers markets, research for organic farming, and money to train more farmers. It also grants more money to veteran and minority farmers. Everyone gets a handout, it seems, whether needed or not.

In our increasingly socialized farm economy, nearly everyone is too big to fail. Which means the rest of us pay for it. President Trump, focused on other things, will likely sign this awful Farm Bill. After all, it has that golden seal of congressional approval: It was “bipartisan.” All that means is both sides found ways to rip off taxpayers.

The bill did not include work requirements for food stamps recipients. The Republican Congress had one job regarding the farm bill…

Yesterday The Conservative Treehouse posted an article about an accusation against Judge Kavanaugh that has already been proven false.

Mr. Jeffrey Catalan accused Judge Brett Kavanaugh of assaulting a woman on a boat in Rhode Island. Mr. Catalan first sent the accusation to Senator Sheldon Whitehouse, one of the primary Democrat operatives who was helping to construct the attacks against Judge Kavanaugh. Senator Whitehouse simultaneously informed the media and the Judicary Committee of the allegations. Mr. Catalan later recanted his story, saying he made it all up.

The investigation may also include Senator Sheldon Whitehouse for assisting and promoting the false accusation:

WASHINGTON – The Senate Judiciary Committee today referred for criminal investigation apparent false statements made to committee investigators alleging misconduct by Judge Brett Kavanaugh. In a letter to Attorney General Jeff Sessions and FBI Director Chris Wray, Chairman Chuck Grassley sought a criminal review of the actions by a named individual who provided Congress with the information, diverting Committee resources from an ongoing investigation.

This is the part of the story that I think is interesting:

While Whitehouse referred the accuser to a reporter, the committee took the claim seriously and questioned Judge Kavanaugh about the allegations under penalty of felony. Judge Kavanaugh denied any misconduct. After the transcripts of that interview became public, the individual recanted the claims on a social media post.

Why would you refer the accuser to a reporter rather than have the committee quietly investigate the charges? If you refer the accuser to a reporter, you are letting the accuser know that the accusation is going to be made public without any confirmation of the charges. That is exactly what happened. It should also be noted that it is (possibly remotely) possible that Professor Ford did not want her name made public with the charges. However, our justice system provides that the accused be able to confront his accuser, so at some point her name was going to become public.

This was a false charge which the person making the charge admitted that he made up. It illustrates that damage that can be done to a public figure by someone who simply makes something up.

There are some legal aspects of the charges against Judge Kavanaugh that are being left out of the discussion. A lawyer friend of mine posted a few comments on the subject on Facebook: 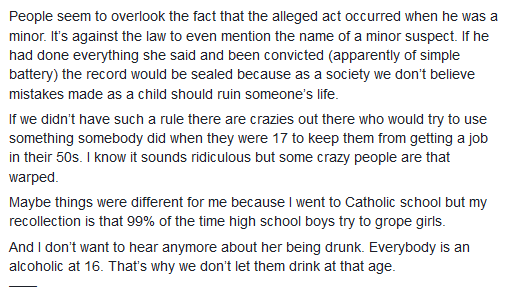 CNS News posted an article about the attempts to give the accused a chance to face his accuser.

Senate Majority Leader Mitch McConnell (R-Ky.) told a news conference Tuesday that Judge Brett Kavanaugh’s accuser “certainly does deserve a right to be heard,” but at the same time, he called it “disturbing” that Democrats decided to withhold her accusation until the last minute.

Later, an attorney for the accuser, told CNN’s Anderson Cooper her client “is prepared to cooperate with the committee” — but not on Monday, and not until the FBI does a full investigation. “There shouldn’t be a rush to a hearing,” attorney Lisa Banks said.

The FBI has already done extensive background checks on Judge Kavanaugh for his previous positions. None of these charges have ever surfaced. Now, when the Committee was ready to vote, the accuser comes forward, not remembering the year, the place, or how she got home. There is also a discrepancy between what she told her therapist and what she is saying now (four boys in the room instead of two boys in the room). The whole thing looks like a delay tactic. It is also really scummy to bring forth a thirty-five-year-old charge that cannot be proven one way or the other. The accuser has also refused to appear before Congress to confront Judge Kavanaugh until an FBI investigation has been conducted. There is no way the FBI can investigate a thirty-five-year-old charge where the accuser doesn’t know what year it was, where it was, and is fuzzy on the details. That is ridiculous.

This is a portion of Senator Grassley’s letter to Professor Ford’s attorney:

Ranking Member Feinstein first received a letter with allegations against Judge Brett Kavanaugh from Dr. Ford in July. However, Feinstein neglected to notify Committee Republicans of the letter until the day of the first Committee markup, six weeks after receiving the letter and well after the vetting and hearing process had concluded. Feinstein referred the letter to the FBI, which added it to Kavanaugh’s background investigation file. She should have treated these allegations seriously, as Grassley has done, in immediately acting upon hearing of them.

The FBI has indicated to the committee and in public statements that it considers the matter closed. The FBI does not make credibility determinations. The FBI provides information on a confidential basis in order for decision makers to determine an individual’s suitability. The Senate has the information it needs to follow up with witnesses and gather and assess the relevant evidence.

I have a few observations. I know the Republicans are afraid that if they move forward, they will lose the women’s vote in the mid-terms. I have a word for the Republicans. As many women can identify with the idea of a woman coming forward with a career-destroying accusation against their husband thirty-five years later as can identify with the accuser. If the Republicans do not move forward with the vote immediately, they will lose more votes in the mid-term than they gain. Radical feminists are not going to vote Republican anyway, and they are the only women who ascribe any credibility to this charade. Republicans, this is your moment–either you have a spine or you don’t. If you don’t, you will lose more votes than you will gain.

Yesterday, John Hinderaker posted an article at Power Line about the Senate hearings and investigations resulting from the Inspector General’s Report.

He is specifically under investigation for his handling of memos he wrote about interactions with President Trump while FBI director.
***
“Question number one, Mr. Horowitz, are you investigating the handling of his memo and does that include the classification issues, and should Mr. Comey expect a report when it’s complete?” Grassley asked.

“We received a referral on that from the FBI. We are handling that referral and we will issue a report when the matter is complete, consistent with the law and rules that are — a report that’s consistent and takes those into account,” Horowitz responded.

This is a public acknowledgement given by the Inspector General that James Comey mishandled classified information. It will be interesting to see whether Mr. Comey is held to the same legal standard that any other American would be held to.

The article also notes in an update:

More news from today’s Judiciary Committee hearing. James Comey declined to appear to testify, and his deputy, Andrew McCabe, asserted his privilege against self-incrimination in refusing to testify. Loretta Lynch also refused to appear before the committee.

Senator Grassley said that he wanted to issue subpoenas to compel the testimony of these three witnesses, but was blocked from doing so, under Senate rules, by ranking member Dianne Feinstein. The Democrats are furiously sticking their fingers into holes in their dyke.

Sometimes when you pull a thread on a sweater, the entire sweater unravels. One can only hope that is what is happening here. I think it is very telling that the Democrats prevented the issuing of subpoenas which would have forced the testimony of James Comey, Andrew McCabe and Loretta Lynch. Once someone in authority begins to pull the right thread, we will find out exactly how corrupt the FBI and the DOJ have become in recent years.

The Conservative Treehouse posted an article today about the Inspector General‘s Report regarding the Justice Department decisions during the 2016 election campaign.

The comprehensive IG final draft report on the FBI handling of the Clinton investigation was circulated for principal feedback on May 16th. Following typical timelines of IG ‘draft reports’ we anticipated the Final Report release around the first week of June.

Well, Senator Chuck Grassley has just scheduled a hearing on the release for next Tuesday June 5th. So anticipate the final publication and public release any day now.

We are about to find out if we actually have the equal justice under the law that we are promised in our Constitution.

My Way News is reporting today that the Internal Revenue Service (IRS) is about to pay $70 million in employee bonuses. In April, a directive written by Dannie Weffel, a former budget official who has since been appointed acting IRS commissioner,  cancelled discretionary bonuses because of spending cuts.

Sen. Chuck Grassley of Iowa says his office has learned that the IRS is executing an agreement with the employees’ union on Wednesday to pay the bonuses. Grassley says the bonuses should be canceled under an April directive from the White House budget office.

So let me get this straight–because of sequestration, school children cannot tour the White House, but IRS employees get $70 million in employee bonuses, and the President and his family tour the world for $100 million.

Is it time for new elected officials yet????