We all need to be on the alert for voter fraud or elections fraud in November. The Democrats are already using social media for ‘dirty tricks’ to keep down the attendance at Trump rallies. Who knows what they will do in the election?

TikTok users and K-pop fans claim they reserved hundreds of tickets for Donald Trump‘s Tulsa rally on Saturday night with no intention of attending.

Political strategist Steve Schmidt, an outspoken critic of Trump, tweeted on Saturday night: ‘My 16 year old daughter and her friends in Park City Utah have hundreds of tickets. You have been rolled by America’s teens.

‘@realDonaldTrump you have been failed by your team. You have been deserted by your faithful. No one likes to root for the losing team.’

‘They even blocked access to the metal detectors, preventing people from entering. Thanks to the 1,000s who made it anyway!’

News outlets would probably have dismissed as conspiracy theory the notion that people – liberal wackos, American teenagers, KPop fans, and even foreigners – gamed the Trump Tulsa rally by reserving tickets that they had no intention of using in order to deliberately drive down the attendance and crowd size, had it been Trump who brought it up.

But Alexandria Ocasio-Cortez not only admits that it happened, she’s THRILLED about it. In tweets on Saturday she directly taunted Trump about it and praised those who did it.

…Oh so it’s all cool then? Russians on Facebook is the END OF DEMOCRACY but teenagers and anonymous users foreign and domestic using China’s TikTok app to prevent people from attending the other party’s campaign event is some great and wonderful thing? Remember when they bashed Rush Limbaugh as unpatriotic and possibly Satan for suggesting interfering in Democratic primaries?

“Shout out to Zoomers. Y’all make me so proud,” Ocasio-Cortez added.

“KPop allies, we see and appreciate your contributions in the fight for justice too,” the congresswoman wrote.

…Many of those participating in the alleged scam deleted their posts after 24 to 48 hours in a bid to limit word of the plan from spreading on mainstream social media, the Times report said.

“These kids are smart and they thought of everything,” Daniel told the paper.

This is simply disgusting. It is foreign election interference although those responsible will never be charged. If Americans want to see fair play in the election season, they are going to have to stop voting for people who brag about doing things like this.

On Wednesday Real Clear Politics posted an article titled, “What the ‘Obamagate’ Scandals Mean and Why They Matter.” The article lists and details the scandals and why they matter. I will list them and then share the conclusion. Please follow the link to the article for further details.

The article lists the scandals:

Scandal No. 1: Massive, illegal surveillance of American citizens, using the database of the National Security Agency

Scandal No. 2: Spying on the Trump campaign

Scandal No. 3: Covering up this spying, continuing it during the new administration, charging that Trump was not legitimately elected, and impeding his presidency with major investigations, based on false charges

Obama officials worked especially hard to remove incoming National Security Adviser Michael Flynn. Because Gen. Flynn was an experienced intelligence officer, he would surely uncover the surveillance of Trump’s campaign and transition and stop its continuation against the new administration. He had to go. Now we know just how low the Obama administration and Comey FBI sunk to make that happen: spying, unmasking, leaking classified phone calls, discarding FBI protocols to set up an entrapment interview based on a meaningless “legal violation,” and telling Trump directly, as Obama did, not to hire Flynn.

Beyond this destructive mission, Brennan loyalists at the CIA burrowed into Trump’s National Security Council while the FBI tried to plant agents in the White House itself. Most important of all, the Obama team and their congressional allies helped launch multiple, full-scale investigations of “Russian collusion” with no solid basis, plenty of contrived “evidence,” and breathless media headlines. It all failed, but not before it damaged Trump’s presidency and the basic tenets of liberal democracy.

It’s an ugly picture, one that goes beyond dirty tricks and the normal bounds of “loyal opposition.” We still have a lot to learn, but we already know a great deal. We know how grave the three scandals were. We know they fit together, forming something much larger. With each new tranche of declassified documents, we see something big and hideous emerging from the Swamp, a political scandal of profound import.

This information needs to be shouted to the American people. There are many Americans who still believe that President Trump did collude with the Russians, and they need to be told the truth. No one likes to admit that they believed a lie, but it is time to educate the American citizens on what the truth actually is.

Breitbart posted an article today with the following headline:

Russian Lobbyist at Don Jr. Meeting Says He ‘Might’ Have Seen John McCain at Summit Where Senator Learned of ‘Pee’ Dossier

Wow. What an incredible coincidence.

Russian-born Washington lobbyist Rinat Akhmetshin says he might have spoken to McCain and the senator’s assistant David J. Kramer at the Halifax International Security Forum in 2016. However, Akhmetshin claimed that he did not discuss the dossier with McCain or Kramer, and that he didn’t know about the existence of the controversial dossier.

The information raises immediate questions about the possibility of dirty tricks in arranging the infamous Trump Tower meeting. This considering a recent Breitbart News report that email transcripts and other information disclosed in Akhmetshin’s testimony reveal a significant relationship between the lobbyist and the controversial Fusion GPS firm that produced the infamous, largely discredited anti-Trump dossier.

It was at the security conference in Canada in November 2016 that McCain says he was approached by Sir Andrew Wood, a former British ambassador to Moscow and friend of ex-British spy Christopher Steele, the author of the dossier.

Wood briefed McCain and Kramer, a former State Department official and longtime McCain associate who agreed to meet Steele in London for a fuller briefing on the dossier contents.

The Washington Post reported in February that after meeting with Steele, Kramer went to Washington and received the dossier document directly from Fusion GPS. McCain then passed the dossier to FBI Director James Comey.

In a New York Times oped in January, GPS co-founders Glenn Simpson and Peter Fritch wrote that they helped McCain share their anti-Trump dossier with the Obama-era intelligence community via an unnamed “emissary.”

Please follow the link above to read the entire article. It is becoming obvious that members of both parties were involved in the ‘insurance policy’ to derail the Trump administration. This actually makes sense when you realize the threat President Trump is to both parties–if an outsider who is not part of the ‘in crowd’ can be successful in Washington, the power of both political parties will be diminished. Most of the people in Congress are there to increase their power–not to have it diminished. We can only hope that the few members of Congress who love America more than they love their own power can drain the smelly swamp Washington has become.

Politics is a nasty business, particularly just before the primary elections. You really cannot believe anything you read or see. Sometimes, however, the dirty tricks are not well thought through and strange things happen. The picture below taken from the Young Conservatives website is one example of a dirty trick that should have been better planned: 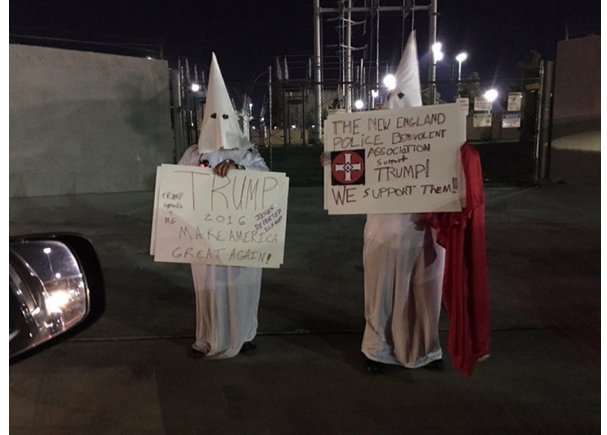 Now maybe I missed something (which is quite possible), but I wasn’t aware that the KKK membership was now open to black people. Look closely at the picture. At least one of the alleged KKK sign holders is black. It makes you wonder who is actually responsible for this protest (or whatever it is).