NBC News posted a story about the rather unique hazards Olympic golfers will face on the golf course in Rio.

This is a picture of one of the hazards: 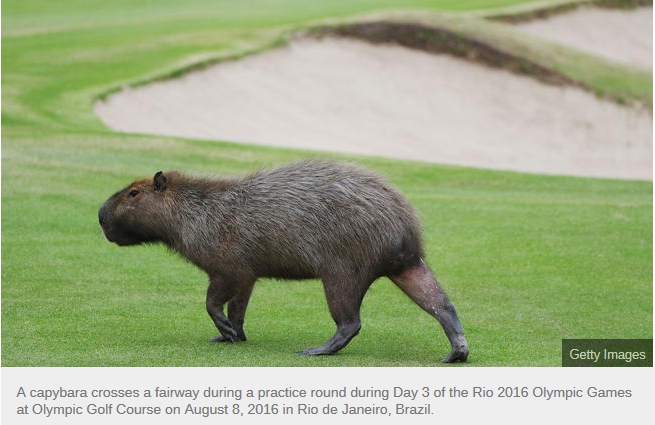 Also found on the golf course are owls, two-toed sloths, monkeys and a small crocodile. I think I would take up a different sport.

The Washington Examiner is reporting today that Brazil is looking for a former Guantanamo detainee who entered Brazil and then dropped from sight.

Abu Wa’el Dhiab, who was released in Uruguay in December 2014 after twelve years spent in detention, has vanished after purportedly entering Brazil. Uruguayan authorities claim he was authorized to visit the country as a refugee, but Brazil has no record of his arrival.

According to a report by the Argentinian publication “Infobae,” Avianca Airlines issued an internal alert notifying its employees that the 44-year-old Syrian may be using a passport under a fake name. The airline has refused to provide further comment.

Dhiab was arrested by Pakistani police in 2002 before being sent to Gitmo, but never charged with a crime. He spent seven years protesting his detention with a hunger strike, suffering health problems as a result. He was finally cleared for release in 2009, a move that received great fanfare from civil liberty advocates.

My first thought upon reading this was concern for the Summer Olympics in August, but the article cites another concern:

His disappearance is of particular concern this week, as terrorist attacks around the globe ramp up as the month of Ramadan winds down. It is anticipated that adherents of the Islamic State will view July 6 as perhaps the most valued day of the year for perpetrating acts of terror.

This is an example of why Guantanamo prison needs to stay open and the terrorists there need to stay there. Rehabilitating a terrorist is nearly impossible. Their indoctrination begins at birth and asking them to disavow everything they have ever been taught is not realistic. The book The Blood of Lambs by Kamal Saleem provides a lot of insight as to how a terrorist is taught and trained. I strongly recommend reading it. Meanwhile, we need to keep terrorists in Guantanamo.

CNN posted an article today about the detention of David Miranda at London’s Heathrow Airport when Mr. Miranda was returning to his home in Brazil. Mr. Miranda lives and works with Glenn Greenwald, the man who released the information Edward Snowden collected regarding government surveillance in America and England.

Greenwald’s partner, 28-year-old David Miranda, was held for nearly nine hours. He was reportedly passing through the airport on his way home to Brazil after leaving Berlin. Authorities seized his laptop, phone, and other materials.

The White House knew the move was coming.

“There was a heads up that was provided by the British government,” White House spokesman Josh Earnest said Monday.

So the United States knew it “was likely to occur, but it’s not something that we’ve requested and it’s something that was done specifically by the British law enforcement officials there,” he said.

He would not comment on whether the United States has obtained material from Miranda’s laptop — and would not say whether President Obama condemns the detention.

The Guardian also posted this story today. Their article stated:

David Miranda‘s detention should be seen in the context of the implicit acceptance by the Home Office, which is bringing forward the current changes, that parts of the law are too sweeping. But Mr Miranda’s detention is extraordinary nevertheless. It raises important new issues that parliament cannot now ignore and will have to debate if its terrorism law reform bill is to be in any way meaningful, just or proportionate.

Part of this is because there is not the slightest suggestion that Mr Miranda is a terrorist. But Mr Miranda does live with and work with Mr Greenwald, who has broken most of the stories about US and UK state surveillance based on leaks from the NSA whistleblower Edward Snowden. None of that work involves committing, preparing or instigating acts of terrorism, or anything that could reasonably fall within even the most capacious definition of such activities. Yet anyone who imagines that Mr Miranda was detained at random at Heathrow is not living in the real world.

This is alarming. Whether you see Edward Snowden as a hero or a traitor, there was no reason to detain Mr. Miranda. There was also no reason to seize his computer, cell phone, and other possessions. There was no suspicion that Mr. Miranda was a terrorist–he was simply guilty of partnering with Glenn Greenwald. The government needs expanded power to deal with terrorists at border locations–airports, etc.–but it needs to use those powers carefully. This is not the way free societies should act.

Johnson (Charles Johnson) starts with what Thatcher often said was her greatest accomplishment, which was not her work in helping to topple the Soviet Union or being the first British woman to hold the post of prime minister, but rather, was her work as a child to save a Jewish teenager in Austria from the grasp of Hitler’s terror.

The story begins in 1938 when Edith Muhlbauer, a 17-year-old Jewish girl, wrote a letter to Muriel Roberts, Edith’s pen pal and the future prime minister’s [Margaret Thatcher] older sister. The letter expressed fear that as Hitler began rounding up Jews in Austria that her family would be included in those round-ups. The Roberts family did not have the means to take Edith in, and Margaret, then 12, and Muriel, 17, set about raising funds and persuading the local Rotary club to help. Edith stayed with a number of Rotary families for about two years until she was able to go to South America to join relatives.

Had the Roberts family not intervened, Edith recalled years later, “I would have stayed in Vienna and they would have killed me.” Thatcher never forgot the lesson: “Never hesitate to do whatever you can, for you may save a life,” she told audiences in 1995 after Edith had been located, alive and well, in Brazil.

Prime Minister Thatcher showed courage and determination even as a young adult. It is no wonder that she grew up to be the “Iron Lady.”

I am not a fan of the United Nations to begin with–I think it has lost its way from its original purpose and become a forum for thugs and tyrants rather than a forum to promote freedom. Because of this, I really do not like the amount of money America contributes to this organization. But let’s look at who finances the United Nations.

On Friday, CNS News posted some of the details of the United Nations funding. The article reports:

The 193 U.N. member-states’ contributions are assessed according to their relative “capacity to pay,” based on population size and gross national income (converted to U.S. dollars at market exchange rates). The ceiling is 22 percent while the bottom level is 0.001 percent, which over the next three years will apply to more than 30 of the world’s poorest countries.

The United States has paid 22 percent of the total regular budget every year since 2000, and will now continue to do so for the next three years. The U.S. pays 25 percent of the separate peacekeeping budget.

Some developing countries have seen relatively significant increases in their assessments: China, the world’s second-largest economy, will pay 5.15 percent, up from 3.12 last time; the Russian contribution has risen to 2.44 percent from 1.60 percent; Brazil’s 2.93 percent is an increase from 1.61.

India’s increase in U.N. contributions is more modest – from 0.53 to 0.66 percent – while Japan, Canada and European countries including Britain, France, Germany, Italy and Spain will contribute a smaller percentage over the next three years than they have over the past three.

The United Nations General Assembly has approved a two-year U.N. budget of $5.4 billion.

I really think it is time to remove the United Nations from New York City and to remove America from the United Nations. If we want an international organization to support peace and freedom, we should form one with the democracies of the world and leave the thugs and tyrants out of it.

Hot Air posted an article today about the status of the oil exploration that the Obama Administration loaned Brazil’s oil company Petrobras $2 billion to support.

President Obama stated at the time the money was given to Brazil:

“We want to work with you. We want to help with technology and support to develop these oil reserves safely, and, when you’re ready to start selling, we want to be one of your best customers.”

The United States wants it, but China is getting it.

Less than a month after President Obama visited Brazil in March to make a pitch for oil, Brazilian President Dilma Rousseff was off to Beijing to sign oil contracts with two huge state-owned Chinese companies.

This is not good news. When America has a weak President, bad things happen.

The Italian newspaper Corriere della Sera is reporting that Hezbollah has opened a center of operations in Cuba. This was reported on Thursday by YNET News. The article states that a Cuban operations base is being set up in order to expand terrorist activity in South America and to facilitate an attack on an Israeli target in South America.

According to the article at YNET News:

The operation, titled “The Caribbean Case,” was reportedly allocated a budget of $1.5 million. The Cuba base is to be initially used for logistics purposes, including intelligence collection, networking and document forgery.

The attack being planned on an Israeli target is said to be in retaliation for the death of Hezbollah commander Imad Mughniyeh, which Hezbollah claims Israel is responsible for.

The article in the Italian newspapers reports that Hezbollah has been active in South America for some time, mainly in Paraguay, Brazil and Venezuela.

We need to remember that right now there is a large part of the world that is simply not friendly to the idea of democracy or freedom. There are leaders in foreign countries that would like to take away the freedom of Americans rather than granting freedom to their own citizens.

The problem with a Hezbollah base in Cuba is the ease of crossing America’s southern border. This is a link to a response to a Judicial Watch Freedom of Information Act request showing the native countries of people arrested for trying to enter America illegally. We need to keep track of who is entering our country.