On Wednesday, WattsUpWithThat posted an article about a new paper authored by glaciologists Bohleber et al, 2020 of the Austrian Academy of Science.

Dr. Sebastian Lüning earlier today released his latest Klimaschau report, No. 6. In the first part he looks at glaciers in the Alps over the course of much the Holocene.

It turns out that Most of the Alps were ice-free 6000 years ago, glaciologists have discovered.

In his video, the German geologist presents a new paper authored by glaciologists Bohleber et al, 2020 of the Austrian Academy of Science. The Austrian-Swiss team discovered from ice cores that the 3500-meter high Weißseespitze summit was ice free 5900 years ago.

Much warmer in the early Holocene

Lüning next shows why the Alps were ice-free 6000 years ago by using a chart by Heiri et al 2015, which shows it was some 2°C warmer than today.

Beginning some 10,000 years ago, after the Ice Age ended, all glaciers below 4000 meters elevation in the East Alps melted away over the years that followed. Then beginning 6000 years ago, cooling started again and the glaciers returned (neoglaciation). Today temperatures in the Alps are still well below early Holocene levels.

Please follow the link above for further information and to see the charts. This information is particularly relevant as the future Biden administration plans to reenter the Paris Climate Accord. This will cripple the American economy yet do nothing to curb the major air polluters India and China. This is an instance where we truly need to follow the science and realize that the earth’s climate is always changing and that we are not in charge of it. Cleaning up the air is a good idea, but we have been doing that during the past four years in America. 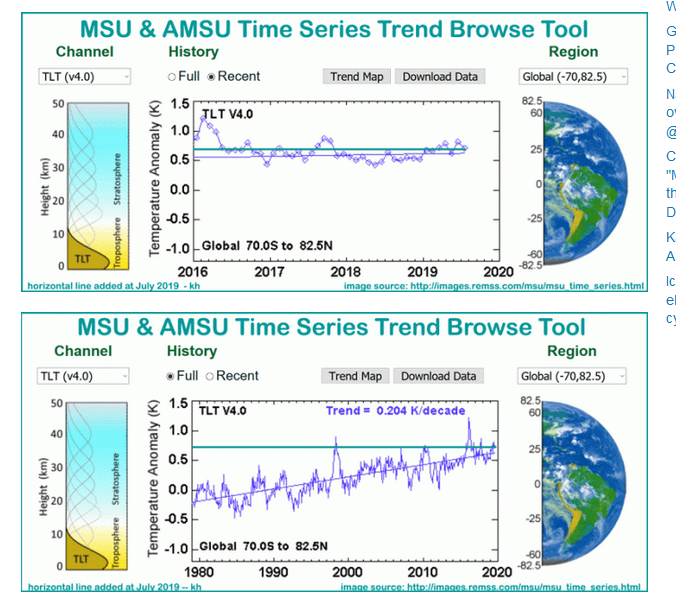 This is a screenshot taken from wattsupwiththat yesterday: 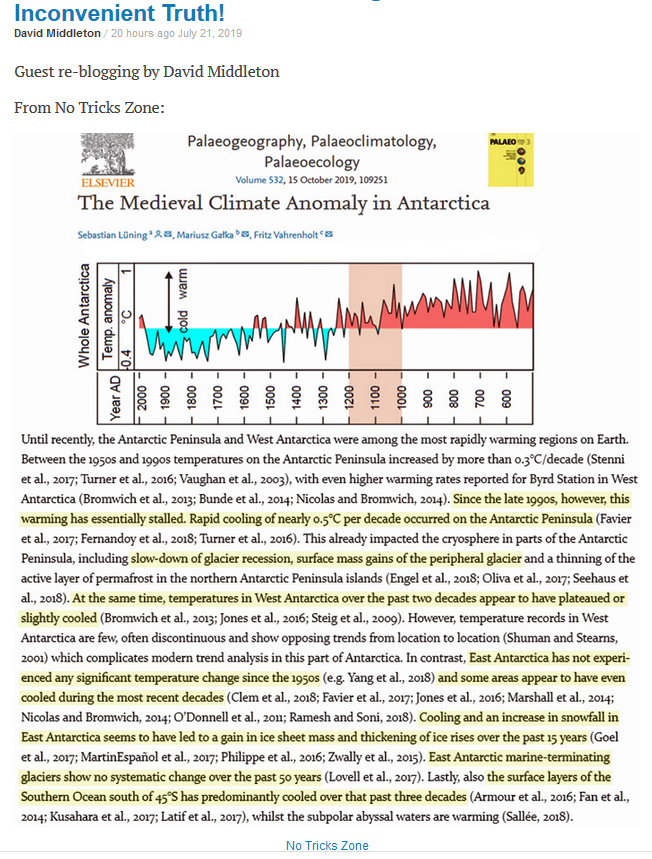 The full paper can be downloaded here: The Medieval Climate Anomaly in Antarctica.

I guess it was warmed by all those penguins driving around in their SUV’s.

In August 2018 (yes, I know that was last year, but I missed this), The Climate Change Dispatch posted an article with the following headline, “Multiple NASA Studies Confirm Bedrock Heat Flow Behind Melting Polar Ice, Not Global Warming.” Wow. Who knew?

The article includes the following photo: 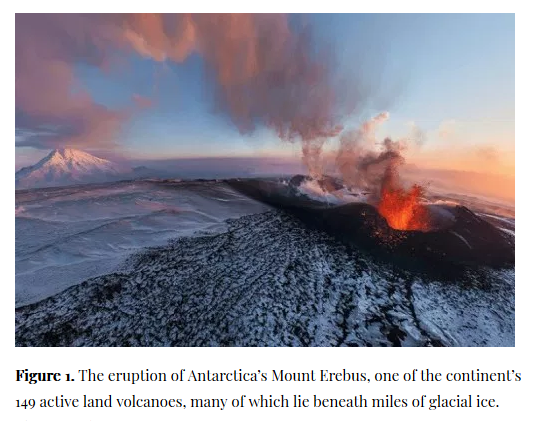 In what amounts to dissension from National Aeronautics and Space Administration (NASA) climate change policy, a series of just-released studies by working-level scientists prove that geological and not atmospheric forces are responsible for melting of Earth’s polar ice sheets.

This research study authored by NASA Glaciologist Jay Zwally concluded that Antarctica is gaining, not losing, ice mass and thereby challenging the conclusions of many previous studies, most importantly the Intergovernmental Panel on Climate Change’s (IPCC) 2013 report (see the quote from the study below).

“A new NASA study says that an increase in Antarctic snow accumulation that began 10,000 years ago is currently adding enough ice to the continent to outweigh the increased losses from its thinning glaciers.

“The research challenges the conclusions of other studies, including the Intergovernmental Panel on Climate Change’s (IPCC) 2013 report, which says that Antarctica is overall losing land ice.

The conclusions of this NASA study were immediately challenged by numerous climate activist groups and biased media outlets (see here). These challenges have since been proven incorrect for several reasons.

The results of this follow-up study are bolstered by two other NASA research studies.

The first, dated January 1, 2018, shows that East Antarctica has for many years been accumulating huge amounts of snow that compact into ice and increasing overall ice mass (see here).

The second NASA study released on July 19, 2018, showed that the atmosphere above the Antarctic Continent has been continuously cooling and not warming for many years (see here).

Obviously, it’s impossible to melt Antarctica’s glaciers via atmospheric warming when the atmosphere is not warming.

Lastly, a NASA study dated Feb. 20, 2018, concludes that outflow of East Antarctic glaciers into the ocean is stable and not increasing (see here). This is proof that East Antarctica’s ice mass is not being diminished by glacial outflow into adjacent oceans.

When you read an article about man-made climate change, consider the following:

In March 2016, I posted an article with the following:

…Then listen to the words of former United Nations climate official Ottmar Edenhofer:

It’s really not about the climate.

A new Policy Brief from The Heartland Institute shows there is no evidence of acceleration in the rise of global sea levels since the 1920s and concludes the U.N. Intergovernmental Panel on Climate Change’s (IPCC) concerns over this issue is “without merit.”

The Policy Brief, titled “Global Sea Level Rise: An Evaluation of the Data,” authored by Dr. Craig Idso, chairman of the Center for the Study of Carbon Dioxide and Global Change, Dr. David Legates, professor of climatology in the Department of Geography at the University of Delaware, and Dr. S. Fred Singer, is taken from a chapter of Climate Change Reconsidered II: Fossil Fuels, a report fromthe Nongovernmental International Panel on Climate Change (NIPCC).

According to IPCC’s Fifth Assessment Report, “it is very likely that the rate of global mean sea level rise during the 21st century will exceed the rate observed during 1971–2010 for all Representative Concentration Pathway (RCP) scenarios due to increases in ocean warming and loss of mass from glaciers and ice sheets.”

However, Idso, Legates, and Singer argue “sea-level rise is a research area that has recently come to be dominated by computer models. Whereas researchers working with datasets built from long-term coastal tide gauges typically report a slow linear rate of sea-level rise, computer modelers assume a significant anthropogenic forcing and tune their models to find or predict an acceleration of the rate of rise.”

…Instead of accelerated sea-level rises, the authors find “the best available data” shows “evidence is lacking for any recent changes in global sea level that lie outside natural variation.” They point out that if the negative effects of the claimed accelerated rise in sea level, such as a loss of surface area, were to be visible anywhere, it would most likely be in the small islands and coral atolls in the Pacific Ocean. However, research indicates many of these islands and atolls are actually increasing in size. Simply, they are “not being inundated by rising seas due to anthropogenic climate change.”

Fears of an accelerated rise in sea levels caused by anthropogenic climate change are misplaced and overblown. Further, this fearmongering should not be used by policymakers in coastal states and cities to advocate for policies that would seek to limit or eliminate carbon dioxide emissions.

No, we are not all going to drown in five years because of sea-level rise. Some politicians are screaming ‘the sky is falling’ because they believe it will get them the votes of young people who are not scientifically schooled. The earth’s climate is cyclical, we are in a cycle. There will be another cycle. We need to do what we can to limit pollution, but in the end, we are not important enough to make a significant difference. Pride is one of the things the fuels the extreme environmental movement.

The following is from an article posted at WattsUpWithThat on Saturday: 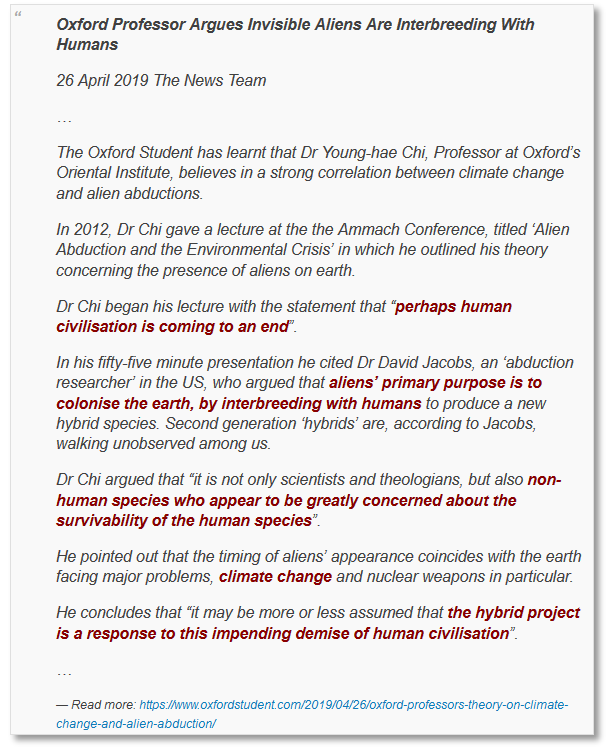 There is nothing I can say to add to this.