Stephen Moore posted an article at Real Clear Politics today about global pollution. Remember all the hysteria when America didn’t sign the Kyoto Treat and didn’t institute a cap-and-trade carbon tax? Well, evidently Americans cared enough about keeping the air clean to reduce carbon dioxide emission on their own.

Yet the latest world climate report from the BP Statistical Review of World Energy finds that in 2017, America reduced its carbon emissions by 0.5 percent, the most of all major countries. That’s especially impressive given that our economy grew by nearly 3 percent — so we had more growth and less pollution — the best of all worlds. The major reason for the reduced pollution levels is the shale oil and gas revolution that is transitioning the world to cheap and clean natural gas for electric power generation.

Meanwhile, as our emissions fell, the pollution levels rose internationally and by a larger amount than in previous years. So much for the rest of the world going green.

The world’s largest emitter of carbon dioxide emissions is China. According to the invaluable Institute for Energy Research, “China produces 28 percent of the world’s carbon dioxide emissions. India is the world’s third-largest emitter of carbon dioxide and had the second-largest increment (93 million metric tons) of carbon dioxide emissions in 2017, more than twice as much an increase as the U.S. reduction.” This means it doesn’t really matter how much America reduces its greenhouse gases because China and India cancel out any and all progress we make. Those who think they are helping save the planet by purchasing an electric car or putting a solar panel on their roof are barking up the wrong tree. There is no way to make progress on greenhouse gases without China and India on board — which they clearly are not.

It is basically ironic that China and India, both countries that signed the Kyoto Treaty, have increased their carbon dioxide to the point where they are cancelling out the gains made by America.

So there you have it. The countries in the Paris climate accord have broken almost every promise they’ve made and the nation (the U.S.) that hasn’t signed the treaty is doing more than any other nation to reduce global warming. Yet, we are being lectured by the sanctimonious Europeans and Asians for not doing our fair share to save the planet. It’s another case study in how the left cares far more about good intentions than actual results. What matters is that you say that you will wash the dishes, not that you actually do it.

Unfortunately the war on carbon has never been about making the earth a cleaner place–it has always been about money. The Chicago Climate Exchange was set up in 2003 so that powerful Democrats could make a ton of money once cap-and-trade legislation was passed in America. It closed in 2010 when the legislation was not passed, and those Democrats lost their investment. Its two biggest investors were Al Gore’s Generation Investment Management and Goldman Sachs–and President Obama, who helped launch CCX with funding from the Joyce Foundation, where he and presidential advisor Valerie Jarrett once sat on the board of directors. Had cap and trade gotten through Congress, all of those people would have made a lot of money. That is one of many reasons why they supported the legislation–clean air was simply a side issue. (References here and here).

A lot of people have lost faith in the mainstream media as a source of information. Many of my friends have cancelled their subscriptions to various newspapers. So what is going on? The Internet has given people a chance to do their own research and draw their own opinions. One example of media hype of something that is questionable at best is the way the media has handled the concept of man-made global warming. Despite little scientific evidence to support the claim, our government is shutting down power plants, causing the price of utilities to rise, and trying to control the lives of the American people in ways our founding fathers never intended.

Yesterday John Hinderaker at Power Line posted an article with a graph showing the difference between actual global temperatures and what global warming proponents have predicted in the past.

The Science and Environmental Policy Project does a good job of explaining this fundamental point in its Climate Fears and Finance:

By far, the most rigorous, comprehensive data on global temperatures come from satellite measurements of the atmosphere (mid-troposphere), which is where the greenhouse effect takes place. The measurements started in December 1978 and the temperature estimates are calculated by two independent groups, who closely agree. These data are independently supported by four sets of direct temperature measurements from weather balloons. …

We can see below the direct comparison between 102 model runs and observations. 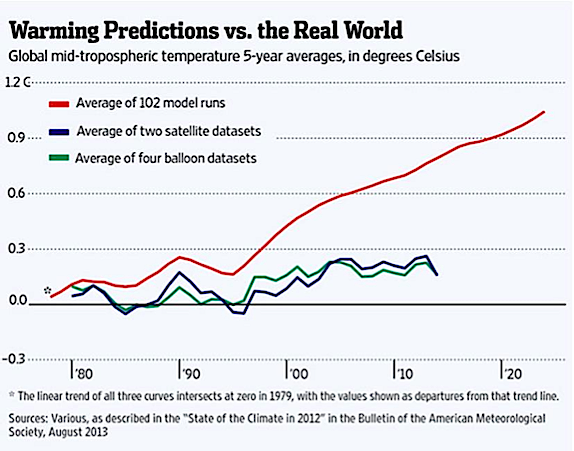 The differences in the data are obvious. So why are many journalists and people in power trying to convince us that man-made global warming is real? Follow the money. I posted an article in 2010 (rightwinggranny.com) about the Chicago Climate Exchange (CCX). This was a carbon credit exchange heavily invested in by many political leaders. When cap and trade legislation was defeated, the CCX went out of business and many political leaders lost money. Unfortunately, the people we send to Congress are not always looking out for our interests.

One of the things that is supposed to make our government work is transparency. With the Freedom of Information Act, we the taxpayers can follow the path of a concept as it is discussed and eventually made into some sort of law. That transparency is supposed to be part of the system–except when it is purposely avoided.

Yesterday wattsupwiththat.com posted a story stating that the Competitive Enterprise Institute (CEI) “has learned of a UN plan recently put in place to hide official  correspondence on non-governmental accounts, which correspondence a federal inspector general has already confirmed are subject to FOIA. This ‘cloud’ serves as a dead-drop of sorts for discussions by U.S. government employees over the next report being produced by the scandal-plagued IPCC, which is funded with millions of U.S. taxpayer dollars.”

The article at wattsupwiththat states:

CEI reminds OSTP (Office of Science and Technology Policy) that this practice was described as “creat[ing] non-governmental accounts for official business”, “using the nongovernmental accounts specifically to avoid creating a record of the communications”, in a recent analogous situation involving lobbyist Jack Abramoff. CEI expects similar congressional and media outrage at this similar practice to evade the applicable record-keeping laws.

This effort has apparently been conducted with participation — thereby direct assistance and enabling — by the Obama White House which, shortly after taking office, seized for Holdren’s office the lead role on IPCC work from the Department of Commerce. The plan to secretly create a FOIA-free zone was then implemented.

Man-made global warming is a hoax perpetrated by the Obama Administration to pave the way for a government takeover of the energy sector. The government policies that would be enacted in the name of global warming will make all Americans poorer (except those invested in green energy). This is truly a ‘follow the money’ issue. Had the Cap and Trade bill been passed in Congress, the demand for solar panels made by Solyndra would have increased, Solyndra would have raised its prices, and many democrat contributors would have made a profit. Had Cap and Trade passed, the Chicago Climate Exchange (CCX), which traded carbon credits would still be in business and investors such as Al Gore and many of our leading congressmen would have made a profit. If Cap and Trade can be implemented through federal agencies, it may not be too late to save the portfolios of some of the major Democrat contributors. It really is all about the money.

Please follow the link to wattsupwiththat.com to read the entire article. There is a lot of very good, but very technical information in the article that I did not fully understand. Hopefully it will make sense to you!