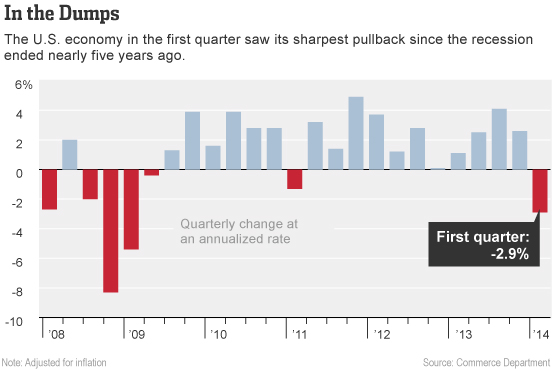 Katie Pavlich posted an article at Townhall.com today about the revised Gross Domestic Product (GDP) number from the first quarter of 2014. Initially, the  GDP growth number was listed at just .01 percent. That number has been revised downward to -1 percent. If the GDP number shrinks two quarters in a row, the economy is considered to be in a recession. 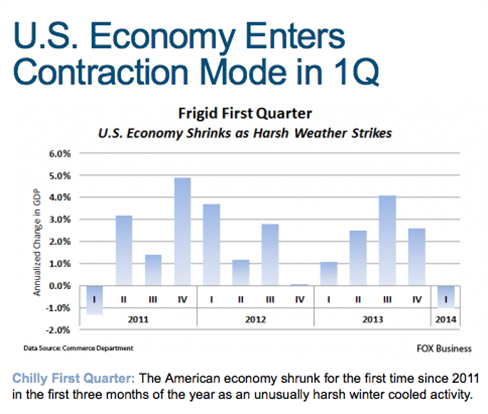 It is time for the Obama Administration to examine its economic policies. One way to boost the economy would be to approve the Keystone Pipeline and begin to develop America’s energy resources. 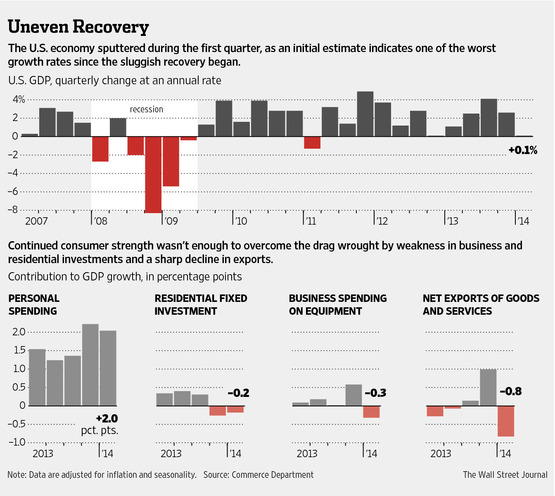 The Wall Street Journal reported that the Gross Domestic Product grew at a seasonally adjusted annual rate of 0.1% in the first quarter of 2014.

The article in the Wall Street Journal explains some of the factors responsible for the low economic growth. Some suggested causes were the extremely cold winter which slowed consumer spending, and the sudden drop in exports, declining at a 7.6% pace in the first quarter.

Obviously, this is not the robust economy the President has been claiming.

On Friday the Washington Times posted a story about the Obama economy. As I am sure you remember, when the government announced that the economy had grown 3.2 percent in the last months of 2013, economists announced that America was well on its way to prosperity. Well, not so fast.

However, according to a revised estimate released Thursday by the U.S. Commerce Department’s Bureau of Economic Analysis, that 3.2 percent figure was a wild exaggeration.

The U.S. gross domestic product (GDP), the broadest measure of our country’s entire economic output, grew no more than 2.6 percent in the fourth quarter — a pitifully low growth rate for the largest economy in the world.

So what happened? Part of the reason for the lack of growth is that personal income has not grown for several months, putting a damper on consumer demand. Also, 2013 brought higher taxes to all income levels–some hidden taxes included in ObamaCare like the medical devices tax. High earners also faced increased capital gains taxes, which slowed risk taking and job growth. In February, contracts to buy new homes fell for the eighth month in a row.

Unless something happens to cause President Obama to change his policies, we will have three more years of a non-recovery recovery., If you are not happy with the direction the country is moving in, you need to voice your opinion at the ballot box in November. A Republican Senate may be able to reverse enough of this to get the economy moving.

This video was sent to me with a note from a friend who is working to save the fishing industry in New England. The video is from YouTube.

These are the comments included with the video:

Since he was sworn into office, Scott Brown has probably been one of the most tireless workers for the MA and New England fishing industry that I have ever seen. In just a short time, he has done more for the fishing industry than many other Representatives and Senators have during their entire careers in office. I would say, including John Kerry. As soon as he was elected, he went right after NOAA, the agency that enforces fishing regulations, for abuse in their enforcement department. In this department, an investigation by the Inspector General of the Dept. of Commerce exposed unthinkable abuses that had been complained about by fishermen for a long time, but swept under the rug by the agency. Although the report exposed some nasty facts, nothing was ever done about it. Scott Brown did not take that lightly and even compiled an entire presentation he revealed on the Senate floor, which can be watched on the video above. As far as I am aware, no other Senator has ever done this for any fishery issue. Senator Brown has repeatedly called for disciplinary action within the fishing regulatory agency, NOAA, and for the removal of its chief, Jane Lubchenco. He has been responsive to calls and requests of the fishing industry, taken time to send people from his office to meet with fishing industry businesses, and has taken seriously the need for action on its behalf. The fishing industry needs Scott Brown, because he really is on our side.