Yesterday The Daily Caller posted an article with the following headline, “Mueller Investigation Trump Over $150K Donation From Ukrainian Who Gave Clintons $13 Million.”

The special counsel’s office is investigating a $150,000 donation a Ukrainian businessman made to President Donald Trump’s charity in 2015, according to a new report.

The donation, from steel magnate Victor Pinchuk, pales in comparison to contributions he gave to the charity Bill and Hillary Clinton set up. The billionaire has contributed $13 million to the Clinton Foundation since 2006 and had access to Hillary Clinton while she served as secretary of state.

But Special Counsel Robert Mueller is not investigating The Clintons. Instead, he is conducting a broad investigation of Donald Trump, including the flow of foreign money into various Trump-controlled entities.

Mueller began investigating the Pinchuk donation after receiving documents in response to a subpoena issued to the Trump Organization — the real estate company Trump ran before entering politics.

In September 2015, Trump appeared via video link at a conference Pinchuk hosted in Kiev. Trump’s personal attorney, Michael Cohen, negotiated details of the event with Douglas Schoen, a former consultant for Bill Clinton, according to The New York Times. Trump did not initially request payment for the appearance, but Cohen contacted Schoen at one point to request a $150,000 honorarium, The Times reported.

The last sentence of the article states:

The FBI reportedly investigated the Clinton Foundation over its foreign donations. The status of that investigation is unclear.

I may be cynical, but I suspect that 50 years from now the status of that investigation will still be unclear. If the FBI wants any credibility with the American people, they need to get their act together quickly. Right now their actions would be more appropriate in a banana republic than in an America that has a Constitution.

The Gateway Pundit posted an article today about the hearings on possible Russian interference in the 2016 election.

President Trump posted video following the intelligence hearing pointing out there was no evidence of collusion with Russia.

“The real issue is the unbelievable amount of classified information that has been illegally leaked, putting our national security at risk – must get to the bottom of it!”

President Trump represents the idea of shrinking government and going back to the form of government originally envisioned by our Founding Fathers–a weak federal government and strong state governments. That idea is a serious threat to the entrenched bureaucracy and the globalists who want to undermine American sovereignty. Unfortunately, there are a lot of people working in Washington who are feeling very threatened by President Trump’s policies because they have gotten fat and happy as members of the Washington establishment. These are the people behind the leaks, behind the fake news, and doing everything they can to block what President Trump is trying to do. Remember as you read all the stories that say the wiretapping claims are false that The New York Times posted a story on January 20th saying that there were wiretaps. As far as I know, that story has never been recanted. The claim of Russian involvement in our elections is simply a shiny object to distract us from the excessive leaking which is going on and the attempts by the Washington establishment to undermine President Trump. If the media and Democrats are successful in taking down President Trump, I can guarantee that we will lose the protections on our citizens found in the U.S. Constitution. Be alert, and don’t fall for the spin.

John Hinderaker at Power Line posted an article today about the current discussion about wire taps at Trump Tower.

There are two major points in the article:

2. Every time the AP mentions FISAgate, it includes this ritual defense of the Obama administration:

Trump has offered no evidence or details to support his claim, and Obama’s spokesman has denied it.

The AP’s statement is false. It is a classic instance of fake news. Barack Obama’s spokesman has not denied that “the Obama administration wiretapped Trump Tower last year.” He only denied that Barack Obama personally ordered such surveillance. But that isn’t the question. Presumably, the order to conduct surveillance came from Loretta Lynch’s Department of Justice. But no one thinks that Lynch would have ordered the opposing presidential candidate’s telephones tapped, or his computers hacked, without her boss’s approval.

Zero Hedge posted an article yesterday that also sheds some light on the issue.

The best example of this came from Ben Rhodes, a former senior adviser to President Obama in his role as deputy National Security Advisor, who slammed Trump’s accusation, insisting that “No President can order a wiretap. Those restrictions were put in place to protect citizens from people like you.” He also said “only a liar” could make the case, as Trump suggested, that Obama wire tapped Trump Tower ahead of the election.

It would appear, however, that Rhodes is wrong, especially as pertains to matters of Foreign Intelligence Surveillance, and its associated FISA court, under which the alleged wiretap of Donald Trump would have been granted, as it pertained specifically to Trump’s alleged illicit interactions with Russian entities.

…But what is perhaps most important, is that we may know soon enough. As the NYT reported on Saturday afternoon, a senior White House official said that Donald F. McGahn II, the president’s chief counsel, was working on Saturday to secure access to what the official described as a document issued by the Foreign Intelligence Surveillance Court authorizing surveillance of Mr. Trump and his associates.

If and when such a document is made public – assuming it exists of course – it would be Trump, once again, that gets the last laugh.

Stay tuned. This is going to be an interesting story. However, it is becoming obvious that we cannot trust the mainstream media to report it honestly.

These pictures from the Free Republic about the protests:

These are the buses from the Austin protest–the protestors were brought in on busses!

This is an ad for a reporter to cover the New York protests: 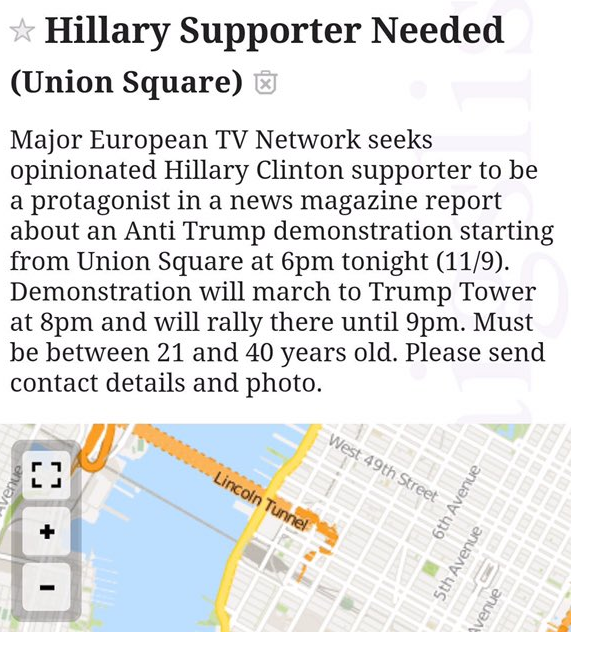 We are being played by the media. Enough Americans have become aware of this to give Donald Trump the victory. Let’s do what we can so that everyone knows our media has lost its way.

Yesterday Breitbart posted an article about the various anti-Trump demonstrations around America. The article points out that that demonstrations have been sponsored by MoveOn.org.

The gatherings – organized by MoveOn.org and allies – will affirm a continued rejection of Donald Trump’s bigotry, xenophobia, Islamophobia, and misogyny and demonstrate our resolve to fight together for the America we still believe is possible.

Within two hours of the call-to-action, MoveOn members had created more than 200 gatherings nationwide, with the number continuing to grow on Wednesday afternoon.

WHAT: Hundreds of peaceful gatherings of solidarity, resistance, and resolve nationwide

WHEN / WHERE: Find local gatherings here. Major gatherings include in New York City’s Columbus Circle and outside the White House in Washington, DC.

Protestors are burning flags and rioting. That is not the way Americans act after an election. It’s time to back up and look at who is funding this and why they are supporting something that is so divisive. Do they have anything better to offer or is this simply the new outlet for the anarchists? 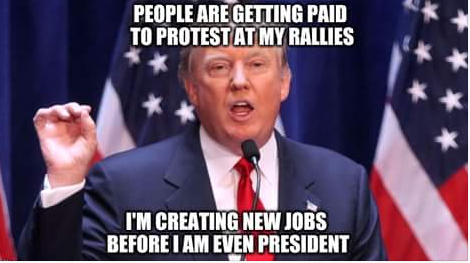