Yesterday The Conservative Treehouse posted an article about Carter Page’s civil lawsuit against those who illegally obtained a FISA (Foreign Intelligence Surveillance Act) Warrant and spied on him.

Today the civil lawsuit Carter Page -vs- James Comey, former FBI Director at the time when Page was targeted, was assigned to a new judge….. and who do you think the judge “randomly selected” was? 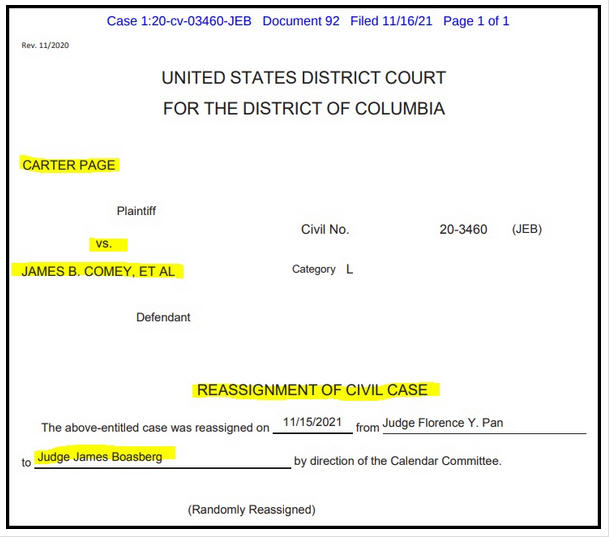 Wow. What an incredible coincidence.

Judge James Boasberg is up to his neck in this.

OK, bear with me and remember, this “random assignment” is a civil case against James Comey.

Not only was Judge James Boasberg the judge that signed off on the third extension of the search warrant that contained the fraudulent Steele dossier as its primary evidence to support it…..  James Boasberg was also the “randomly selected” presiding judge in the criminal case against Kevin Clinesmith, the FBI lawyer who doctored emails to deny that Carter Page was a CIA asset in order to justify the warrant.

Judge James Boasberg was also the presiding judge in the media lawsuit seeking the James Comey memos the FBI and DOJ refused to release.  It was Judge Boasberg who ruled the DOJ could keep the Comey memos hidden from the public (link) to protect the integrity of the Robert Mueller special counsel investigation.  Robert Mueller was also put in place to cover up the illegal political surveillance (ie. “Spygate”) that was also the primary purpose of the fraudulent search warrant.

But wait, it gets worse… Robert Mueller filed the final renewal of the fraudulent warrant (June 29, 2017), and it was Judge James Boasberg signed it.

Let’s be really clear here. The FISA court is a small unit. The judges in/around Washington DC are also a small unit. They know everything that is going on in and around their DC network. A FISA judge inside that DC system knows every granular detail of everything that comes into their purview. All of it. Judge Boasberg even wrote the last two FISA court opinions (2019 and 2020) about the FBI abuses of the FISA-702 process and warrantless, illegal violations of the NSA database.

Now we are to believe it is just another random coincidence that James Boasberg is selected to be the judge in the civil case between Carter Page and James Comey?

Don’t bet on a fair decision in this case. This is the stuff of banana republics. I don’t know if we will be able to put the blindfold back on lady justice.

Yesterday The Conservative Treehouse posted an article about unlawful surveillance of Tucker Carlson, a Fox News show host. The title of the article is, “Fox News Host Tucker Carlson Reveals NSA Conducting Surveillance on His Electronic Communication, Texts and Emails.”

As disturbing as this statement is, considering the prior admissions of warrantless wiretapping by the FBI using the NSA database, this does not come as a surprise.

Tonight on Tucker Carlson the Fox News Host outlined how an NSA whistleblower contacted him and told him the NSA was conducting electronic surveillance of his communication.  To verify the authenticity of the claim the whistleblower told Carlson what the content of his private text messages and emails contained.  While alarming in part, again this should not be surprising.

The article includes the following video:

The right of the people to be secure in their persons, houses, papers, and effects, against unreasonable searches and seizures, shall not be violated, and no Warrants shall issue, but upon probable cause, supported by Oath or affirmation, and particularly describing the place to be searched, and the persons or things to be seized.

Who is protecting the rights of Americans?