Frankly all the United Nations has done for years is make bad decisions, snarl traffic in lower Manhattan, and provide an excuse for diplomats to avoid paying their tickets for double parking. Well, they are getting worse.

Townhall posted an article today about another bad decision by the United Nations.

As Americans prepared to celebrate our nation’s founding and the God-given rights that are protected by the US Constitution, China’s illegal and outrageous crackdown in Hong Kong officially escalated last week. As expected, the rubber-stamp communist “legislature” in Beijing passed a “security” law that effectively cripples the ‘one country, two systems’ arrangement to which China is bound by treaty until at least 2047. Pro-freedom activists have been rounded up and arrested, with concerns swirling that at least some show trials will take place on the Chinese mainland. What the regime is doing is patently illegal under international law. It is an abuse of human rights and a brazen affront to human liberty. And yet, the hopelessly corrupt “Human Rights” Council at the United Nations voted to bestow its blessing on the Communist government’s anti-freedom power grab. They didn’t stay neutral, mind you. They explicitly endorsed the abuse:

…Among the HRC member nations giving China the thumbs-up are Cuba, Iran, North Korea, “Palestine,” Syria, Yemen, and Zimbabwe. Yes, each of those counties is represented on the UN’s human rights body. Why isn’t the United States colored gold on the map above, given the government’s harsh public condemnations of these abuses? Because, quite rightly, the Trump administration pulled the US out of this farcical commission two years ago. I’ll remind you that the UN’s committee on women’s rights added…Iran last year. It’s all so ludicrous. When the HRC isn’t busy doing Communist China’s bidding, it spends much of its time condemning Israel for sport. And this disgusting Beijing lackeyism on the Hong Kong matter doesn’t come in a vacuum; it arrives in the context of ongoing and egregious human rights violations elsewhere in China:

Please follow the link above to read the rest of the story.

Even if you accept the premise that the United Nations was founded with good intentions and not as a future vehicle for one-world government, they have obviously lost their way.

Just for the record, the preamble to the United Nations Charter includes the following:

WE THE PEOPLES OF THE UNITED NATIONS DETERMINED

Their ruling on Hong Kong is in violation of a treaty and of international law. It is time for the United Nations to go away.

Hot Air posted an article yesterday about what is currently happening in Hong Kong.

When we were discussing China’s new “national security” law for Hong Kong yesterday, it was noted that pro-democracy advocates were already railing against the betrayal of the promises China made when taking over control of the city from Great Britain. Protests were planned, but pro-Beijing lawmakers were warning that any sort of public demonstrations could be dealt with harshly. Well, that took all of one day to come to pass. Despite concerns about a new wave of coronavirus infections, demonstrators took to the streets and were quickly met by police forces firing tear gas canisters indiscriminately into the crowds at a large shopping center. And then the arrests began.

…Tam Tak-chi, one of the city’s most well-known democracy advocates, was arrested shortly after the protests began. He had previously predicted that he would be detained if China moved forward with its new legislation and it turned out to be a self-fulfilling prophesy. He was charged with holding “an unauthorized assembly.”

In that sense, much of the “freedom” enjoyed by Hong Kong since 1997 has largely been illusory anyway. China regularly intervenes in local elections if the residents begin electing too many people with crazy ideas about freedom and democracy. The top leadership positions, currently exemplified by Carrie Lam, are always held by pro-Beijing politicians who take their marching orders from the CCP. People have regularly been arrested in Hong Kong for demonstrating, giving speeches or contacting foreign media outlets, things that people in free nations simply take for granted.

Up until now, a certain amount of demonstrating and chatter about democracy has been allowed, apparently just to humor the locals. But now it appears that China isn’t going to even bother providing a fig leaf to the 1997 agreement they entered into. They’re probably sure that they can get away with it because nobody is going to risk going to war with them or attempt any sort of direct military intervention right on China’s doorstep to free Hong Kong’s citizens. And while it’s sad to say, they’re probably right.

This was predictable. I don’t know if the outcome would have been any different had the British not signed the treaty with China. However, we need to learn from what we are watching–China is not a reliable partner in any treaty. On May 5th, I posted an article citing a provision in the recent trade agreement (signed before the coronavirus outbreak in America) that says if there is a natural occurring disaster, the two parties will renegotiate. This is another example of the fact that China, under communism, is not willing to play fair on the international stage. Best wishes to the people of Hong Kong. I am not optimistic about your future.

My goodness. It was passed when Joe Biden was a member of the U.S. Senate and then signed by then-President Bill Clinton.

A comprehensive treaty agreement that allows cooperation between both the United States and Ukraine in the investigation and prosecution of crimes.

It appears President Trump was following the law to the letter when it comes to unearthing the long-standing corruption that has swirled in Ukraine and allegedly involves powerful Democrats like Joe Biden and others. 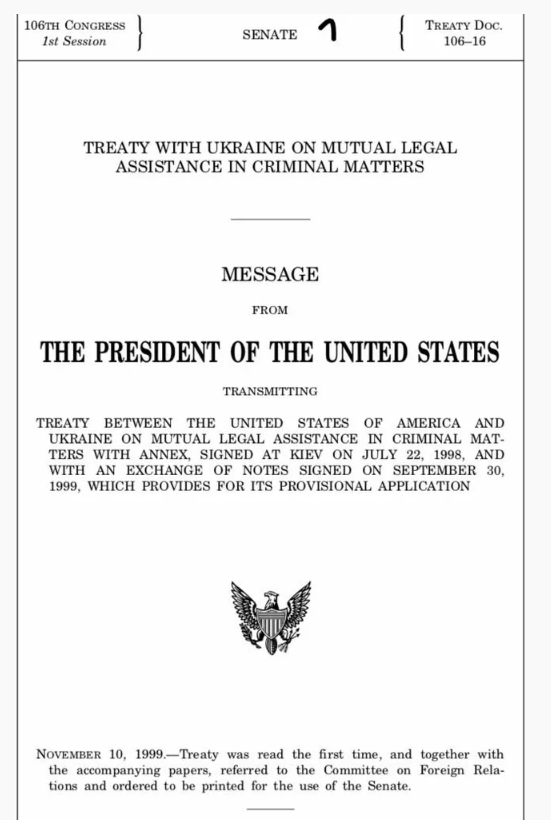 “To the Senate of the United States: With a view to receiving the advice and consent of the Senate to ratification, I transmit herewith the Treaty Between the United States of America and Ukraine on Mutual Legal Assistance in Criminal Matters with Annex, signed at Kiev on July 22, 1998. I transmit also, for the information of the Senate, an exchange of notes which was signed on September 30, 1999, which provides for its provisional application, as well as the report of the Department of State with respect to the Treaty. The Treaty is one of a series of modern mutual legal assistance treaties being negotiated by the United States in order to counter criminal activities more effectively. The Treaty should be an effective tool to assist in the prosecution of a wide variety of crimes, including drug trafficking offenses. The Treaty is self-executing. It provides for a broad range of cooperation in criminal matters. Mutual assistance available under the Treaty includes: taking of testimony or statements of persons; providing documents, records, and articles of evidence; serving documents; locating or identifying persons; transferring persons in custody for testimony or other purposes; executing requests for searches and seizures; assisting in proceedings related to restraint, confiscation, forfeiture of assets, restitution, and collection of fines; and any other form of assistance not prohibited by the laws of the requested state. I recommend that the Senate give early and favorable consideration to the Treaty and give its advice and consent to ratification.”

President Trump’s phone call was in accordance with this treaty. Joe Biden’s threat to withhold money if a prosecutor was not fired was not. Why are we investigating the wrong person?