Yesterday Real Clear Politics posted an article alerting its readers to the indoctrination in the coming television season. Entertainment  is going political.

Last week, the Biden administration promised gun control groups that it will soon roll out a massive push for limits on firearm purchases and other measures. President Biden reiterated that promise on Sunday. And the television networks aren’t waiting to lay the groundwork for this effort.

CBS is in a full-court press for gun control on its evening entertainment television shows. The bad guys are always white supremacists who use machine guns — supposedly AR-15s — to commit mass public shootings. Criminals in Mexico supposedly get machine guns from the United States. A father’s desire to protect his family only leads to tragedy when his daughter gets into the gun safe and uses the weapon in a mass public shooting. And guns in the home pose a danger for children. Gun registration is necessary for solving crime.

Does anyone actually believe that criminals will register their guns?

NBC isn’t to be left out, showing a woman who tried but failed to use a gun to protect herself. Instead, her gun was taken from her and used to kill a police officer. The lesson is that owning a gun will only bring you grief.

And that’s just in the first six weeks of the year. Every show gives an inaccurate impression about firearms, thereby helping in this push for gun restrictions.

…“Magnum PI” has an episode where a 12-year-old steals his father’s gun from a bedside table and accidentally shoots his 10-year-old brother. The message is that parents should be afraid of having guns in the home. But, in 2019, there were 37 accidental gun deaths among children under 11 years of age in the entire country. Most of those deaths involve shots fired by adult males, typically in their mid- to late-20s, who also have criminal records and are very likely to be drug addicts or alcoholics. With 43.8 million children under 11, the probability of a young child getting ahold of a gun and accidentally shooting another child is incredibly small.

The lessons from these entertainment shows are clear. Don’t try to use a gun for protection, and it’s better to not even think of owning one. Also, the biggest danger in present-day America is white racists with machine guns. Gun control advocates know Americans won’t accept more gun control if given accurate information. It is bad enough that news programs provide only one side of this debate. But when Americans just want to be entertained, they still can’t escape lies about gun ownership.

A friend once remarked to me that everything you see on television is there for a reason. At the time I thought he was paranoid. Now I think he may have been right.

I know that my cable company has channels that I won’t watch. I understand that movies I think should be rated “R” are often rated “PG-13.” I understand that basically I don’t think nudity or sex belongs on my television or my computer. I think that makes me something of a dinosaur. However, it was not quite as bad when it was somewhere in the triple-digit channels that I don’t even flip through. Now it is coming to a FOX station in the regular line-up.

Beginning Saturday, the FOX network will air a number of animated shows that contain sexually explicit and profanity-laced content never before shown on network television during its “Animation Domination High-Def” (ADHD) programming block.

The article reports that originally the explicit material will be shown at 10 o’clock at night when ideally children will not be watching it. There are two problems with that idea–the shows could be DVR‘d by anyone over the age of five, and the network is breaking ground with the intention of moving the shows into prime time after they have been on for a while.
This is not good for our children and it is not good for our society. Television already teaches children bad manners and inappropriate ways to treat people, why do we have to add bad language and sex?

In an interview with CNSNews, Dan Isett, director of public policy for the Parents Television Council (PTC), said that the programming contained some “adult-oriented material, certainly raunchy and inappropriate for an awful lot of audiences and frankly beyond the pale. It’s not really material that we’ve really seen produced by a mainstream media company before.”

If you care about your children, you need to care about what they are exposed to on television. None of this is conducive to building future citizens of a healthy society. The only way these shows will go away is if no one watches them.

Money talks. I hate to be cynical, but money talks. Breitbart.com reported yesterday that the production tax incentives favorable to the domestic entertainment industry enacted by Congress in 2004, extended in 2008 and scheduled to expire in 2011, have been extended through 2013. The bill passed to avoid the fiscal cliff increases taxes on 77 percent of Americans, but Hollywood gets a tax break.

Hollywood players routinely beg the government to raise their taxes so they can pay their “fair share.”

Yet the industry moves new productions to places where existing tax breaks help its bottom line. That means plenty of shows and films are shot in states like New Mexico, which feature highly favorable tax rates, as well as destinations north of the border with similar perks.

It really is time to find some honest legislators to redo the tax code. I believe that there are a few men of principle in our government; unfortunately there are too few of them to accomplish what needs to be done.

BuzzFeed posted a chart yesterday showing the relationship between your favorite television shows and the way you vote: 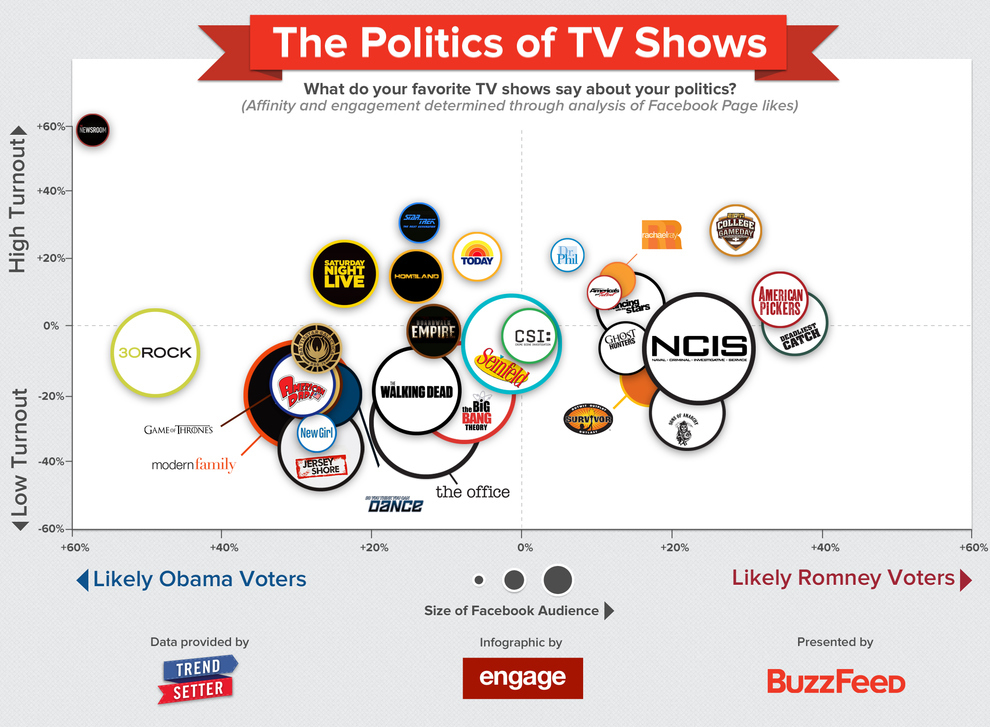 Follow the link above to see the full-size chart!

TMZ.com is reporting that Andy Griffith has died at the age of 86.

Griffith, who became famous for “The Andy Griffith Show,” passed away at his home in Manteo, North Carolina this morning.

He was part of an era of television that has never been duplicated. His movie career included the movie “No Time For Sergeants” which is still as funny today as it was made in 1958.

Andy Griffith will be missed.