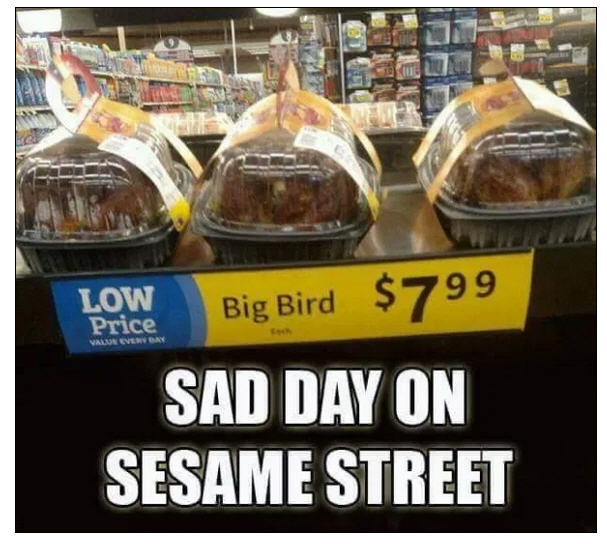 Entertainment Weekly reported yesterday that Sesame Street is going to introduce a character to acquaint young children with the concept of poverty and hunger. Good grief. Can’t we let them be children for a few years?

The special will share the stories of real-life families to raise awareness of hunger issues in the United States, as well as strategies that have helped these families find food. The United States Department of Agriculture estimates that 17 million American children — nearly 1 in 4 — have limited or uncertain access to affordable and nutritious food. Walmart is sponsoring the show as part of a $1.5 million grant toward the initiative and holding screenings in select communities.

The concept of food insecurity is going to be spotlighted in this one-hour Sesame Street primetime special, Growing Hope Against Hunger. I am not unsympathetic to the problem of hunger in this country, although I wonder why it exists. We spend billions on food stamps to deal with the problem, where does the money go? I do have a problem with the idea of throwing this information at young children. Children do not have the same understanding as grown-ups as to the challenges of adulthood. To me, this is exposing young children to something that will make them fearful–I can’t imagine it having any other effect. Compassion is something children learn as they grow up. Showing images and stories of children who are hungry does not engender compassion–it just causes children to worry if this will happen to them. They are children.!!!