On Sunday, The Gateway Pundit reported the following:

…Lara Logan: You look around you and you know they don’t actually believe in citizenship. And now when people come across the border illegally, I have this confirmed from border patrol agents who are actually, physically doing this, they get given a Social Security number. They get assigned a Social Security number when they cross. I’m not sure how many of you are aware of that. And if you really want to know where the cheating starts, it’s long before you get to the polls. Think about it, it starts with the census. It starts with counting illegals in the census.

As states like New York and California are losing population, counting non-citizens in the census can make up for that loss. We know that the Biden administration is secretly flying illegal immigrants from the border to an airport north of New York City. Are they planning for those immigrants to become Democrat voters or to be counted in the next census?

CNS News posted an article on Friday about identity theft in America.

The Internal Revenue Service in 2011 through 2016 documented more than 1.3 million cases of identity theft perpetrated by illegal aliens whom the IRS had given Individual Taxpayer Identification Numbers (ITIN), which are only given to people who are ineligible to work in the United States or receive Social Security Numbers, according to information published by the Treasury Inspector General for Tax Administration (TIGTA).

However, in response to inquiries from CNSNews.com, the IRS could not say if it had referred even one of these cases for criminal prosecution.

Imagine how you would feel if you were one of the people whose identity had been stolen–would you want the person prosecuted?

The article reminds us that using a fake or stolen Social Security is a felony.

The article includes a picture of the types of identity theft involved: 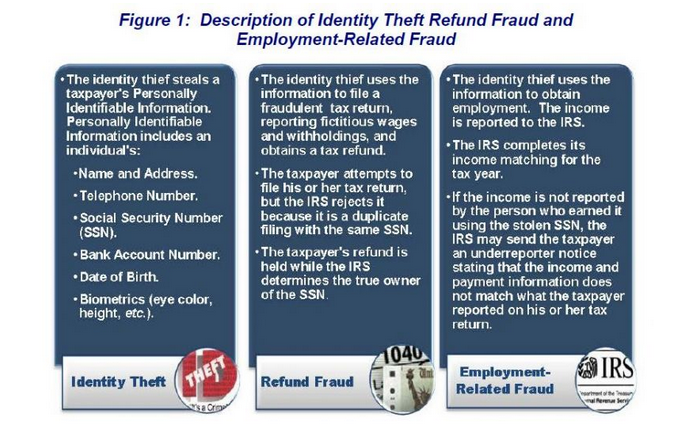 A January 2004 TIGTA report said: “The IRS Office of Chief Counsel determined that, ‘the group of persons with United States federal tax obligations who are not eligible to obtain an SSN is limited to non-citizens who either do not reside in the United States or reside here illegally.”

In 1999, TIGTA released a report warning that with its ITIN program the IRS had embraced a policy to “‘legalize’ illegal aliens” that “increases the potential for fraud.”

In a follow-up report in 2004, TIGTA concluded that ITIN holders who filed tax returns using a Social Security Number were in fact illegal aliens.

“Our conclusion is that, generally, the individuals who file a United States (U.S.) Individual Income Tax Return (Form 1040) with an ITIN as the identification number and receive wages that are identified with a Social Security Number (SSN) on the attached Wage and Tax Statements (Form W-2) are unauthorized resident aliens,” said TIGTA.

Then-Deputy IRS Commissioner Mark Matthews responded to this TIGTA report by conceding that ITIN holders who filed tax returns reporting wages earned in the United States were likely to be illegal aliens and that if they used a SSN it was “stolen or fabricated.”

“The Service has concluded that most resident aliens who hold ITINs and who report and pay tax from wage income are not legally employed in the United States,” he told TIGTA in a memo. “This is because such a taxpayer would have a valid SSN if the holder were legally employed in the United States, making procurement of an ITIN unnecessary and duplicative.”

The article explains the process for dealing with identity theft:

When it notifies victims of employment identity theft, the IRS does not tell the victim the name of the person who stole their identity. The notification form it used in its pilot program told the victim: “Federal law prevents us from providing specific details regarding the identity of the individual who used your SSN for employment purposes.”

However, the IRS can refer identity theft cases to the Justice Department for criminal prosecution.

The IRS’s Criminal Investigation division publishes an annual report stating how many “prosecution recommendations” it makes each fiscal year and the crimes for which it makes them. In the six fiscal years from 2011 through 2016, according to these reports, IRS CI made 20,986 prosecution recommendations and 4,329 of them were for identity theft cases.

If everyone one of these identity theft prosecution recommendations had been for a case of employment identity theft—rather than refund-fraud identity theft—that would have equaled 0.3 percent of the 1,346,485 ITIN-holder cases the IRS documented in those years.

It seems to me that we should prosecute these cases and send those committing the crimes back to their home countries. It sounds as if our government is not at all interested in protecting Americans from identity theft.

Yesterday The Washington Times reported that the Internal Revenue Service was extremely generous with taxpayer money–paying millions of dollars in refunds to people who were not legally entitled to them.

The IRS doled out more than $24 billion in potentially bogus refunds claimed under several controversial tax credits in 2016, according to a new audit that said $118 million was even paid to people who weren’t authorized to work in the U.S. in the first place.

The totals and error rates for the earned income and child credits were comparable for 2015, while the education tax credit saw improvement.

The article explains that Congress passed a law in 2015 that was supposed to curb payments to people who were not entitled to them.

Both the inspector general and the tax agency said that steps have already been taken to try to prevent a repeat in the future, saying that a law passed in late 2015 should help.

Treasury Inspector General for Tax Administration J. Russell George said the IRS needs to follow through on the 2015 law, which imposes more restrictions on certain filers and delays refunds for people claiming the credits to give agents more time to flag suspicious returns.

One particular problem the IRS faces is checking people who have Social Security numbers but who aren’t authorized to work in the U.S.

This is one place that the federal budget could be easily cut. Tax refunds should only go to the people entitled to receive them.