Night two of the Republican National Convention was good television. It moved quickly and changed the subject often enough to keep the audience interested. Some of it was very touching. Therefore it is no surprise that the mainstream media and the political left (actually they are the same people) are very upset. They are looking for any way to counter the message that is getting out–that America is good and America is open to anyone who wants to come here legally and succeed.

Breitbart posted an article about some of the reaction yesterday. I sense desperation.

Former Obama administration official Wendy Sherman tweeted that the ceremony was a “horror”:

These are two of the tweets: 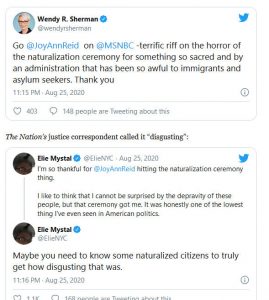 I can honestly say that I do not understand their gripe. The people involved told their stories and took their oath. New legal citizens should be something celebrated by all Americans under any circumstances.

The article continues and concludes:

However, Washington Post columnist Karen Tumulty — a critic of Trump — wrote that Trump would not be the first president to partake in political activities in the White House, citing former Presidents Jimmy Carter and President Ronald Reagan. She wrote:

With the Republican convention all but canceled because of the covid-19 pandemic, President Trump has been toying with the idea of formally accepting his party’s nomination from the White House — a prospect that has brought howls of outrage from Democrats.

But while Trump has shown little respect for norms, he would not be the first president to use the White House — or even the Oval Office — as the backdrop for a signature campaign event.
In December 1979, Jimmy Carter deemed that a more lavish announcement would not be appropriate amid a crisis in which 50 Americans were being held hostage in Tehran — so he declared that he was running for reelection in a somber nine-minute ceremony in the East Room. ‘As president and as a candidate, I will continue to ask you to join me in looking squarely at the truth,’ he said. ‘Only by facing up to the world as it is can we lift ourselves towards a better future.’

Carter’s campaign even made ads from the Oval Office. In the fall of 1980, during an intense race against former California governor Ronald Reagan, Carter’s campaign broadcast a four-minute spot that showed him in a darkened presidential office. A beam of overhead light angled onto Carter’s face as he warned about the dangers of nuclear war. “In this office, I’ve worked in the arms-control tradition of seven presidents, Democrat and Republican,” he said. “Before you vote, please look carefully into this deep chasm that divides Governor Reagan and myself on this issue.”

Tumulty also wrote that Reagan also used the Oval Office as a backdrop for his reelection announcement on January 29, 1984.

“So would it be all that much of a break with precedent for Trump to accept his party’s nomination somewhere on the White House grounds? I, for one, think the White House makes more sense than anywhere else and would nod to the fact that caution should be keeping everyone at home during the covid-19 pandemic,” she added.

I know this is the silly season in politics, but sometimes the pettiness amazes me.

Jim Acosta has been very vocal during the President’s briefings on the coronavirus. At one point when President Trump stated that he thought that voting by mail is an invitation to fraud, Jim Acosta demanded evidence. Well, the President obliged.

Breitbart posted an article yesterday with some examples.

Trump replied, “I think there’s a lot of evidence, but we’ll provide you with some, okay?”

The president’s re-election campaign responded quickly to Acosta’s request, noting there were nine people charged in the Rio Grande Valley in Texas with “vote harvesting” and mail ballots, a political operative in New York stealing and submitting absentee ballots, and a resident in Pennsylvania receiving seven separate ballots in the mail.

The campaign also shared a Heritage Foundation document of over 1,000 proven cases of vote fraud.

“Democrats and the mainstream media always scoff at claims of voter fraud, but then completely ignore evidence from across the country,” Trump 2020 campaign manager Brad Parscale said in a statement. “The obvious reason is that Democrats are just fine with the possibility of voter fraud. And many in the media just see the world their way.”

The Trump campaign also quoted an election expert in the New York Times who said although election fraud was rare, “the most common type of such fraud in the United States involves absentee ballots” through the mail.

“Outside those in the establishment media who are more interested in attacking the President than the facts, there’s a clear consensus that universal mail-in voting would be vulnerable to fraud,” a White House source told Breitbart News in a statement.

Every fraudulent vote cancels the vote of an American citizen who has the right to vote. The examples above are only one of many reasons why instead of voting by mail, we need voter id laws that require photo identification to vote. That will not entirely solve the voter fraud problem, but it will go a long way in that direction.

On Tuesday The Daily Telegraph posted a story about some events in the White House during the Clinton presidency.

For several months during Bill Clinton’s administration, a former top military officer says the White House lost the card with a set of numbers for opening the briefcase containing the codes for a nuclear attack.

Gen Hugh Shelton, who was Chairman of the Joint Chiefs of Staff at the time, said in his new memoir, “Without Hesitation: The Odyssey of an American Warrior” that “the codes were actually missing for months. That’s a big deal – a gargantuan deal.”

…A similar claim was made by Lt Col Robert Patterson, a former aide, in a book published seven years ago. He was one of the men who carried the briefcase, known as the “football”, and he said that the morning after the Monica Lewinsky scandal broke that he made a routine request of the president to present the card so that he could provide an updated version.

“We called upstairs, we started a search around the White House for the codes, and he finally confessed that he in fact misplaced them. He couldn’t recall when he had last seen them.”

Former president Jimmy Carter was rumoured to have once left the “biscuit” in a suit that was sent to the dry cleaners.

Please follow the link above to the article–there are some very interesting quotes at the end. Meanwhile, it seems as if the people concerned about Donald Trump having the nuclear codes might want to check the skeletons in their own closets. 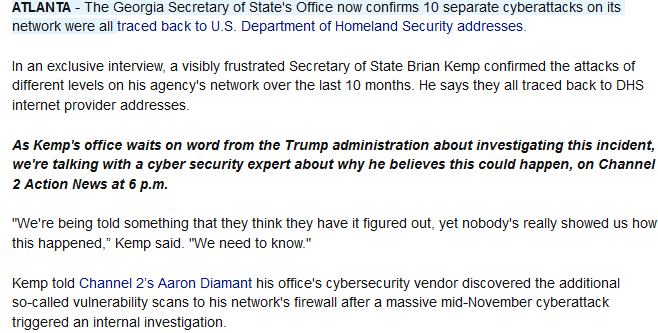