Today Fox News reported that Paul Manafort was transferred to a federal prison in New York City late Monday ahead of his pending state court trial — but only after the Justice Department rejected a local district attorney’s widely criticized bid to move him to the notorious Rikers Island prison complex. There was never any reason to put him in Rikers Island other than to further mistreat him.

Manafort was instead transferred to the New York Metropolitan Correctional Center (MCC), a federal detention facility located in Manhattan.

MCC houses many inmates awaiting trial or sentencing. Among the current inmates are terror suspect Sayfullo Saipov, who allegedly ran down pedestrians with a truck in New York on Oct. 31, 2017, and Cesar Sayoc, the man who allegedly sent package bombs to prominent Democrats. Joaquin Guzman, the notorious drug lord known as “El Chapo,” is reportedly being held at the facility.

A senior Justice Department official told Fox News that Manafort’s attorneys contacted the Bureau of Prisons and “raised concerns about his transfer to state custody related to his health and personal safety.”

It is nice to see that someone in the Justice Department prevented the further miscarriage of justice regarding Mr. Manafort.

I spent 22 ½ years in the Marine Corps. I have operated in around 30 countries, sat off shore of many more. Waiting for an order that often never came. When waiting off shore for an operation, or moving to a new Area of Operations, or even over time and different tours in Iraq, we would be given a Rules of Engagement brief (ROE) by a Lawyer from the Judge Advocate General’s office (JAG). This would spell out legally when we could and could not engage hostiles, or perceived hostiles. However, ever Marine Corps ROE brief ended the same way and on the same note. On the typed copy is was in bold, usually underlined print, often all capital letters, but always said the same thing, “THE RIGHT TO SELF DEFENSE IS NEVER DENIED!”

A week ago a landmark court decision in Florida decided on December 12th, vindicates all arguments for the right to self defense and your right to bear arms. This court decision by a Federal Judge sets or affirms legal precedence that the Police have no constitutional duty to protect individuals from harm, even when they know harm will occur and that harm will most likely result in death. This legal precedence is not just for the state of Florida where the case was tried. This is a Federal court and has establish or affirmed legal precedence in all 50 states and US territories.

What does this mean for Joe Citizen? If this case is not overturned on appeal. It firmly establishes that the individual and only the individual is responsible for his or her safety. With this one court decision, that is likely if not surely to be upheld by higher courts up through the Supreme Court, the individual is firmly within his or her Constitutional right to defend themselves, and as stated in the 2nd Amendment of the United States Constitution, the right to bear arms shall not be infringed. This ruling gives substantial legal weight to the argument for Constitutional carry and the individuals inalienable right to save and preserve one’s own life.

What does this mean to gun control lobbyist, groups, and politicians? This ruling in Federal court obliterates all barriers imposed by “May Issue” concealed carry states and cities. States and cities will still have wiggle room to impose some sort of firearms safety course in the same legal spirit as a driver’s license, however legal bars outside criminal records, drug abuse, or mental health will loose all just standing under the law unless it is shot down on appeal. Moms Demand Action for Gun Sense in America, Senator Feinstein, Michael Bloomberg’s arguments that individuals do not need firearms for self defense and that the police are responsible for public safety just had the rug yanked completely out from under them. Their argument was always on tentative ground at best, since when seconds count, the police are minutes away. The Department of Justice determined that the average police response time to a 911 call is over 4 minutes, the average interaction time between a criminal and his victim is 90 seconds. This is a not a dig at police officers, as a retired Marine who is currently employed as a tactical firearms and martial arts instructor, I am a staunch supporter of law enforcement, and many of my friends and coworkers are law enforcement or retired law enforcement. This is simply a matter of time, space, and logistics. Now, it is firmly established that even if the police respond to, or are in observance of a crime, they are not required to intervene, they can even refuse to intervene, and not be held accountable to the department, city, county, state, federal government, or even the Constitution of the United States.

Just as Smokey the Bear says, “only you can prevent forest fire,” you, and only you, are 100% responsible for your safety, only you are responsible to save your life. The 2nd Amendment was just reaffirmed as your legal means to do so.

Thank you, Sparky. Below are my comments.

There are actually two decisions reported in The New York Times on December 18th:

The school district and sheriff’s office in the Florida county that is home to Marjory Stoneman Douglas High School had no constitutional duty to protect the students there during the deadly February massacre, a federal judge has said in a ruling.

The decision was made in a lawsuit filed by 15 students who said they suffered trauma during the Feb. 14 attack in Parkland, Fla. A total of 17 students and staff members lost their lives; 17 others were injured.

Prosecutors are seeking the death penalty for Nikolas Cruz, 20, the former Stoneman Douglas student who is accused of opening fire at the school on Valentine’s Day. He has pleaded not guilty, but his lawyers have said he would plead guilty in exchange for a life sentence.

The Dec. 12 ruling, by Judge Beth Bloom, came on the same day that a county judge, Patti Englander Henning, came to the opposite conclusion. Judge Henning found that Scot Peterson, the armed sheriff’s deputy who heard the gunfire but did not run in and try to stop the attack, did have an obligation to confront Mr. Cruz.

“Neither the Constitution, nor state law, impose a general duty upon police officers or other governmental officials to protect individual persons from harm — even when they know the harm will occur,” said Darren L. Hutchinson, a professor and associate dean at the University of Florida School of Law. “Police can watch someone attack you, refuse to intervene and not violate the Constitution.”

The message is clear–every American has to take responsibility for their own safety. If you are not comfortable with guns and want to feel safe at home, keep a can of wasp spray on your night stand. It won’t kill an intruder, but it might slow him down and give you a chance to escape. There are also other personal safety devices available. The right to bear arms should not be infringed. Our Founding Fathers placed it there so that we could defend ourselves in all situations–from criminals and from government tyranny. Giving up the right to bear arms would result in the end of America as we know it.

Information on what to do in case of a terrorist attack: 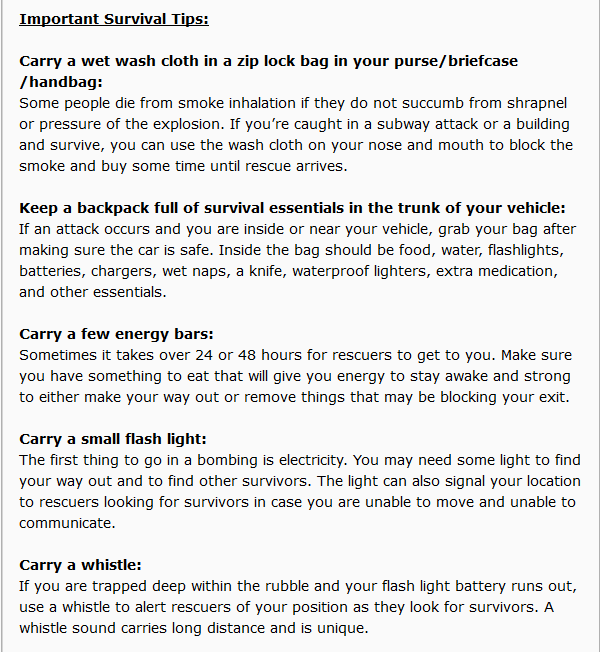 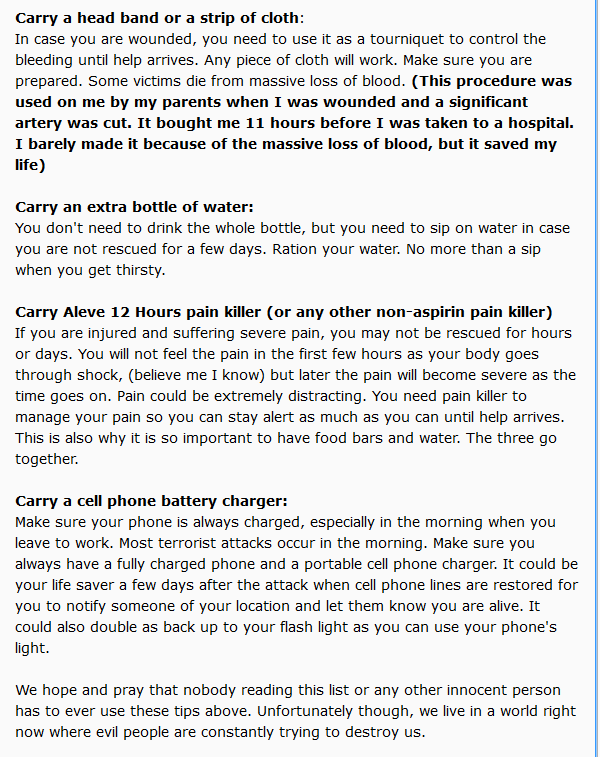 The source of this information is Act for America. The email I received from them also stated:

To stay informed about the radical Islamic threat to our way of life and what you can do as a citizen to protect our country, yourself, and your loved ones, please join us. Go to actforamerica.org and get involved today. Be the change. Make a difference. Help us keep America safe!