Today the Dan Bongino website posted an article about five far-left promises the Biden administration has kept since taking office.

3. Pledge to Get Back into the World Health Organization (W.H.O.)

4. Rejoining the Paris Climate Accord

5. Halting Deportations for Most Illegal Aliens

Please follow the link to the article to read the details given.

I would like to mention the impact of a few of these policies. Revoking the Keystone XL Pipeline moves America away from energy independence. It costs Americans involved in the project their jobs and puts small supporting businesses in the area in jeopardy. Ending migration controls is resulting not only in a crisis at our southern border, but also in the release of people who have the coronavirus into the general population throughout the country. Getting back in the W.H.O. is simply giving taxpayer money to a corrupt organization that is responsible for the deaths of many people worldwide because it bought the Chinese propaganda about the coronavirus. Rejoining the Paris Climate Account will result in Americans losing their jobs and a lower standard of living for everyone. Halting deportations for most illegal aliens puts a drain on the social safety net in cities and towns where the illegals choose to go. Again, that is a drain on American taxpayers.

Yesterday The Blaze posted an article about former Vice-President Joe Biden’s plans for executive orders should he become President.

Former Vice President Joe Biden plans to roll out at least four executive orders should he ultimately be sworn in as president on Jan. 20, undoing the work of President Donald Trump, his campaign said this week.

A spokesperson for the Biden campaign on Monday told Fox News that the former vice president plans to rejoin both the Paris climate agreement and the World Health Organization and also plans to reinstate the Deferred Action for Childhood Arrivals — or DACA — and repeal the president’s so-called travel ban on certain Muslim countries.

Biden has also previously vowed to repeal Trump’s tax cuts and reverse the Mexico City Policy, which bans foreign aid from going to nongovernmental organizations that promote or pay for abortions.

“Other abortion-related policies and those weakening the Affordable Care Act will likely be on the chopping block in a Biden-Harris administration as well,” the outlet noted.

All of these policies will not help America move forward. Repealing the tax cuts will slow economic growth, ending the travel ban will make Americans less safe, and rejoining the Paris climate agreement will cripple the American economy while not impacting economic rival China. Just for the record, America has cut its carbon emissions despite not being part of the agreement; China continues to build coal-generated electric plants, increasing its carbon emissions. It is also unfortunate that the Democrats are so beholden to their Planned Parenthood donors that they find it necessary to use taxpayer dollars to fund abortions overseas.

The 2020 Davos Economic Conference will convene this month. The Conservative Treehouse posted an article yesterday announcing that President Trump has announced the Presidential Delegation that will attend the World Economic Forum in Davos-Klosters, Switzerland, from January 20 to January 24, 2020.

The article notes some interesting aspects of this conference:

As a result of the recent U.K. election, pending Brexit, a favorable $7.5 billion WTO ruling and USTR Lighthizer’s new $2.4 billion EU targeted tariff program, the administration has significant advantages going into a trade discussion with the EU in 2020.

Meanwhile Team EU has: (1) the UK leaving; (2) severe drops in German industrial manufacturing; (3) a shrinking French economy; (4) yellow-vests in the streets; and (5) demands for greater economic autonomy from many key member states.

Overlay Germany, France and Italy large economy challenges such as: their promise to meet NATO obligations – and their attachment to the strangling Paris Climate Treaty, and the EU’s collective economic position is precarious at best.

The Honorable Steven Mnuchin, Secretary of the Treasury, will lead the delegation.

Members of the Presidential Delegation:

The pictures included in the article are an indication of things to come: 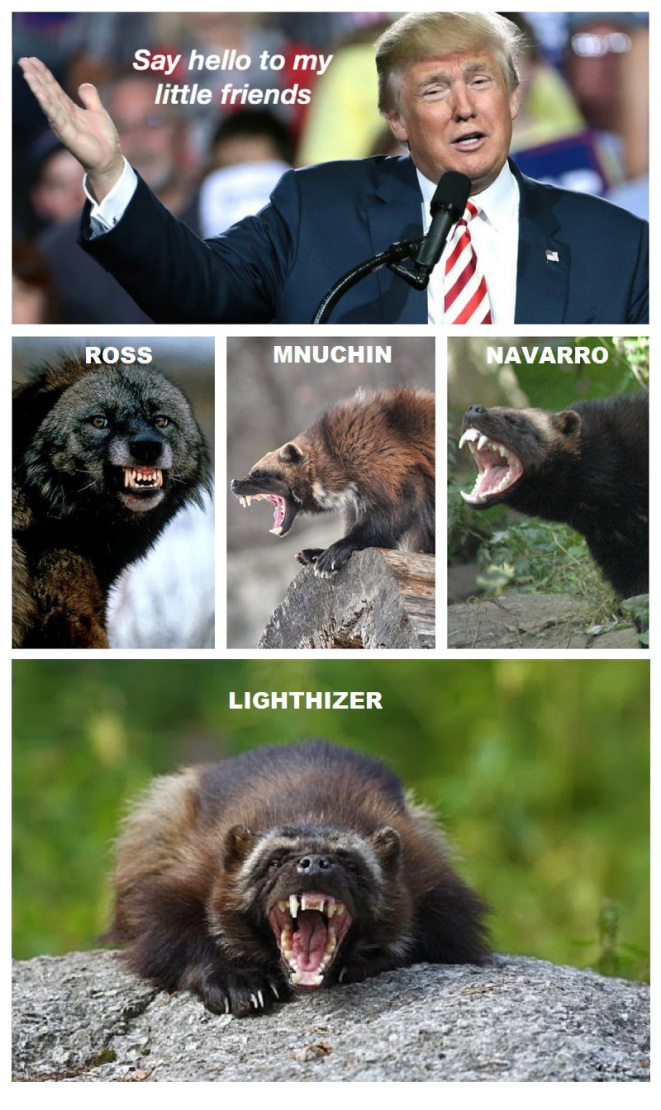 On Tuesday, Townhall posted an article listing the reasons America should not be part of the Paris Climate Treaty. While we are hearing the hysterics from the political left, I would like to remind everyone that the reason the Paris Climate Treaty was called an ‘accord’ in America is that the politicians in Washington did not want to vote for it. Former President Obama knew that as a treaty it could not get through Congress. On some level, all Washington politicians understood the damage the treaty would do to the American economy, and there was always the danger that the voters would hold those politicians who voted for the treaty accountable. So all of the current hysteria is somewhat unconvincing.

The article reports the reasons that being part of the agreement was a really bad idea:

1) Warming over the last 50 years or so has averaged only about half of what computerized climate models can explain. Yet, those models are the basis for the Paris Agreement.

2) It is not obvious that recent warming is entirely the fault of our CO2 emissions. It is very possible that temperatures during the Medieval Warm Period were just as warm as today. Natural climate change exists. If we didn’t cause it, we can’t fix it.

3) Even if future warming increases to match the models, and all nations abide by the Paris commitments, we will avert only 0.3 deg. F warming by the year 2100. That’s less than 0.04 deg. F per decade, which is unmeasurable by current global temperature monitoring networks (satellites, surface thermometers, and weather balloons).

4) The cost of this unmeasurable impact on future global temperatures is variously estimated to be around $1 Trillion per year, primarily spent by the U.S. and a few other countries which drive global prosperity. As usual, the poor will be the hardest hit. That money could have been spent on clean water and providing electricity to the 1+ billion humans who still don’t have electricity.

5) China and India, which are burning coal like there is no tomorrow, don’t really have to do anything under the Agreement until 2030. It’s mainly up to the U.S. to cut our emissions, and send our wealth to poor countries where dictators will continue to enrich themselves.

6) Increasing CO2 levels have benefits, such as increased crop productivity and ‘global greening’. Life on Earth requires CO2, and over the last 60 years we have been monitoring its levels in the atmosphere, Mother Nature has been gobbling up 50% of what we emit to create even more life.

There are also other reasons to reject the treaty.

In February of this year, I posted an article that included the following:

Then listen to the words of former United Nations climate official Ottmar Edenhofer:

It’s not about the climate–it’s about greed. The treaty does not require any action by China, one of the world’s worst polluters, or India, who runs a close second. It allows third world tyrants to gain access to the coffers of the United States. Those coffers, incidentally, will be sparse due to the restrictions placed on the American economy.

One of the major keys to the economic success of a nation is private property rights. I posted an article about this in 2010. The Paris Climate Treaty is an example of countries whose leaders do not allow private property rights attempting to gain prosperity at the expense of countries who are prosperous and allow private property rights. This treaty was a move toward global governance and worldwide communism. In viewing the uproar over President Trump’s actions, we need to remember that the biggest obstacle to the globalists around the world are the financial success of America and the freedom of Americans. This treaty would have undermined both of those.