As much as the political left in America likes to slam Fox News are being entirely right wing, that has never actually been the case. Actually Fox News historically has been one of the more balanced news networks. That was then; this is now. As the control of the network changes, it has lost some of its willingness to report thoroughly on some matters.

The Conservative Treehouse posted an article yesterday about some creative editing done by Fox News.

Ironically the name of Dan Bongino’s show is “unfiltered.”  Alas when President Trump’s spokesperson, Liz Harrington, reviewed the tape she discovered the censorship and showed on Twitter [SEE HERE]  In the transcript below the emboldened section was removed:

President Trump said: …“it’s a disgrace what’s happening, and I don’t think the country is going to stand for it much longer; they’re disgusted.  You have a fake election; you have an election with voter abuse and voter fraud, like nobody has ever seen before. And based on that, and based on what happened, they are destroying our country.  Whether it’s at the border. Whether it’s on crime. I can say in plenty of instances including military, you look at the leaders of military, the woke leaders of military, we have to focus on our great military for what it’s supposed to be – to protect us against very powerful countries like Russia, and China, and others who don’t exactly love us.”

The edit, called a “jump edit” takes place at 09:03 of the presented video below:

This is just as bad as Big Tech. They are putting President Trump’s honest statement, and the concerns of tens of millions of Americans, down the Memory Hole.

I guess it’s FILTERED after all, @dbongino.

It is sad that news organizations are editing things to avoid letting Americans know the truth. I guess it’s nothing new, but it is definitely bad for our republic.

The story comes as controversy has continued to spread over the critical race theory, with many lawmakers across the country moving to ban the teaching of the theory in public schools over concerns that it is racially divisive.

The Biden agenda is also set to face legal challenges, with some of his race-based initiatives already suffering setbacks in court challenges.

“This case is about whether the government can allocate limited coronavirus relief funds based on the race and sex of the applicants,” a federal judge wrote in a case challenging the Biden administration’s plan to favor some races in the distribution of COVID-19 relief funds. “We hold that it cannot. It is indeed ‘a sordid business’ to divide ‘us up by race.’ And the government’s attempt to do so here violates the Constitution.”

Discrimination based on race is illegal regardless of who is doing it and who it is against. All four of these policies need to be shot down by the courts before they see the light of day.

On Friday, Dan Bongino reported that Facebook had prevented users from sharing the recent article in The New York Post about the real estate purchases of the head of Black Lives Matter.

On Thursday, Facebook decided its users should not be able to share a New York Post article about the property-buying habits of one of the founders of Black Lives Matter.

This is the third time we’ve tangled with social media giants in the past year. In the early days of the COVID-19 pandemic, we published a column that suggested the virus could have leaked from a Chinese virology lab. Facebook’s “fact checkers” decided this was an opinion you weren’t allowed to have and blocked the article. Today, it’s a commonly discussed theory, with officials from former CDC Director Dr. Robert Redfield to CNN’s Sanjay Gupta saying it can’t be discounted. Even the head of the World Health Organization (WHO) has said it can’t be ruled out.

In October, we published a series of articles about a laptop Hunter Biden left at a Delaware repair shop. Twitter suspended our account. You probably know how that ended. Twitter CEO Jack Dorsey admitted to lawmakers months later it was a “total mistake.”

We were right both times. We’re right this time, too.

Please follow both links above to read both articles. Unfortunately, neither the American press or social media is doing a reasonable job of reporting in an unbiased manner or of keeping Americans informed. That is dangerous to our Republic.

Today the Dan Bongino website posted an article about five far-left promises the Biden administration has kept since taking office.

3. Pledge to Get Back into the World Health Organization (W.H.O.)

4. Rejoining the Paris Climate Accord

5. Halting Deportations for Most Illegal Aliens

Please follow the link to the article to read the details given.

I would like to mention the impact of a few of these policies. Revoking the Keystone XL Pipeline moves America away from energy independence. It costs Americans involved in the project their jobs and puts small supporting businesses in the area in jeopardy. Ending migration controls is resulting not only in a crisis at our southern border, but also in the release of people who have the coronavirus into the general population throughout the country. Getting back in the W.H.O. is simply giving taxpayer money to a corrupt organization that is responsible for the deaths of many people worldwide because it bought the Chinese propaganda about the coronavirus. Rejoining the Paris Climate Account will result in Americans losing their jobs and a lower standard of living for everyone. Halting deportations for most illegal aliens puts a drain on the social safety net in cities and towns where the illegals choose to go. Again, that is a drain on American taxpayers.

Dan Bongino posted an article today about a thirty-six page report on the 2020 election released by Peter Navarro, Director of the Office of Trade and Manufacturing Policy. 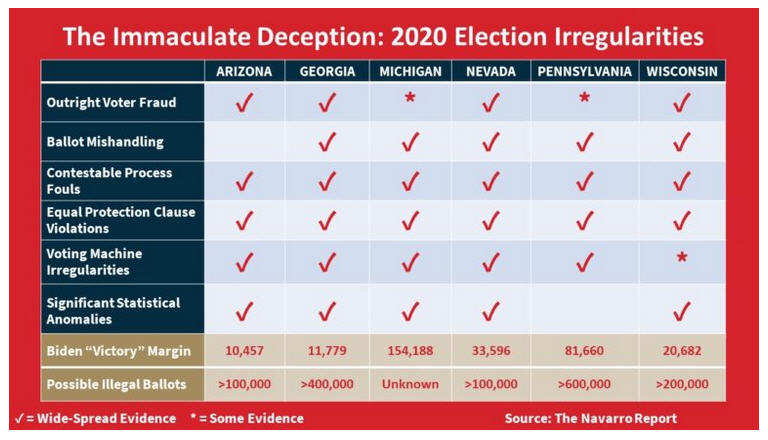 This is the link to the full report.

Here are a few highlights:

Of dead and “ghost” voters, the report states:

In the section of the report on election voting machine irregularities, the report makes note of a number of improbable vote surges all in favor of Biden:

Houston, we have a problem. If this stands, will we ever have an honest election in America?

“The Secret Service does not make political decisions,” Bongino said. “The Secret Service makes security decisions. His statement that it was a Secret Service decision internal budget decision–and keep in mind, I’m not speaking for the Secret Service, I’m speaking from experience of being with them. All he’d have to do is cancel one or two of his political trips and his Martha’s Vineyard vacation, which two years ago I was on and helped coordinate, he would save that money times ten. There was just no way this was a sound decision. To insinuate this is the first administration where the White House social office and the Executive Office of the President had no role in cancelling public tours at the White House, that he was the first president who was left out of the decision, is absolute nonsense.”

President Obama is rapidly destroying any credibility that he might have had when he took office. It is a small lie, but it is a lie. It would be nice if President Obama would at least admit that he made the decision.