On Saturday (updated Sunday), The U.K. Daily Mail posted an article about new evidence of misconduct by those who are attempting to sell the idea of global warming.

The Mail on Sunday today reveals astonishing evidence that the organisation that is the world’s leading source of climate data rushed to publish a landmark paper that exaggerated global warming and was timed to influence the historic Paris Agreement on climate change.

A high-level whistleblower has told this newspaper that America’s National Oceanic and Atmospheric Administration (NOAA) breached its own rules on scientific integrity when it published the sensational but flawed report, aimed at making the maximum possible impact on world leaders including Barack Obama and David Cameron at the UN climate conference in Paris in 2015.

…But the whistleblower, Dr John Bates, a top NOAA scientist with an impeccable reputation, has shown The Mail on Sunday irrefutable evidence that the paper was based on misleading, ‘unverified’ data. 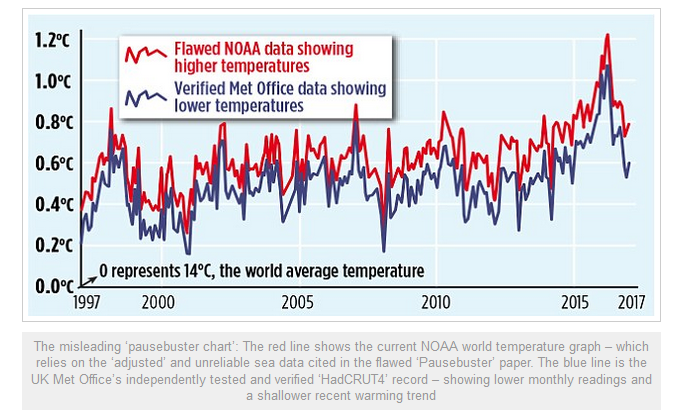 The article at wattsupwiththat further reports:

NOAA not only failed, but it effectively mounted a cover-up when challenged over its data. After the paper was published, the US House of Representatives Science Committee launched an inquiry into its Pausebuster claims. NOAA refused to comply with subpoenas demanding internal emails from the committee chairman, the Texas Republican Lamar Smith, and falsely claimed that no one had raised concerns about the paper internally.

Last night Mr Smith thanked Dr Bates ‘for courageously stepping forward to tell the truth about NOAA’s senior officials playing fast and loose with the data in order to meet a politically predetermined conclusion’. He added: ‘The Karl study used flawed data, was rushed to publication in an effort to support the President’s climate change agenda, and ignored NOAA’s own standards for scientific study.’

Last night Mr Karl admitted the data had not been archived when the paper was published. Asked why he had not waited, he said: ‘John Bates is talking about a formal process that takes a long time.’ He denied he was rushing to get the paper out in time for Paris, saying: ‘There was no discussion about Paris.’

He also admitted that the final, approved and ‘operational’ edition of the GHCN land data would be ‘different’ from that used in the paper’.
I am not a scientist, but I recognize a scam when I see one.
On March 30, 2016, I posted the following (here):

Have doubts? Then listen to the words of former United Nations climate official Ottmar Edenhofer:

I hate to be cynical about this, but it seems as if the expression ‘follow the money’ applies here. One of the power blocs in the United Nations is the Organization of Islamic Cooperation (OIC). Despite the fact that many of the 57 nations in this group are very wealthy due to oil money, many of the people in these countries live in extreme poverty. The OIC looks at the prosperity of western countries and wants their money. They already get a lot of our money because they have oil, but greed is greed. Redistribution of wealth will leave wealthy democracies poorer and enrich dictatorships that are currently poor.

A few years ago, I posted an article about the relationship between property rights and poverty. The article was based on a Townhall.com article by John Stossel. The article included the following:

“”To get an address, somebody’s got to recognize that that’s where you live. That means … you’ve a got mailing address. … When you make a deal with someone, you can be identified. But until property is defined by law, people can’t … specialize and create wealth. The day they get title (is) the day that the businesses in their homes, the sewing machines, the cotton gins, the car repair shop finally gets recognized. They can start expanding.”

“That’s the road to prosperity. But first they need to be recognized by someone in local authority who says, “This is yours.” They need the rule of law. But many places in the developing world barely have law. So enterprising people take a risk. They work a deal with the guy on the first floor, and they build their house on the second floor.”

This is the concept the global warming alarmists want to eliminate. We need to make sure that they are not successful.