The Federalist posted an article today about a recent decision by the EU’s Court of Justice (ECJ), the highest court in the EU. The court ruled that Jewish products made in contested areas of Israel must bear consumer warning labels.

Prior to the ruling, U.S. lawmakers in Congress fired warning shots, cautioning the EU that such a move would prompt the enforcement of American anti-boycott laws, thus endangering the EU’s trade with the United States.

Now, according to reporting by Adam Kredo of the Washington Free Beacon, the Trump administration is ready to go to battle over the ruling. Currently, the United States is the EU’s largest trading partner.

The origins of the legal dispute stretch back several years to when the EU issued a mandate in 2015 declaring that products produced in the West Bank and Golan Heights be labeled as coming from an Israeli settlement, facially for the purpose of promoting “consumer protection,” although it’s unclear if that is actually achieved here. In late 2016, France became the first EU member state to attempt to enforce the mandate, resulting in the Israeli winery Psagot filing a lawsuit claiming that such a mandate violated the EU’s anti-discrimination laws.

Under the new rule, goods produced by Jews will be labeled as having been produced in an Israeli settlement, while goods produced by Muslims may be labeled as made in “Palestine,” indicating blatant discriminatory treatment. Unsurprisingly, Israel’s presence in the West Bank and the Golan Heights are the only contested areas in the world to be the focus of the labeling ire of the EU.

The article notes that Israel is the only country singled out for this treatment:

“No other territory, occupied, disputed, or otherwise is subject to such requirements,” noted Eugene Kontorovich, director of the Center for International Law in the Middle East at George Mason University. Kontorovich emphasized the peculiarity of the ruling. “In no other case does any ‘origin labeling’ require any kind of statement about the political circumstances in the area. This is a special Yellow Star for Jewish products only.”

Indeed, there are a multitude of contested areas throughout the world that produce goods for which the EU has deemed politicized labeling requirements unnecessary. Despite Russia’s occupation of parts of Georgia or Morocco’s occupation of Western Sahara, nothing in EU law or greater international law requires labeling goods produced by Russia in occupied parts of Georgia as “Made in Georgia” or goods produced by Morocco in Western Sahara as “Made in Western Sahara.”

Just a side note about the concept of contested territories. If you look at a map of the land originally given to form a Jewish state, it not only includes the ‘contested territories,’ it includes Jordan. The country of Jordan was originally intended to be the Palestinian state (as there had never been a Palestinian state), but was turned over to the Hashemites. For pictures illustrating the history of Israeli territory, go here.

A friend sent me a link to a Washington Post article posted on October 9. The headline in the article is, “A second Michigan instructor withheld a recommendation letter from student headed to Israel.”

The disturbing part is the reason given: 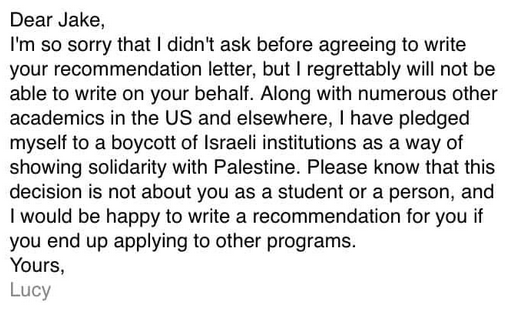 Her email echoed the one that arrived last month in the inbox of Abigail Ingber, another junior at the University of Michigan.

“I am very sorry, but I only scanned your first email a couple weeks ago and missed out on a key detail,” John Cheney-Lippold, a cultural studies professor, wrote to Ingber in early September, upon realizing that the reference was for a program at Tel Aviv University. “As you may know, many university departments have pledged an academic boycott against Israel in support of Palestinians living in Palestine. This boycott includes writing letters of recommendation for students planning to study there.”

The concept that Israel includes Palestinian land is simply not true. As Walid Shoebat has stated, “One day during the 1960s I went to bed a Jordanian Muslim, and when I woke up the next morning, I was informed that I was now a Palestinian Muslim, and that I was no longer a Jordanian Muslim.” Jordan was established to be the Palestinian state. The Palestinians were kicked out of Jordan after they attempted to overthrow its government. The Arab countries have kept them as refugees for generations in order to gin up anger against Israel with the hopes of driving the Jews into the sea. It is unbelievable that our college professors are encouraging this sort of behavior. It’s a shame our college teachers don’t know history. In actuality, the land occupied by Jordan was initially given to Israel.

Michael Zakim, a cultural historian at Tel Aviv University, argued that the boycott would end up undermining “the Palestinian struggle” by unwittingly supporting forces “determined to delegitimize the humanism and internationalism that predominates on Israeli university campuses.” He labeled as “inanity” some of the means taken to “discredit Israeli academic culture,” such as the refusal to serve as an external reader on a dissertation.

Feisal G. Mohamed, then of the University of Illinois and now at the Graduate Center of the City University of New York, responded, saying the boycott didn’t compel each of the actions decried by Zakim. Still, he reasoned, “any and all available means must be used to end an occupation.”

At Michigan, the board of regents declined last year to form a committee to investigate divesting the university’s endowment from companies doing business with Israel, after the student government passed a resolution supporting such a move.

But refusing to throw its weight behind BDS isn’t enough, Secker (Jake Secker) warned. If the university doesn’t take further action to insulate its students from the political actions of their professors, he said, it could have a crisis on its hands.

“This is an epidemic that’s starting to begin,” he said. “Especially being someone who has an Israeli background, I took it personally. It really disturbed me.”

Any university discriminating against students who want to study in Israel should lose all federal and state funding. BDS is not an acceptable policy, and the government should not be funding it.

Since I am technologically challenged, I have no idea how to embed a video into this website. I apologize. However, I will provide a link to a YouTube video that clearly and concisely explains the history of the State of Israel. This video helps understand how we got to the place we are today in regard to peace in the Middle East. Enjoy.

This is the logo for the Permanent Observer Mission of Palestine to the United Nations. The Weekly Standard posted this picture yesterday.

Please notice that there is no Israel on this map of the area where Israel currently exists. That should tell us everything we need to know about the intentions of the Palestinians in regard to Israel. Do we really want to create another terrorist state in the Middle East? Aren’t there enough already?

Also, my favorite quote regarding Palestinian statehood is from Walid Shoebat:

“Why is it that on June 4th 1967 I was a Jordanian and overnight I became a Palestinian?”

If the United Nations ever wants to be a force for peace in the Middle East, they will vote down the Palestinian request for statehood, stop sending Palestine money, and tell the Palestinians to create a peaceful nation with infrastructure (rather than spending all their money on weapons) and then come back again. We need to remember that when Israel turned over the Gaza Strip to the Arabs, it was an economically viable area with a worldwide business of exporting flowers. The Arabs promptly destroyed the greenhouses and turned it into a poverty-stricken ghetto. Unless the Arabs in Gaza and the West Bank show a desire and effort to create a functional, peaceful society, they should be shunned by the rest of the world. We don’t reward children when they behave badly and destroy things, we shouldn’t reward grown-ups who do that either.

Yesterday Scott Johnson at Power Line posted a story about protests that took place in London last Thursday when the Israeli Philharmonic, led by Zubin Mehta, participated in the annual eight-week summer season of daily orchestral classical music concerts known as the Proms. The concert by the Israeli Philharmonic was disrupted to the point that the BBC cut off its live broadcast.

…the repeated disruption of its (the Israeli Philharmonic) concert at Royal Albert Hall in London on Thursday night by pro-Palestinian demonstrators, to the point that the BBC cut off its live broadcast and played recordings of the evening’s program instead.

Stephen Pollard in the UK Telegraph had a slightly different take:

But Thursday night’s events can only be understood in the context of anti-Semitism. When have there been similar protests against “violations of international law and human rights”, as was chanted on Thursday, by any other country? And this in the middle of the Arab Spring, when genuine protesters for human rights are daily risking their lives in Syria against a murderous dictatorship.

If, indeed, this was a protest against the actions of the Israeli government, rather than against Jews, where have been the similar disruptions of performances by Russian, Chinese, Turkish, Iranian or any number of other nations’ musicians? What about disruptions of British national companies, in protest at British human rights abuses? To pose the question is to answer it. There’s little doubt in my mind that this was an action motivated specifically by the fact that the performers were playing in the national orchestra of the Jewish state.

If the Jews are the canary in the coal mine, we need to pay attention–the gas is rising. As the day nears when Palestine will unilaterally declare itself a state–regardless of the fact that it has never adhered to the Oslo Accords, we can expect to see more accusations against Israel and more anti-Semitism under the guise of supporting human rights. This is the same kind of upside down logic that has been used in the past to persecute Jews. We need to our own research on what is happening rather than believing everything we see in the news.