On June 23rd, The New York Post reported that the U.S. Supreme Court had struck down the restrictions New York State had put on concealed carry permits.

Writing for the 6-3 majority, Justice Clarence Thomas said Thursday that the law’s requirement of New Yorkers who want a permit to carry a handgun in public to show “proper cause” that the weapon is ​specifically needed for self-defense “violates the Fourteenth Amendment by preventing law-abiding citizens with ordinary self-defense needs from exercising their right to keep and bear arms in public.”

Well, the New York legislature decided that the Supreme Court decision was unacceptable.

On Saturday, The American Thinker reported:

After an extraordinary session for the explicit purpose of defying the Court, Senate Bill S51001 was rammed through on a party-line vote by the Democratic supermajority, passed the Assembly, and received the signature of Gov. Kathleen Hochul.

Writing for the majority in Bruen, Justice Clarence Thomas struck down New York’s century-old requirement that an applicant for a handgun carry permit demonstrate a “special need” if he wanted to carry for self-defense.  New York’s licensing process was entirely discretionary and arbitrary, and in many jurisdictions, licensing officers simply refused to issue permits for self-defense.  This was particularly true in New York City, where applicants were routinely and summarily rejected unless they were politically connected or celebrities — such as Howard Stern, Donald Trump, and Don Imus.  In other jurisdictions, licensing officers simply invented acceptable reasons on a whim, often issuing handgun licenses for “hunting and target shooting” only, if at all.  (In one rural upstate county, a former judge who had authority as a licensing officer invented a requirement that he would not allow any permit-holder to have more than five handguns without appearing before him personally and giving a “good reason.”)

In Bruen, Justice Thomas ruled that these arbitrary restrictions were unconstitutional and violated the Second Amendment’s guarantee to keep “and bear” arms for self-defense, ordering New York State and New York City to issue concealed carry permits to qualified applicants for that reason.

In response, Gov. Hochul (who was endorsed by the NRA in 2012 when she ran for Congress in rural Western New York) vindictively declared that New York would restrict guns to the point where the State would “go back to muskets.”  Hochul called the Legislature back from recess and presented a bill that criminalizes as a felony offense concealed carry in perhaps 98% of the state.

At some point you begin to wonder why some people in our government are so anxious to take guns away from law-abiding citizens.

“There can be no question that every person in this State wishes, wants and prays that this era of COVID ends soon and they will surely do their part to see that is accomplished,” Judge Thomas Rademaker said in the ruling. “However, enacting any laws to this end is entrusted solely to the State Legislature. While the intentions of Commissioner Bassett and Governor Hochul appear to be well aimed squarely at doing what they believe is right to protect the citizens of New York State, they must take their case to the State Legislature.”

Hochul responded by saying  in a statement that her “responsibility as Governor is to protect New Yorkers throughout this public health crisis” and claiming that her mask mandate would “help prevent the spread of COVID-19 and save lives.”

There is no scientific evidence that masks prevent the spread of the coronavirus or save lives. One scientist has compared wearing a cloth mask to protect from the coronavirus to putting up a chain-link fence to keep out mosquitoes. It’s time that we get back to the actual process of making laws that is enshrined in our Constitution–laws are made by legislative bodies elected by the citizens and held accountable by the voters.

On Friday, Fox News posted an article about hospitalizations for Covid in New York State. It turns out that the numbers being reported include people admitted to the hospital for a problem unrelated to Covid who test positive for Covid.

This is a screenshot of the chart: 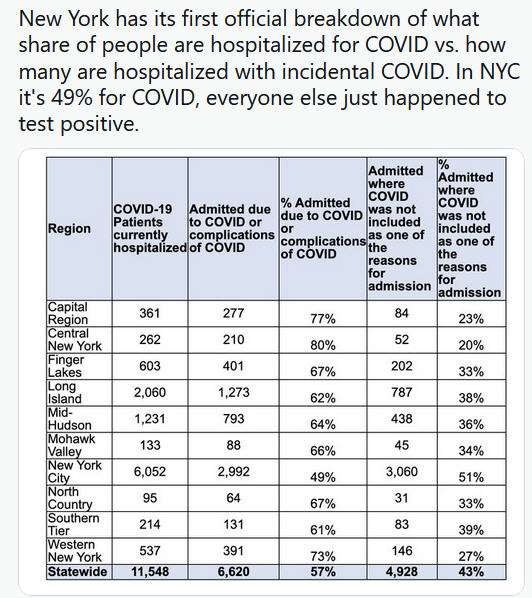 Hochul’s administration recently faced backlash after revealing that it will prioritize non-White people in the distribution of COVID-19 treatments in short supply.

New York’s Department of Health released a document detailing its plan to distribute the treatments, such as monoclonal antibody treatment and antiviral pills.

The plan includes a section on eligibility for the scarce antiviral pills that people must meet to receive the treatment, including a line stating a person needs to have “a medical condition or other factors that increase their risk for severe illness.”

This is the breakdown of the vaccinated and unvaccinated in New York City (article here):