Today Diane Rufino posted an article at her For Love of God and Country Blog about the caravan making its way to America from Central America. The article quotes filmmaker Ami Horowitz who traveled to Mexico to report of the caravan.

“Despite the framing of the caravan as being full of woman and children, the reality on the ground is quite different. Approximately 90-95% of the migrants are male. The major narrative being pushed by the press is that the migrants are fleeing Honduras because they are escaping extreme violence and that their lives are under a constant threat of it, setting up the strategy that they will be able to enter the US by asking for asylum.  So I began by asking the men a simple question:  ‘Why are you coming to America?’

There is a massive logistical effort underway (Ami shows footage of several large carrier trucks), akin to moving an army, that is clearly costing someone millions of dollars for the transportation, food, water, medicine, supplies, and services that are being provided for the members of the caravan.

Mr. Horowitz notes a darker aspect of the caravan:

Ever present among the thousands of migrants are workers from Pueblo Sin Fronteras, clad in black tee shirts and colored vests. ‘Pueblo Sin Fronteras’ means ‘People without borders.’ They are the ones who seem to be most involved in organizing and mobilizing this caravan. The organization, as the name implies, is looking to create a world without borders, which seems to be one of the reasons why they organized this caravan in the first place. It’s looking to challenge American sovereignty. While it does seem that the majority of the migrants are friendly and simply want a better life for themselves and their families, there’s an undeniable element among the migrants that is violent and dangerous. The migrants know this and some have even experienced their violence firsthand.

So what might be some of the motives behind this caravan? First of all, the Democrats will score political points against President Trump if there is any sort of incident at the border, and it is quite likely there will be something for the biased cameras of the mainstream media to focus on. Second of all, the Democrats hope that these ‘migrants’ will be future Democratic voters.

However, there are some behaviors going on in this caravan that are not typical of people seeking asylum.

Looking at the videos and looking at the thousands and thousands in this caravan, it can’t be over-stated that almost the entire migrant population is comprised of males. They leave a huge mess wherever they stay and in many cases, you see them carrying the flag of their countries. You also see them burning the American flag and shouting insults and obscenities at our president. People seeking asylum don’t come here with flags from their country; invaders do. People who want to become Americans don’t show hatred for us.

One final thought: How do you make America great again?? You have a country full of those who love her and want to contribute to her success, who reflect her values in the way they conduct themselves and live their lives, who support the president and government when they take measures to improve her situation, reputation, and standing, and who are patriotic. You do NOT make America great by allowing unchecked immigration of those who fly the flag of other countries, who burn our flag or otherwise desecrate it, who carry signs “America is evil” or “America is the great Satan” or “F*** Trump,” who are criminals or have criminal tendencies, who are engaged in the South American drug rings or Mexican drug cartels, who seek to drive trucks into crowds of innocent people, plant bombs at a marathon, blow up community centers, nightclubs, or other buildings, or shoot up our citizens or members of our military at their bases.

In order to Keep America Great, the federal government (in concert with the states) need to fix our broken immigration system, set limits on immigration, set limits on the numbers coming from various parts of the world (as we have done throughout our entire history), and refuse – absolutely refuse – to give in whenever shenanigans like this caravan threaten to cross our border. After all, it is an express Constitutional responsibility of government and was a condition of our joining into this union known as the United States. If the government doesn’t have to exercise its responsibilities, then we shouldn’t have to as citizens. That’s the nature of a Constitution.

We need to remember that those supporting the idea of open borders do not have the best interests of the American people in mind. We need to reform our immigration policies, but not under threat of invasion.

Yesterday Townhall posted an article about some recent arrests in Georgia.

Thanks to a combined effort of the U.S. Drug Enforcement Administration, the Lawrenceville Police Department, East Point Police, and the Georgia State Patrol four Mexican nationals have been arrested in Gwinnett County, GA this week for their connection to a Mexican drug cartel. These illegal aliens were found with 5 million dollars worth of methamphetamine, cocaine, and heroin laced with fentanyl as well as $850,000 in cash and weapons located in a storehouse in the metro Atlanta area.

According to NBC 11 Alive, DEA Special Agent in Charge Robert Murphy said the investigation into the cartel started last year. Friday’s drug bust of the men’s home occurred after a tip came in on Thursday evening.

We had people connected to a Mexican drug cartel operating in Georgia. These people were selling drugs. Among those drugs was heroin laced with fentanyl. Fentanyl kills people. Cartels kill people. If the southern border were properly sealed, do you think these people might have had at least a slightly more difficult time doing business in America?

Our open border is a risk to all Americans. We need to close our borders to illegal immigrants and drug traffickers. We need to revise our immigration policies so that people can come here legally if they are willing to assimilate, follow the laws of America, and become contributing citizens. Otherwise, there is no reason for them to be here.

Border security under former President Obama was something of a joke. Border patrol agents were simply not allowed to do their job. Certain areas of America were marked with signs indicating it was dangerous to go there because drug cartels were using those areas to conduct business (inside America). Well, there is a new sheriff in town, but he sure has a lot to clean up. 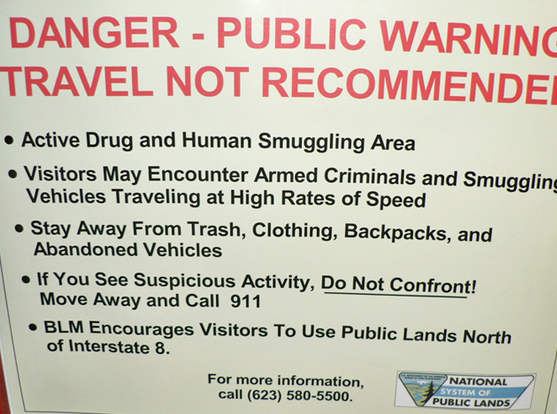 On February 7th, Judicial Watch posted an article about the reach of Mexican drug cartels into America. It’s not good news.

Illustrating that the Mexican drug crisis is having a far-reaching impact on the U.S., a heroin ring operated by a Mexican cartel was recently busted in an American suburb more than 1,500 miles from the southern border. In the last few years Judicial Watch has reported extensively on the massive amounts of drugs—especially heroin—that get smuggled into the U.S. by Mexican traffickers who later use street, prison and outlaw motorcycle gangs to distribute them throughout the country. Undoubtedly, these enterprises benefitted tremendously from the Obama administration’s open border policies.

Now we have confirmation that these illicit drug operations have penetrated areas far from the border. This case comes out of Rowan County, North Carolina where a local news report reveals that authorities began targeting large-scale heroin distribution in 2013. Last week three people with ties to a Mexican drug cartel were arrested in the county. Large quantities of heroin, handguns, a rifle, ammunition, numerous telephones, cash and drug paraphernalia was confiscated by police. Authorities say the Mexican heroin trafficking ring was based in the Charlotte-Matthews area and has been supplying heroin to Rowan County for more than a decade. “Over the past two months, investigators purchased large amounts of heroin from two people working for this Mexican National Drug Trafficking Organization,” the news report states.

A big part of the problem is that the drug trafficking is being leveraged by corrupt public officials in the U.S., a years-long Judicial Watch investigation has found. Undoubtedly, cartel violence is real but truckloads of drugs are getting across the country because U.S. officials at the municipal, state and federal level are turning a blind eye or actively participating and cooperating with cartels. As part of an ongoing probe, Judicial Watch has provided the Department of Justice (DOJ) Inspector General and Senate Judiciary Committee Chairman Chuck Grassley with evidence, including the sworn testimony of law enforcement officers, of this corruption and criminality in all levels of government. Learn more about Judicial Watch’s probe here.

Hopefully the new sheriff in town can put an end to this activity. However, when you realize how pervasive the corruption is, you begin to understand some of the opposition to President Trump. There is a lot of money tied up in the drug trade that does not want the new sheriff to interfere with that money. Our future as a nation is at stake–it is time to get control of our borders.