Townhall posted an article today about an eagle used on t-shirts by the Trump campaign. The eagle is an ‘imperial eagle.’ Some over-excited members of the press are describing the eagle as a “Nazi symbol.”

Before you get to concerned about that, you might want to examine the history. 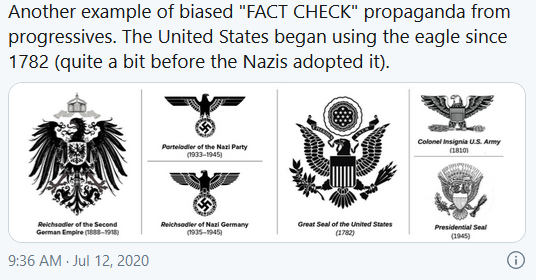 The following is from the USA Today fact check on the matter: 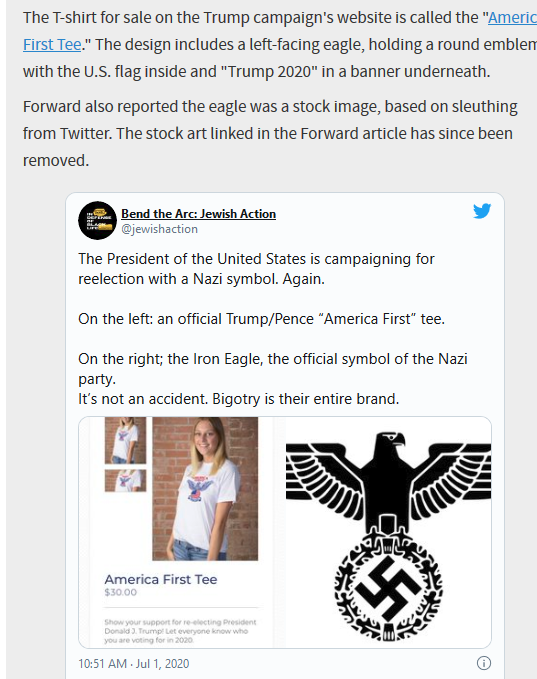 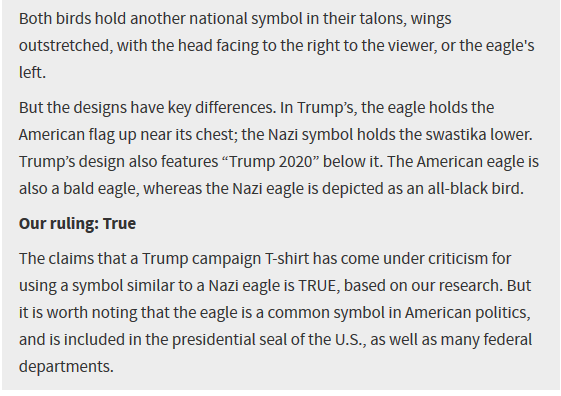 This is the very example of why the American people hate the mainstream media. Everyone has become obsessed with these “fact checks,” yet simple things like this are totally bogus. For whatever reason, anything and everything President Donald Trump and his campaign does has to be racist or stoke anti-Semitism. The term “Make America Great Again” has been labeled racist. These shirts are being compared to Nazi Germany propaganda.

Unfortunately this sort of reporting is why many ill-informed Americans believe that the President is a racist. Based on his history, this is simply untrue. To claim that President Trump is a racist simply divides Americans and creates an obstacle to our working together to better the country.

I understand that some people truly dislike President Trump (and his supporters). Chances are they get their news from the mainstream media and are totally unaware of the good things he has done for America. They have made the choice not to notice when the economy improves or our overseas military escapades seem to be winding down or when America becomes energy independent. That’s fine. They are totally entitled to their opinion. However, they do not have the right to harm people because they disagree with them politically. If you are ‘triggered’ by someone wearing a ‘Make America Great Again’ hat, maybe you should look at your own problems rather than attack the person wearing the hat. Civility is rapidly becoming a lost art.

A Denver city councilwoman appeared to cheer on a message about spreading the coronavirus at one of President Trump’s rallies.

Councilwoman Candi CdeBaca, a Democrat, enthusiastically responded last week to a tweet that featured a graphic that said, “For the record, if I do get the coronavirus I’m attending every MAGA rally I can.”

Her quote tweet said, “#solidarity Yaaaas!!” along with five emojis, three of which were faces laughing so hard that they were crying.

The councilwoman later responded to a reporter’s tweet, saying, “1. Are you listening to ANYTHING Trump has said about the virus? 2. Do you realize Trump reduced the virus to a common flu? 3. I know sarcasm is hard to read in a tweet, but you are usually a bit quicker than this. Next time I will use more emoji’s just 4 you.”

Neither the city council’s office or the Trump campaign responded to a request for comment.

Is she aware of the precautions the Trump administration has taken to prevent the spread of the virus in America? Is she aware of the task force that was formed in January to combat the virus in America? Even if she is not aware of the efforts made to protect Americans, her comments are totally inappropriate. I don’t know if I would remove her from office, but I certainly believe she needs to apologize and to understand that her comments were not befitting an elected official.

Yesterday Fox News reported that of the film “The Hunt” about liberals hunting conservative “Deplorables” who fit the description of supporters of President Trump.

I can’t help but wonder why the movie was made in the first place. Did the producers think this was a good idea?

In a statement, a Universal Pictures spokesperson said “the studio has decided to cancel our plans to release the film … we understand that now is not the right time to release this film.”

Someone needs to sit down with the head of Universal Pictures and explain that there is never a good time to release a film about killing people whose politics you disagree with!

Understandably, initial reaction to the trailer centered on the horrific callousness and immorality of hunting and killing people for their ideologically conservative beliefs. It’s quite jarring to see.

The trailer seemed to be tapping into the same sort of anger and sense of disenfranchisement that many believe led to Trump’s populist rise.

Imagine the protests if the film had taken a different tack and portrayed Trump supporters hunting down supporters of one of the Democratic presidential candidates. The protests would have been justified.

In the end, those of us with a religious, conservative worldview welcome a civil, respectful and spirited debate with those on the other side, believing that our principles and values will lead to a flourishing and more prosperous world.

The cancelation of the release of “The Hunt” is a step in the right direction. We must all live and work with those we disagree with and try to understand their point of view. Letting our disagreements escalate into violent attacks on one another is neither acceptable nor entertaining.

We have a problem in America with people deciding it is their right to harm people who disagree with them. It is not safe to wear a Make America Great Again hat in some parts of the country. We recently saw journalist Andy Gno severely beaten at a rally in Portland, Oregon. As I have said, I don’t understand why those in charge at Universal decided to make this movie in the first place. I am glad they finally came to their sense and chose not to release it.

Channel 25 in Boston reported yesterday that Rosiane Santos, 41, of Falmouth, Massachusetts, was arrested last Friday at a Mexican restaurant in Falmouth for assaulting a man because he was wearing a “Make America Great Again” Hat. The man involved, 23-year-old Bryton Turner of Mashpee, was smart enough to record the incident on his cell phone when she began verbally attacking him. The verbal attacks were followed by knocking the hat of off his head multiple times.

The most interesting part of this is found in the concluding paragraphs of the article:

As Falmouth police officers were escorting Santos out of the restaurant, Macarao (bartender Geo Macarao) said she took another swipe at Turner.

“I couldn’t imagine somebody just coming up and hitting them when there’s cops right here,” Macarao said.

“She just tried to grab my hat in front of four officers, not smart,” Turner said.

Santos, a Brazilian immigrant, said while she regrets her actions, she claims she was provoked.

“I had a little bit to drink maybe that’s the reason that I couldn’t walk away but being discriminated for so many times in my life, I just had to stand up for myself,” she said. “He’s not a victim. I am the victim. I have been bullied, OK?”

So let’s look at the logic here for a minute. It was okay for her to assault someone because she had a little too much to drink, she had been bullied in her life, and she had to stand up for herself. How was assaulting a man who simply entered a restaurant to pick up his food standing up for herself?

Last Thursday Breitbart posted a list of “305 Acts of Violence and Harassment Against Trump Supporters.” I don’t care what you think of President Trump or what you think of anything he has done, this is not acceptable. Some of the political left is using the argument that ‘he started it’ and then naming some outrageous statement by the President. However, that is no excuse–President Trump is not assaulting people, throwing drinks at them, harassing them in public places or stealing or destroying their property. Some of his opponents are.

Here are only the top 25 items on the list:

At some point we all need to get along. We are never going to agree on everything. The press is playing a large role in this–they have been running around with their hair on fire since the 2016 election. The press has refused to report on much of this and refused to condemn on what it has reported. The left political spin is that any violence is President Trump’s fault because he is so over the top. The actual truth is that the deep state is feeling backed into a corner and is reacting like a cornered animal. Unfortunately, until the American voters wake up and realize that the press is manipulating them, we will probably see more of this.

The article reports some of Ms. Macias’ comments:

The alleged thief, Ethnic Studies major Edith Macias, accuses the student of endorsing “genocide” by owning the hat. “So this guy thought it would be a good idea to go into a conference wearing this f***ing hat,” the student says in the video. “Look at the kind of sh*t he’s wearing, You know what this represents? This represents genocide—genocide of a bunch of people.”

“Do you have any f***ing conscience?” she continues, before adding that “f***ing freedom of speech is genocide, homeboy.”

“Are you people not going to do anything? She is stealing my property,” Vitale says, as university staff looks on silently.

“We will need to return his property to him, but we can talk about…” one university employee eventually interjects.

“How about we talk about not letting him wear this sh*t on campus?” Macias says.

“The fact that you people haven’t gotten this back for me is sad and wrong,” Vitale says at one point.

“Oh my God, you’re going to keep letting him wear it?” Macias says. “That just shows how the f— UCR is and the education system. It’s geared to benefit white people, white people, not me.”

This is frightening. First of all, she is an Ethnic Studies major. How does one turn that into a marketable skill after graduation? Second of all, in what universe is Donald Trump connected to genocide? The man has won awards for helping minorities succeed (but that was before he was a Republican and became President). Does she realize that President Trump’s Cabinet includes minorities?

Where did she get her information? Do her comments reflect what she is being taught in school? Is there any truth or logic to anything she is saying?

This is a whole new level of insanity from our college campuses.