It seems as if there are some serious questions that need to be asked about the integrity of the election that just took place. Some of the accusations being made about voter fraud seem too over the top to be true. However, it looks as if some of those accusations may actually be true. I don’t suspect a lot of what we are seeing is new. My question is, “Why have both the Republicans and the Democrats allowed voter fraud to continue in our major cities?” The fraud seems to go one way, and yet the other party has never really confronted it. We all remember when Mayor Daley of Chicago magically found enough votes to elect John F. Kennedy as President. That was seventy years ago, and although the techniques have gotten much more sophisticated, very little has changed.

The Conservative Treehouse posted an article today that included the following video:

I am embedding the video in case it disappears from the Internet. 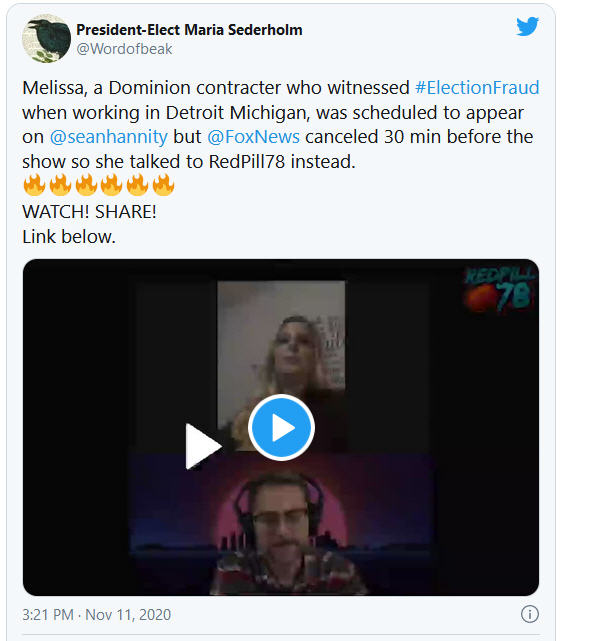 I am sure that cancelling her appearance was part of the new political alignment of Fox News. I wonder how long Tucker Carlson, Sean Hannity, and Laura Ingraham will remain at that channel.

The article at The Conservative Treehouse reports:

If what Ms. Mellissa Carone outlines is true, this would explain how the ballots in Michigan were manipulated. Ms. Carone was a contracted worker for Dominion a company providing software services for ballot counting machines in Detroit.

Carone was sent to Detroit, Michigan, to provide technical support for the ballot counting process. While she was there she noted poll workers repeatedly double scanning ballots to generate multiple votes from the same batch of ballot sheets. When she reported this to her employer, Mr. Nick Ikonomakis of Dominion, Carone was told it was not her role to review what the poll workers are doing; essentially to ignore it.

Ms. Carone also witnessed election workers filling out ballots, fraudulently signing ballots, as well as the unloading of vans in an area of the Detroit election tabulation facility she was not permitted to inspect. Ms Carone was on Fox Business with Lou Dobbs to explain part of what she witnessed.

Stay tuned. If this is not corrected and people held accountable, we will never have an honest election in America.

Yesterday The Gateway Pundit posted an article about some recent findings by John Solomon.

…Yovanovich believes she was unjustly fired despite the fact that she was an Obama holdover, was speaking out against President Trump and she was colluding with the DNC and Hillary Campaign to undermine the US presidential election.

On Friday John Solomon told Lou Dobbs about the fired ambassador’s links to a radical Soros group operating in Ukraine.

On March 20th Solomon published his interview with Ukrainian Prosecutor General Yuriy Lutsenko alleging Yovanovitch gave him a “do not prosecute list,” back in 2016.

According to Redstate – Lutsenko told Solomon that in April 2016, Ukraine’s Prosecutor General’s office was investigating a nonprofit called the Anti-Corruption Action Centre (AntAC). The concern was that $4.4 million the U.S. had sent to help fight corruption in Ukraine had been improperly diverted.

This so-called anti-corruption organization, AntAC, was co-founded by the Obama administration and George Soros.

It’s a fairly long video, but please watch it until the end.

No wonder the Democrats are holding their hearings in secret, if they stumble on the truth by accident, they don’t want it to get out.

Center for Security Policy President Fred Fleitz asks a question we all need to know the answer to. Evidently some of our intelligence people are ignoring direct legal orders from the President. Later, the discussion turns to the situation on our southern border.