While no one is paying attention, charges are being dropped against those ‘protestors’ who looted and burned down cities last summer and those who entered the Capitol Building on January 6th are being kept in solitary confinement with questionable legal representation. Seems a little uneven. Meanwhile, The U.K. Daily Mail reported yesterday that out of the 603 were arrested in Manhattan and the Bronx during the most intense days of looting last June, 295 of the cases have been dropped completely.

‘Those numbers, to be honest with you, is disgusting,’ she told the NBC affiliate. ‘They could do it again because they know they won’t get the right punishment.’

In Manhattan, the NYPD data shows there were 485 arrests connected to last summer’s riots, which saw mobs smashing stores and holding a ‘looting dance party’ in SoHo.

Of those cases, 222 were later dropped and 73 saw convictions for lesser counts like trespassing, which carries no jail time. Another 40 cases involved juveniles and were sent to family court, and 128 cases remain open.

In the Bronx, 118 arrests were made as mobs smashed shops along the borough’s commercial corridors.

Since then, the NYPD says District Attorney Clark’s office and the courts have dismissed 73 of those cases, well over half the total.

Eighteen Bronx cases remain open and there have been 19 convictions for mostly lesser counts which carry no jail time.

One of the excuses given is that there is not enough evidence to prosecute the looters. That’s an interesting statement considering a lot of the looting is recorded on the security cameras of the businesses involved (and the news cameras of local television stations).

Some of us (and many New Yorkers) believe that the Manhattan District Attorney’s office is so focused on finding President Trump guilty of something that they are ignoring their regular duties. Hopefully many of the people in that office will find themselves out of a job after the next election.

Yesterday The Epoch Times reported that Senator Robert Menendez (D-N.J.) blocked a resolution that condemns “mob violence.” That sounds like a common sense resolution that should easily pass the Senate, but it was blocked.

Lee (Senator Mike Lee (R-Utah) ) took to the Senate floor in Washington Thursday to announce his belief that it was important for the Senate to go on record “condemning the rising tide of mob violence we see across the country and the increasingly prevalent mob mentality that’s fueling it.”

Lee cited several recent instances, including the shooting by a protester in Utah, the assault of a Wisconsin state senator by a group that tore down two statues, and the berating of law enforcement officers for standing at their posts.

While some Americans have organized peaceful protests, other events have devolved into rioting, looting, and violence, Lee noted.

Menendez said he objected, arguing that the resolution made no mention “of America’s original sin, which is slavery.”

Many New Jersey residents don’t believe the United States is morally committed to justice, he argued, which would clash with the third paragraph of the resolution. That paragraph states: “The United States is a diverse nation committed to cultivating respect, friendship, and justice across all such differences, and protecting the God-given equal rights of all Americans under the law.”

“I would consider not objecting to the senator’s request if he also recognized and added to his resolution the fact that we have a president of the United States who ultimately provokes—provokes insightful language and violence,” Menendez added, noting that President Donald Trump recently shared a video that included a man saying “white power.”

Lee was willing to accept the proposed revisions except for the part about Trump, saying lawmakers shouldn’t point to one specific individual.

So Senator Menendez was not willing to condemn violence unless the resolution specifically attacked President Trump. Wow. It’s interesting that the Senator blames President Trump for provoking the violence when the violence is generally committed by people who oppose him. That’s like accusing France of starting World War II because they responded when Germany attacked them. Every rioter is responsible for his/her own actions. They can blame no one but themselves. When they are arrested, they will be held responsible. How dumb does Senator Menendez think the American people are?

On Wednesday, The New York Post posted an article about a recent statement by New York Times reporter Nikole Hannah-Jones.

New York Times reporter Nikole Hannah-Jones argued that rioters destroying property is “not violence” — and referring to the crimes as such goes against what’s moral.

“Destroying property, which can be replaced, is not violence. To use the same language to describe those two things, I think is really not moral to do that,” Hannah-Jones, who is Pulitzer Prize winner, told CBSN.

Hannah-Jones, who writes for the Times Magazine, said the language should be reserved for crimes such as the killing of George Floyd, a black man who died in Minneapolis after a white cop, Derek Chauvin, held his knee on Floyd’s neck for several minutes.

“Violence is when an agent of the state kneels on a man’s neck until all of the life is leached out of his body,” Hannah-Jones told the outlet.

Her comments come as cities across the nation have been locked in days of heated protests over the death of Floyd — some of which have resulted in vandalism, looting and arson.

“Any reasonable person would say we shouldn’t be destroying other people’s property, but these are not reasonable times,” she said.

I wonder if she would make that same statement if her family had a business that was destroyed or if the looters came to her residence. What happened to George Floyd was a crime. Committing another crime does not make it right.

Yesterday The Daily Caller posted an editorial contrasting the news coverage of the protests asking the government to reopen businesses and churches and the news coverage of the riots that are currently happening in some of America’s major cities. First of all–it is no longer a protest when the first brick is thrown or the first building is set on fire, yet the media continues to refer to these events are protests.

Just a couple of weeks ago the media was fretting that anti-lockdown protests were endangering the public by gathering in crowds and refusing to wear masks. They were compared to Nazis for wanting to reopen their businesses and go back to work.

Now, thousands of people egged on by Antifa are rioting and looting in multiple American cities. But the media is treating these “protesters” with kid gloves. MSNBC’s Ali Velshi stood in front of a burning building while claiming the Minneapolis riots were mostly peaceful, and Joy Reid tried to blame white supremacists for the uprising.

The first step to dealing with something is correctly naming it. Incorrectly naming something is one way to control a narrative. As long as the media can convince Americans that the looting and burning they are seeing is simply a protest, they can avoid addressing the lawlessness of what is happening. Looters are arsonists are criminals who need to be arrested. Protestors are people peacefully exercising their First Amendment rights. There is a difference. 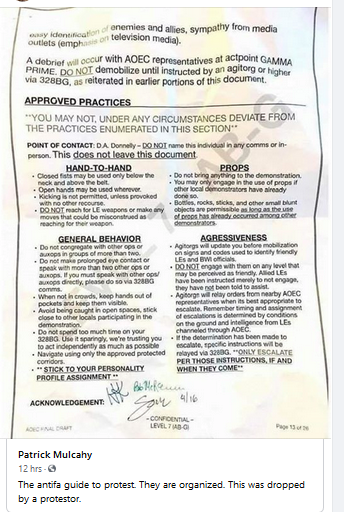 These are not spontaneous protests. They are being orchestrated with a purpose. The idea is to undermine everyone’s sense of security and hopefully insure that President Trump is not re-elected.

I have been told by a friend that the above flyer is from a previous protest and not from the current unrest. Please consider the implications of that.

For further proof that this is political, The Gateway Pundit is reporting today:

At least 13 Joe Biden staffers made donations to a radical leftist group that is raising money for the looters and rioters in Minnesota.

The Minnesota Freedom Fund has raised $20 million in the past week by leftists to bail out violent Antifa and Black Lives Matter activists after they are caught looting and rioting.

Just for the record, black lives do matter, babies lives matter, law and order matters, and respect for other people’s property matters.

On Monday night George Floyd was pronounced dead after he was taken into custody by police in Minneapolis. There is a video of Mr. Floyd being pressed to the ground by a policeman despite Mr. Floyd’s stating that he could not breathe. This is a horrible abuse of power by the policeman and by the other policemen and people standing around watching it happen. So where do we go from here?

The answer is not rioting, looting, and burning down the neighborhood businesses. There is never any excuse for that behavior. Part of the answer is arresting the policeman who had his knee on Mr. Floyd’s neck and the policemen who stood by as Mr. Floyd was murdered. There needs to be a trial. Probably a change of venue for the trial would be in order. The charge needs to be appropriate to the crime–the video is evidence. I don’t know if a murder charge would hold up, but I suspect an involuntary manslaughter charge would.

Most of our policemen are honest, hardworking men and women. It is a shame when a man charged with upholding the law does something this horrible. According to various sources, the policeman involved had other questionable incidents in his record. This should be a wake-up call to all supervisors of policemen to remove any policeman who cannot handle the responsibility of the job without acting in ways that bring disgrace on their profession and create situations where people feel they have the right to riot. People never have the right to riot, but unfortunately some people have been told that they do.

I have waited a few days to say anything about Ferguson and what is happening there, because I wasn’t sure what was going on. I am not sure I have a clear picture yet, but here is what we do know:

A young man was killed while fleeing police. He may have attempted to surrender, but that attempt was well into the incident, and the policeman may have feared for his own safety.

The young man had very recently committed a robbery. We don’t know if the policeman was aware of that.

This may or may not have been excessive force, but how does that give people the right to riot or loot?

This is a tragedy–a young man is dead. It is time for the community to come together–not split apart.

The young man involved was not an angel. Why was he running away from the policeman?

The thing that concerns me about this incident is the way the community reacted. Protests are fine–looting is not. Looting simply creates more problems. Why did the looters attack local stores (businessmen trying to make a living)? This is mob rule, and it has no reason to it. Mob rule is a danger to our cities, towns and country. Why did violence follow the initial event? Who was stirring the waters rather than calming them down? The shooting was a tragedy for the young man’s family. It did not have to result in the destruction of the town.