Yesterday The Epoch Times reported that Senator Robert Menendez (D-N.J.) blocked a resolution that condemns “mob violence.” That sounds like a common sense resolution that should easily pass the Senate, but it was blocked.

Lee (Senator Mike Lee (R-Utah) ) took to the Senate floor in Washington Thursday to announce his belief that it was important for the Senate to go on record “condemning the rising tide of mob violence we see across the country and the increasingly prevalent mob mentality that’s fueling it.”

Lee cited several recent instances, including the shooting by a protester in Utah, the assault of a Wisconsin state senator by a group that tore down two statues, and the berating of law enforcement officers for standing at their posts.

While some Americans have organized peaceful protests, other events have devolved into rioting, looting, and violence, Lee noted.

Menendez said he objected, arguing that the resolution made no mention “of America’s original sin, which is slavery.”

Many New Jersey residents don’t believe the United States is morally committed to justice, he argued, which would clash with the third paragraph of the resolution. That paragraph states: “The United States is a diverse nation committed to cultivating respect, friendship, and justice across all such differences, and protecting the God-given equal rights of all Americans under the law.”

“I would consider not objecting to the senator’s request if he also recognized and added to his resolution the fact that we have a president of the United States who ultimately provokes—provokes insightful language and violence,” Menendez added, noting that President Donald Trump recently shared a video that included a man saying “white power.”

Lee was willing to accept the proposed revisions except for the part about Trump, saying lawmakers shouldn’t point to one specific individual.

So Senator Menendez was not willing to condemn violence unless the resolution specifically attacked President Trump. Wow. It’s interesting that the Senator blames President Trump for provoking the violence when the violence is generally committed by people who oppose him. That’s like accusing France of starting World War II because they responded when Germany attacked them. Every rioter is responsible for his/her own actions. They can blame no one but themselves. When they are arrested, they will be held responsible. How dumb does Senator Menendez think the American people are?

The Gateway Pundit posted an article today that includes a copy of a letter sent by Democrat Congressmen to the Prosecutor General of the Ukraine written on May 4, 2018.

This is the letter: 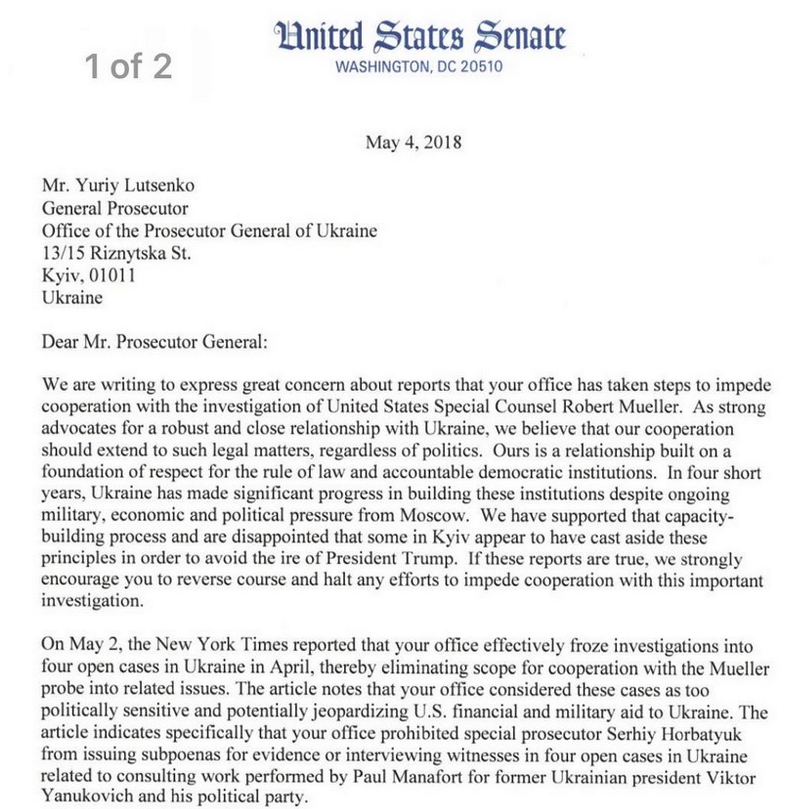 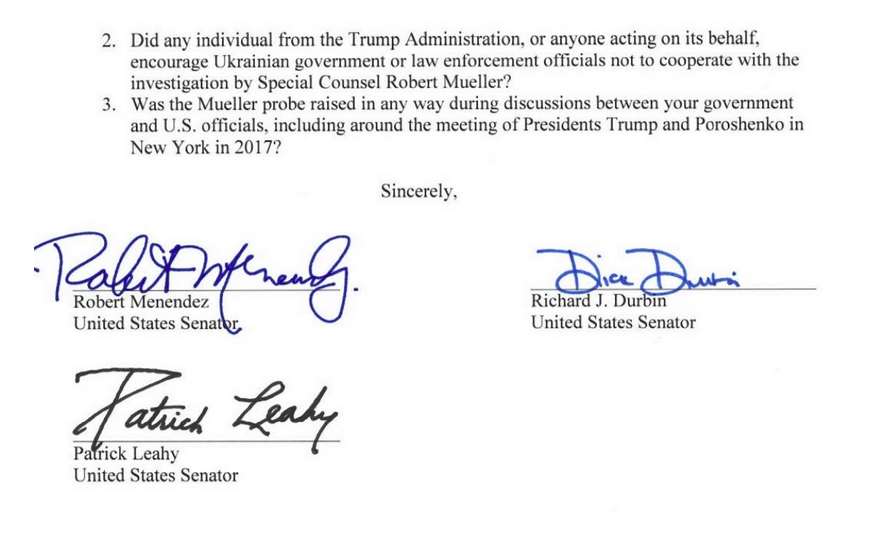 So why is this okay when Democrats in Congress do this, but not okay when a Republican President does this?

Republican Sen. Lindsey Graham (S.C.) said on Friday that if the allegations against Alabama candidate for U.S. Senate Roy Moore are true, he should step aside, and “should be dealt with severely.”

But Graham not only hasn’t called for Democrat Sen. Bob Menendez (N.J.), accused of having sex with underage prostitutes, to step aside — he also went to New Jersey on his own dime two weeks ago to testify as a character witness in Menendez’s corruption trial, telling the judge that Menendez is “very honest” and “honorable.”

I’m just going to leave this here for your consideration.

Fox News is reporting today that emails obtained by Citizens United as part of its ongoing Freedom of Information Act request to the State Department show collusion between Hillary Clinton and the Democrats of the Senate Committee that was investigating Benghazi.

This is a screen shot of the emails (taken from the Fox News article): 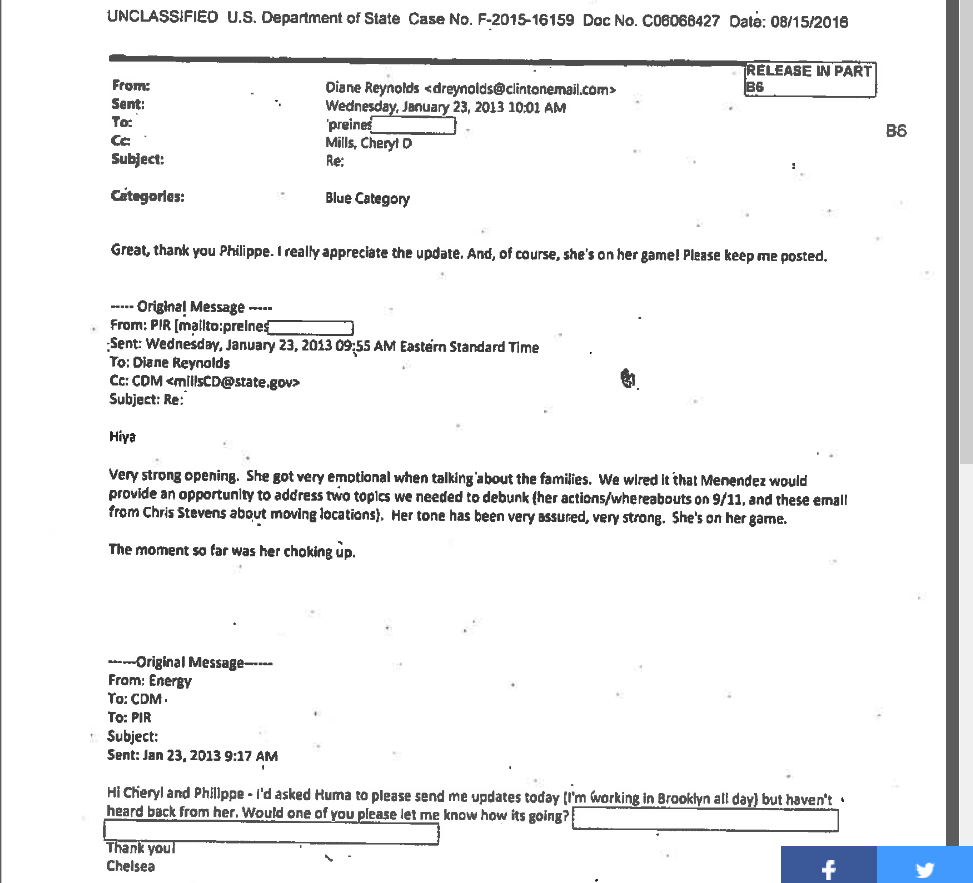 So Senator Menendez was not interested in finding out what actually happened at Behghazi–he was interested in advancing Hillary’s political ambitions. I know there were people on that committee that cared about the truth, but they were blocked by committee members that were playing politics.

The emails were obtained by the group Citizens United as part of its ongoing Freedom of Information Act request to the State Department for emails from Chelsea Clinton and Hillary Clinton’s closest aides.

“This email chain provides a rare behind the scenes look at which Benghazi-related issues the Clinton camp had concerns about going into Secretary Clinton’s January 2013 testimony on Capitol Hill, and what they had apparently plotted out beforehand with a Democrat committee member to deal with those concerns,” Citizens United said in a statement. “Citizens United will continue to release all new Benghazi emails we receive through our FOIA lawsuits as they come in — the American people have a right to know the full picture.”

Fox News asked the Clinton campaign as well as Menendez’s office if they coordinated before the 2013 Senate Foreign Relations Committee hearing; what was meant by the term “wired;” and how the email exchange was consistent with the principle of independent congressional oversight. There was no immediate response from either.

In 2013, the New Jersey senator — who is now facing federal public corruption charges — at the time of the hearing was about to become chairman of the Senate Foreign Relations Committee, replacing John Kerry who was in line to replace Hillary Clinton as secretary of state. Menendez has denied any wrongdoing.

Washington no longer represents the interests of Americans. It is time to clean house.