Yesterday Frontpage Magazine posted an article about a recent vote in the House of Representatives.

As old Joe Biden would say, Look, Fat, look, here’s the deal: I’ve been warning for years that it would sooner or later become “Islamophobic” to offer even the mildest opposition to jihad violence, and that the “Islamophobia” mongers would become increasingly open about their support for jihad terrorists, and here we are. On Thursday, 174 Democrats in the House of Representatives voted against an amendment to the Rights for Transportation Security Officers Act that would prevent the Transportation Security Administration (TSA) from hiring convicted terrorists.

Yes, you read that right: if these House Democrats had gotten their way, on your next flight, you could have gotten a pat-down from a TSA agent who previously conspired to down the airplane you were planning to fly on. House Minority Leader Kevin McCarthy (R., Calif.) explained that the amendment “was pulled back by leadership because the socialist wing of the party did not want to have that amendment go forward on this bill. When it was offered, overwhelmingly the majority of the House would like to see the TSA not hire terrorists or those who have been convicted of sexual misconduct with minors and others. But the socialist wing of the party, that controls now the Democratic Party, said that that could not be offered.”

Are their memories so short that they do not remember an article in the Tampa Bay Times on September 19, 2019, which reported:

…Prosecutors also said Alani allowed the FBI to search his smart phone and agents found a “disturbing” Islamic State video in which a person was being shot in the head, and that he sent the video to someone with an Arabic message asking “Allah” to take revenge against non-Muslims. In addition, they said Alani sent $700 to someone in Iraq, where he was born and has family.

The article at Frontpage Magazine concludes:

The outcome of years of this propaganda pounded into the American people without any respite or pause, while establishment Republicans jumped on the bandwagon and echoed the same rhetoric, was inevitable: now even an agency that was established in order to protect Americans from jihad terrorists must, in the view of a majority of House Democrats, hire the very people it was created to stop in order to avoid falling into the “racism” that the miseducated hordes who vote Democrat see behind almost everything. It has been clear where all this has been tending for years. Now it is even clearer.

Will these outrageously anti-American Democrats be voted out of office in November? No, that would require a thoughtful Democratic voter base and a responsible establishment media. Unfortunately, those ships have long since sailed.

Are we willing to put Americans at risk in the name of political correctness?

Yesterday John HInderaker at Power Line Blog posted an article about the latest reason given to impeach President Trump.

The article quotes the wisdom of Congressman Al Green:

Rep. Al Green (D-TX) said on Saturday during an interview on MSNBC that President Donald Trump needed to be impeached “to deal with slavery.”

Green, who has previously stated that Trump must be impeached or else “he will get reelected,” said this week that there is “no limit” to the number of times that Democrats can try to impeach the president.

…So, I appreciate whatever we will do, but until we deal with the issue of invidious discrimination as a relates to [the] LGBTQ community, the anti-Semitism, the racism, the Islamophobia, the transphobia, and also the misogyny that he has exemplified, I don’t think our work is done.

As you can see, most of the often repeated charges against President Trump contradict actual facts. Joseph Goebbels is often credited with saying,  “If you tell a lie big enough and keep repeating it, people will eventually come to believe it.” Unfortunately we are seeing that principle in action regarding reporting on President Trump.

Does anyone actually believe this? 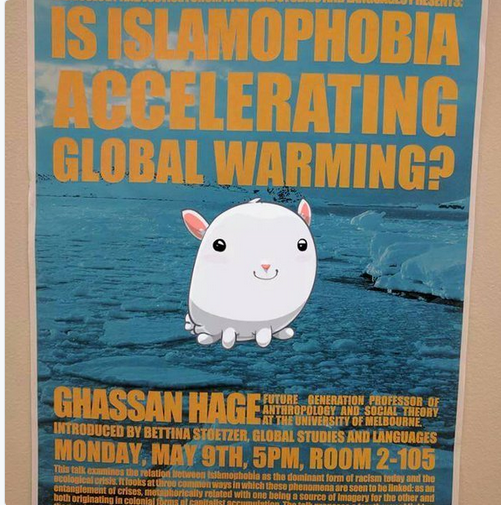 The Foundry at Heritage.org posted a story yesterday (with a video) about the efforts of the Council on American-Islamic Relations (CAIR) to block the showing of the movie “Honor Diaries” from being shown on college campuses.

Kelly last night questioned CAIR Chicago representative Agnieszka Karoluk on “The Kelly File” about the group’s opposition to “Honor Diaries,”  a documentary that addresses abuses  such as female genital mutilation, forced marriages, and the oppression of women in Muslim society – what one commentator in the film calls “systematic, institutionalized misogyny.”

Karoluk, herself a Muslim woman, said that although CAIR  doesn’t oppose raising awareness, the source of funding for the film, the Clarion Project, is “Islamophobic.”  The film’s backers, she said, “use it to promote their own hate-filled agenda.”

…Kelly also spoke Monday night about the film. The documentary, she reported, features “a diverse group of women with different faiths, backgrounds, and nationalities, all of them focused on promoting women’s rights, especially in countries where women and girls are often subjected to something known as honor violence.”

Yesterday CNS News reported that the Iran‘s Foreign Ministry has warned Iranians traveling in Canada to be alert to danger.

“Foreign Ministry said in a statement that based on current evidences, Islamphobia and Iranphobia have not stopped in Canada, rather escalated over the past few days,” reads a report from the state-run Islamic Republic News Agency (IRNA), which also quoted the ministry as stating,  “Such a trend has influenced behavior of the governmental and non-governmental authorities in the country.”

The “Canadian government’s double-standard about human rights has been the focus of the world and Canadian public opinion,” said the Foreign Ministry.

Last month the Canadian government issued a statement warning Canadians not to travel to Iran. The educated guess is that this statement from Iran is a response to that statement.

The unfortunate part of this is that many people in Iran who do not have access to foreign media will believe this nonsense. I understand that presidential primaries can be nasty, but sometimes things get totally out of hand. Recent events in Texas show how our political system can be manipulated to the detriment of our national security.

CBN News is reporting today that Mohammed Elibiary, an advisor to the Department of Homeland Security, was given access to sensitive government documents. Mr. Elibiary then leaked some of those documents to the media. Supposedly, his goal was to defeat the presidential campaign of Texas Governor Rick Perry by accusing him of “Islamophobia.”

Out of 26 members on the Department of Homeland Security’s Advisory Council, only Elibiary was granted access to a nationwide database that includes terror watch lists and sensitive FBI reports.

Mr. Elibiary is not an obvious candidate to be working with the Department of Homeland Security. The article reports:

In 2004, he spoke at a Texas conference honoring Iran’s notorious Ayatollah Khomeini as a “great Islamic visionary.”

He’s written in praise of one of the most influential Islamic radicals of the modern era: former Muslim Brotherhood leader Sayyid Qutb.

And he has spoken out against the prosecution of Hamas fundraisers in the U.S.

In a disturbing 2006 email exchange with a Dallas Morning News editor, Elibiary wrote: “Treat people as inferiors and you can expect someone to put a banana in your exhaust pipe or something.”

This really does not fit my definition of a ‘moderate’ Muslim. The good news here is that Mr. Elibiary’s access to the database of the Department of Homeland Security has reportedly been revoked.