On Monday The Washington Examiner posted an article about race relations in America. We still have those who are trying to profit or gain personally by creating racial discord, but generally speaking America is doing better.

Satisfaction with race relations in the United States has jumped under President Trump, the latest indication that the Republican is making significant inroads with blacks and other minorities in advance of the 2020 presidential election.

New details from a Gallup survey on satisfaction said race relations and the “position” of minorities under Trump are far higher than they were under President Barack Obama, the nation’s first black president.

Race relations scored the highest satisfaction advance, 14 points, from 22% at the end of the Obama administration to 36% this month, said Gallup.

These statistics may explain why the Democrats were willing to embark on the seemingly suicidal mission of impeachment.

What’s more, Gallup said that the nation’s average satisfaction rate is at a 15-year high.

“Americans’ average satisfaction rating for the 27 issues Gallup has tracked consistently since 2001 is now 47%. This is up three points from a year ago and is the highest since the January 2005 poll.

“Today’s average satisfaction is roughly on par with the level of the early 2000s. Only in 2002 was the average for this metric substantially higher than it is today. The average 53% recorded that year reflected heightened satisfaction as Americans were in full ‘rally around the flag’ mode shortly after the 9/11 attacks.”

President Trump has been a very successful President. It is a shame that most of the mainstream media has chosen to ignore that fact.

When President Trump campaigned for President, he said he wanted to redo America’s trade deals and bring manufacturing back to America. He has renegotiated the trade deals. Congress has yet to approve the deal with Mexico and Canada, but a lot of manufacturing has returned to America. The Washington Times posted an article today about public opinion of President Trump’s trade policies.

“Bipartisan consensus has emerged that foreign trade is good,” wrote Gallup senior analyst Lydia Saad. “Americans’ broad view of trade is the most positive it has been in more than a quarter-century.

…“Both Republicans and Democrats have become more positive about trade over this period of improving economic conditions,” she noted. “However, support for trade among both groups jumped sharply after Trump took office in 2017.”

• 70% of Americans say trade with other nations has a positive effect on “innovation and development of new products.”

• 63% say trade has a positive effect on American businesses,

• 58% say trade has a positive effect of the quality of products.

I wonder if the positive results of President Trump’s policies will be reflected in the 2020 election.

Yesterday Issues and Insights posted an article about ObamaCare 10 years out.

Based on polling data, Obamacare has been a miserable failure, and Obama will be far from the last president to grapple with this issue.

The most recent Wall Street Journal/NBC News poll finds that health care is at the top of the nation’s priority list, with 24 percent of respondents listing it as their top priority for the federal government. Next on the list is immigration, at 18 percent, and after that, economic growth at 14 percent.

The poll also found that 42 percent list health care as either their first or second choice on the priority list.

Back in June 2008, when Obama was running for president, only 8 percent rated health care as a top priority, just 20 percent as their first or second priority. Of course, the economy was in a recession and the country at war with Iraq, both of which weighed heavily on the public’s mind at the time.

But even in earlier years when the economy was doing well, health care ranked far lower on the list of priorities than it does today. In June 2006, only 14 percent ranked it as No. 1 on their list. A year later, 15 percent said it was their top priority.

The public has not been impressed with ObamaCare:

An ongoing Gallup survey finds that the public was actually more satisfied with their own coverage and quality of health care in 2007 than they were in 2018. Other surveys find cost remains a major complaint.

The article lists a few problems with ObamaCare:

It has done nothing to slow, much less reverse, the rising cost of health care. In fact, Obamacare itself caused premiums in the individual market to more than double in its first four years.

Far from driving the deficit down, Obamacare is pushing federal red ink up. The Congressional Budget Office has calculated that repealing Obamacare would cut the deficit by some $473 billion in the first 10 years.

Rather than admit failure, the Democrats simply want to throw more money at it.

Naturally, because of these failures, the Democrats’ answer is to dump even more taxpayer money into government-run health care programs, with most now favoring a $32 trillion plan developed by socialist Bernie Sanders to have the government nationalize the entire health insurance industry.

Only in government, and only among fans of big government, are massive failures like Obamacare rewarded with still more government.

The Democrats have taken a stand in support of late-term abortion. A recent survey shows that most Americans opposed this practice. Why do the Democrats support it?

The Washington Free Beacon posted an article yesterday that stated the following:

The Democratic Party’s leading presidential contenders are silent on data showing an overwhelming majority of voters oppose their stance on abortion.

A poll released by Susan B. Anthony List on Wednesday found that 77 percent of likely general election voters favor legislation protecting children born through failed abortions and 62 percent oppose efforts to expand late-term abortions. The results closely mirror those previously recorded by Gallup showing only 28 percent of Americans think abortion should be legal during the second trimester and only 13 percent support it during the third trimester.

Despite these numbers, the Democratic presidential contenders continue to support the Women’s Health Protection Act. If implemented, the bill would invalidate any laws that “single out abortion providers with medically unnecessary requirements and restrictions, do not promote women’s health or safety, and limit access to abortion services,” according to the liberal Center for Reproductive Rights. Effectively it would strike down prohibitions on abortion after 20 weeks, regulations protecting individuals or institutions from being forced to perform abortions, and laws preventing abortion on the basis of sex, among others.

“I don’t think they’ve seen the poll numbers,” Kristen Day, the executive director of the Democrats for Life of America, told the Free Beacon. “They look at the poll numbers which Planned Parenthood and NARAL give to them, which say that most Americans don’t want Roe v. Wade to be overturned. But that isn’t the truth about abortion and what people’s opinions are on abortion.”

Day urged for both pro-life and pro-choice Democrats to “speak out more” against late-term abortions. She added the caveat, however, that was often easier said than done.

Newsbusters posted an article today analyzing how the major media covers President Trump. As I am sure almost everyone is aware, the coverage is almost always negative. I strongly suggest that you follow the link and read the entire article–the statistics are amazing. 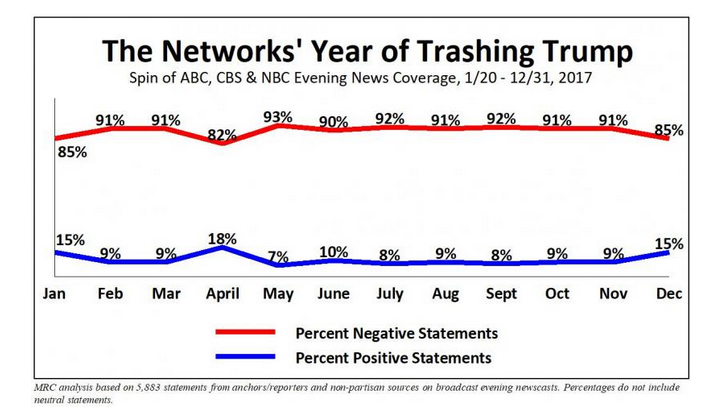 The conclusions of the article are somewhat frightening:

The media reaction to Trump’s first year has been so extreme, the public itself has become polarized over the coverage. In September, Gallup discovered that record numbers of Democrats are reporting “trust and confidence in the mass media to report the news ‘fully, accurately and fairly,’” with 72 percent of Democrats saying they trusted the press in 2017, compared to just 51 percent who said that a year ago.

A month later, a Politico/Morning Consult poll found that “more than three-quarters of Republican voters, 76 percent, think the news media invent stories about Trump and his administration.” That number swells to 85 percent when just Trump supporters are asked the question.

What seems to be happening is that many in the media, including the broadcast networks, have chosen to morph into anti-Trump activists. As a result, they provide massive attention to stories that they think make him look bad, give little airtime to more positive aspects of his administration, and punish him with massively negative spin.

The polls suggest anti-Trump Democrats love that kind of news, pro-Trump Republicans hate it — while the national media are cementing their reputation as biased partisans. Their hostility against the White House is now so obvious, nobody could possibly take them seriously if they ever again claim to be fair and non-partisan professionals.

When politicians (or the media) complain about the divisiveness in America, they need look no further than themselves. The lies that the media is telling and the things that the media is choosing to emphasize are not helping inform the public and they are surely not helping to unite us in the common goal of making America a better place.

Breitbart.com reported today that the the unemployment numbers reported by the Gallop polling organization jumped from 7.7% on July 21 to 8.9% today.

At the end of July, the BLS showed a 7.4% unemployment rate, compared to Gallup‘s 7.8%. Again, a difference not worthy of note. But Gallup’s upward trend to almost 9% in just the last three weeks is alarming, especially because this is not a poll with a history of wild swings due to statistical anomalies. Gallup’s sample size is a massive 30,000 adults and the rolling average is taken over a full 30 day period.

Gallup also shows an alarming increase in the number of underemployed (those with some work seeking more). During the same 30-day period, that number has jumped from 17.1% to 17.9%.

It will be interesting to see how this lines up with the numbers that will be released shortly.

Remember the words “If you like your health care plan, you can keep it.” Well, it hasn’t exactly worked out that way. Obamacare is not yet fully in effect, and yet it is already having a major negative impact on the average working American’s health insurance.

This is not a good thing. The article further reports:

Rather, the CBO had predicted that Obamacare would increase the number of people with employer-sponsored insurance by now.  It had predicted that, under Obamacare, 6 million more Americans would have employer-sponsored insurance in 2011 than in 2010 (see table 4, which shows the CBO’s projected increase of 3 million under (pre-Obamacare) current law and an additional 3 million under Obamacare). So the CBO’s rosy projections for Obamacare (and even these paint a frightening picture) are already proving false.

This is one of many problems with Obamacare. I reported on September 23 (rightwinggranny) that the Community Living Assistance Services and Supports (CLASS) Act portion of Obamacare has been abandoned because its cost would spiral out of control. Unfortunately, the CLASS portion of Obamacare was the part that was supposed to make Obamacare reduce the deficit in its early years (that was done by forcing people who wanted to participate in the CLASS program to contribute to it for a number of years before actually receiving benefits). Eventually, those initial contributions would be used up and the expenses of the program would quickly spiral out of control.

How many promises does Obamacare have to break before it is repealed?