Yesterday Newsbusters posted an article about something the media was concerned about that was mentioned at the Republican National Convention. Ivanka Trump related a story about her son building the White House out of Legos. The article features a number of tweets that illustrate how insane the American media has become.

Here are a few of the tweets: 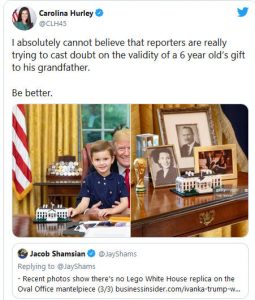 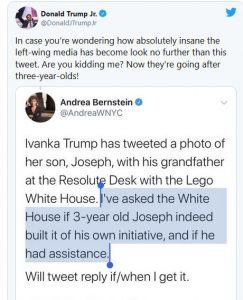 There are riots in the streets. Why are you wondering about a child’s Legos. This is a new dimension of Trump Derangement Syndrome. It does illustrate that there wasn’t much to criticize about the Republican Convention if this is all they can find.

Yesterday Hot Air posted an article about Melania Trump’s renovations to the Rose Garden. One might think that we could at least agree on a renovation to something that is more than fifty years old. I guess not.

Granted, I’m no gardening expert but I think the rose garden looks nice. Last month Melania announced that she was taking on the project. The renovations were long overdue, as it turns out, because of drainage problems and inaccessibility to disabled people. By adding technical updates, future presidents will be able to better use the space to broadcast events and presidential addresses.

I thought we were all in favor of making areas more accessible to disabled people. I would also like to note that the renovations were paid for by private donations–taxpayer money was not used.

The flowers in the garden are largely pastels, which are favored by the first lady, including taller white roses, which were in honor of the first papal visit to the White House by Pope John Paul II in 1979. A diamond-like shape of boxwoods was also added, while about a dozen crabapple trees were removed and will be replanted elsewhere on the grounds.

Moreover, a seating area on the east side of the garden — used at times by presidents for lunch and other meetings — has been removed and will be replaced by a yet-to-be-announced art installation.

The most visually striking change to the garden was the addition of a 3-foot-wide limestone walking path bordering the central lawn. Less noticeable changes include improved drainage and infrastructure and making the garden more accessible for people with disabilities. Audiovisual, broadcasting and other technical fixes are part of the plan, too.

“Protecting the historic integrity of the White House landscape is a considerable responsibility, and we will fulfill our duty as custodians of the public trust,” Melania Trump wrote in a report released when the renovations were announced.

Please note that the crabapple trees will be replanted on the White House grounds.

The criticism falls a bit flat when you understand the need to fix the drainage and the accessibility of the Rose Garden, but I guess Trump Derangement Syndrome also applies to Melania Trump. That’s sad.