According to the Los Angeles Times (in an article posted January 21st):

The Biden administration announced Thursday the suspension of new oil and gas leasing and drilling permits for U.S. lands and waters, effective for 60 days, as officials moved quickly to reverse Trump administration policies on energy and the environment.

That ruling resulted in the following letter written by Luke Duncan, Chairman of the Ute Indian Tribe Business Committee, to the Acting Secretary of the Interior, Scott de la Vega (posted at Breitbart January 24th) 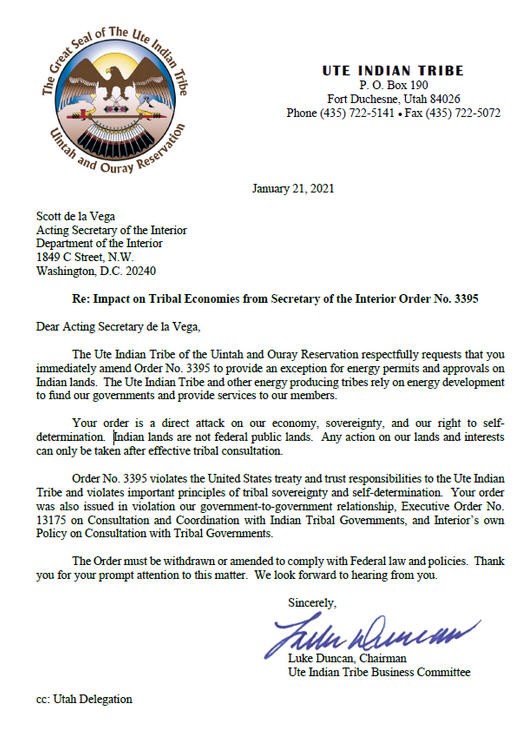 The article at Breitbart quotes a Washington Times article:

The Ute Indian Tribe of the Uintah and Ouray Reservation, which has run an oil-and-gas operation on its 4.5 million-acre reservation for more than 70 years, requested Thursday an exemption for tribal lands from the Interior Department order that halts agencies from issuing permits and leases on mineral production for 60 days.

Duncan called the order “a direct attack on our economy, sovereignty, and our right to self-determination,” adding, “Indian lands are not federal public lands. Any action on our lands and interests can only be taken after effective tribal consultation.”

According to the tribe’s website, mining oil and natural gas is “big business on the reservation.”

The Ute Indian reservation is obviously much smaller than it originally was. The government took a large portion of their land. Now we are adding insult to injury by preventing a group of people engaged in legal, profitable economic activity from making a living and being self-supporting. I am not sure this is really the direction we should be headed. Stay tuned.

One America News reported yesterday that The Chinese Communist Party (CCP) is spending millions on ad space to spread pro-China messages across the United States.

The U.S. Department of Justice reported that in just the last four years, Beijing has spent nearly $19 million in an attempt to push pro-China narratives within the country.

The payments have been on behalf of Beijing-controlled China Daily newspaper, which is an English language publication produced by the CCP that has paid millions of dollars just this year.

Publications like the Wall Street Journal, New York Times and Los Angeles Times have received these payments for running pro-China ads on their websites and printed publication. The paid advertisements are designed to look like real news articles, while often containing a pro-Beijing twist on contemporary news events.

Please understand what is happening here–the mainstream media such as the Wall Street Journal and The New York Times have been losing money because they have become so biased. The Chinese advertising revenue is one of the things keeping them afloat. The fact that some of these ads are designed to look like real news articles is an indication of the goal–subvert any American policy that is unfriendly to China. This is probably one of many reasons the mainstream media does not support the trade policies of President Trump that leveled the playing field with China. 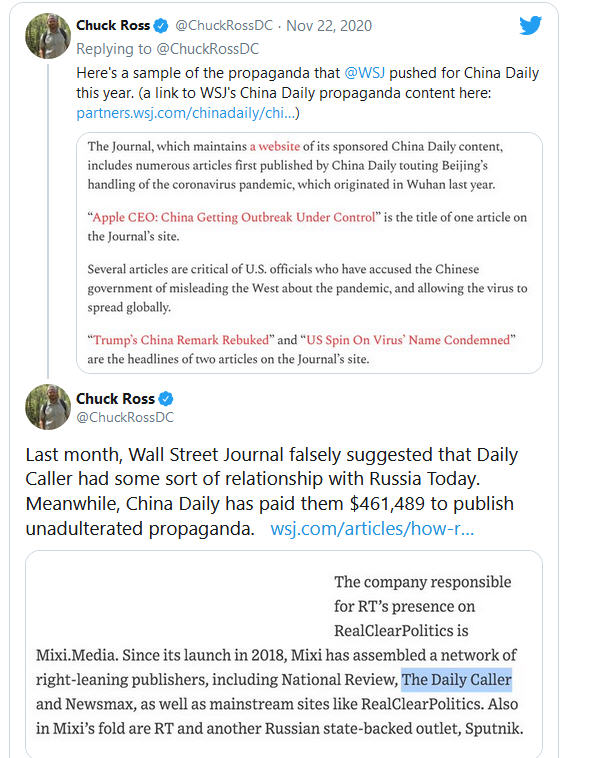 This is one of many reasons Americans should not trust the mainstream media.