Yesterday the Supreme Court ruled to uphold the DACA (Deferred Action for Childhood Arrivals) program. It’s interesting that they chose to uphold the program when President Obama, the author of the program, admitted various times that the program was illegal.

Yesterday PJ Media posted a list of the ten times President Obama declared that his creation of DACA was illegal. Please follow the link to the article for the details, but here is the basic list:

So a President who swore an oath to uphold the Constitution passed a law (a violation of the separation of powers) and now the Supreme Court is not willing to undo that law. That is another reason Americans think Washington has lost its way.

The Western Journal posted a screenshot of a tweet by The Daily Caller summarizing what Justice Thomas said in the dissent: 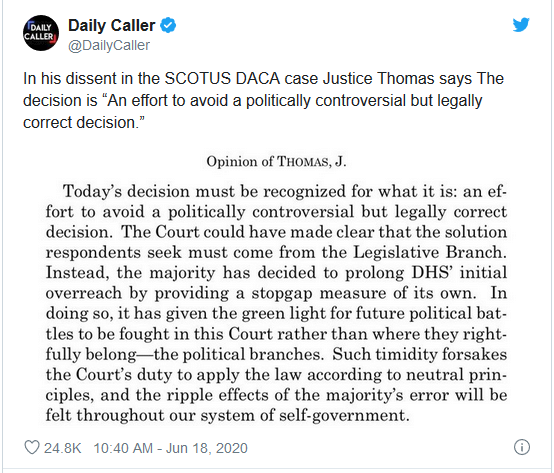 As usual, Justice Thomas got it right.

Yesterday The Washington Examiner reported that the Supreme Court has agreed to take up a dispute over the constitutionality of the Consumer Financial Protection Bureau in a case that could dramatically scale back the agency’s authority to police financial markets or eliminate it altogether. The Consumer Financial Protection Bureau (CFPB), considered to be the brainchild of Senator Elizabeth Warren, was created in 2010. It was one of a few misdirected responses to the housing bubble that burst in 2008.

Just for the record, I want to review a few facts about the financial collapse of 2008 that the mainstream media somehow missed.

The following video was posted at YouTube in September 2008. The video was essentially a campaign ad, but the information in it is important. The CFPB never addressed the actual problem. (For that matter, neither did Dodd-Frank). The video below tells a story you might not be familiar with:

The court said Friday it will hear a challenge from a California-based law firm that argues the CFPB, the brainchild of Sen. Elizabeth Warren, a Massachusetts Democrat, is unconstitutionally structured.

Opponents of the CFPB, created in 2010, argue that its structure violates the separation of powers, as Congress gave it broad authority to regulate mortgages, credit cards, and other consumer products, and is helmed by a single director who can’t be removed by the president except for cause.

The court said it will also address whether the entirety of the law that created the CFPB, the Dodd-Frank Wall Street Reform and Consumer Protection Act that re-ordered the financial regulatory system, should be struck down.

The Trump administration said in a filing with the Supreme Court it concluded the “statutory restriction on the president’s authority to remove the director violates” the Constitution, and “the director of the bureau has since reached the same conclusion.”

Congress set up the CFPB as part of the Dodd-Frank financial reform package, and its director is appointed by the president and confirmed by the Senate. The director serves a term of five years.

Cases challenging the constitutionality of the agency have been weaving their way through the lower courts. In 2016, Justice Brett Kavanaugh, then a judge on the U.S. Court of Appeals for the District of Columbia Circuit, said in a ruling in a similar case the CFPB is a “gross departure from settled historical practice.”

Stay tuned. A decision is expected by the end of June.

The Washington Examiner posted an article today about a statement made by Senator Claire McCaskill, D-Mo., during a Thursday appearance on MSNBC‘s “Morning Joe.”

Senator McCaskill stated, “Part of the problem is that our framers were a little maniacal in that if you look at other democracies around the world, when one party wins the congressional branch, they take the executive branch. Not in our country.”

The Senator might want to take a look at the statement of James Madison in Federalist Papers, No. 47, p. 301. He states, “The accumulation of all power, legislative, executive, and judiciary, in the same hands, whether of one, a few, or many, and whether hereditary, self-appointed, or elective, may justly be pronounced the very definition of tryanny.” The separation of powers did not mean that the branches always had to work together, the separation was to provide checks and balances on each branch from the other branches. It wasn’t maniacal–it was brilliant in its understanding of human nature.

The senator, who has endorsed fellow Democrat Hillary Clinton for president, said that if “Donald Trump would bother to read the Constitution he would understand that that means there is a special obligation to try to unite.”

“Hey listen, I think the Founding Fathers were geniuses. And that’s why I’m somebody who likes to preach the gospel of compromise. That’s what they wanted. They wanted us to compromise.”

They didn’t want us to compromise–they wanted us to follow the Constitution and limit the power of government. We have not done a very good job of either!

Yesterday Daniel Horowitz posted an article at the Conservative Review listing the 10 lies in President Obama’s speech on Thursday night. It seems that President Obama is not telling Americans the truth about his executive action or what its impact will be. I am posting the list, but please follow the link above to see the explanation for each item.

Lie #1: Every President has Taken Executive Action on Immigration

Lie #2: Illegal Immigrant Crossings are Down

Lie #3: It does not grant citizenship or the right to stay here permanently

Lie #7: They have to pay taxes to stay

Lie #9: Cracking Down on Illegal Immigration at the Border

Lie #10: Scripture tells us, we shall not oppress a stranger

In detailing the lies, the author mentions that since the people receiving amnesty are generally low-income workers, saying they will pay their taxes simply means they will collect money from the government under the ‘earned income credit.’ I also appreciated the author’s clarity on Lie #10.

Aside from what President Obama just did to the U.S. Constitution, he just created more unemployment and more government spending. I hope Congress has the backbone to defund or stop this program in some way.

A Senator from Massachusetts made an insightful statements about the future of our nation. That Senator was Daniel Webster.

“There is no nation on earth powerful enough to accomplish our overthrow. Our destruction, should it come at all, will be from the inattention of the people to the concerns of their government.”

Holly Robichaud posted an article in today’s Boston Herald illustrating the wisdom of that statement. She lists the ways you could destroy America from within:

The first step would be to jeopardize the country’s financial stability. Increasing the national debt by $7 trillion is a good starting point, and letting the debt keep growing until it overtakes the country’s gross national product is the death knell.

Another way to unbalance our finances is to encourage everyone to become dependent on government handouts instead of being self- sufficient. When takers outnumber taxpayers, the system will collapse.

The second step would be to destroy U.S. credibility abroad. Spying on our friends doesn’t help our relationships.

…Another step would be to toss out our governing principles. Ignoring our Constitution along with the two other equal branches of government destabilizes the fabric of our society. Changing laws by executive fiat rather than the legislative process undermines our democracy. Our Founding Fathers wrote the Constitution so no one person could dictate. The document empowers the branches of government so there are checks and balances. Without them, we become a dictatorship.

Lastly, you would neglect one of the basic principles: protect the people. Thomas Jefferson said, “A nation without borders is no nation.” Allowing people from other countries to hop, skip and jump over the border is a nonviolent invasion.

The obvious conclusion is that our destruction is happening as America watches television and tunes out politics. Unless the American voter wakes up and begins to pay attention and get involved, we will see Senator Webster’s prediction come true.

The Hill is reporting today that President Obama’s plan to combat climate change does not include any action by Congress.

The basic premise of the need to combat climate change is not valid. WattsUpWithThat.com posted the following graph on its website. The graph is from NOAA (National Oceanic and Atmospheric Administration): 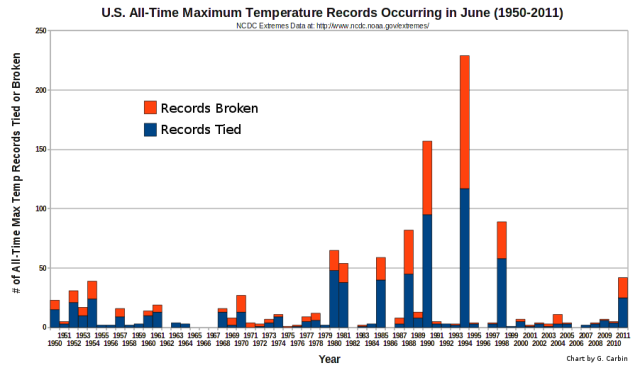 So why is the President making a speech about climate change today? He is hoping to take the focus off of the IRS, Benghazi, and the other scandals that have plagued his administration. President Obama does not seem to understand the concept of working with Congress to reach a compromise on proposed legislation. Hopefully, we will still have three viable branches of government by the time the Obama Administration is over.

Please follow the links above to The Hill and WattsUpWithThat to read further details of the President’s proposals.

Some recent observations about thumbs. I was recently forced to realize the usefulness of thumbs due to some surgery on my thumb. The surgery was on my left hand; and as I am right-handed, I didn’t think it would be any big deal. The surgery went well and my thumb is healing nicely. In that sense, it was no big deal. Now for the educational part of the experience.

People are born with two opposing thumbs. They don’t seem too important–after all, there are eight other fingers. However, there are some things that thumbs are very useful for–opening jars, buttoning buttons, tying shoelaces, etc. You get the picture. Thumbs (opposing thumbs) are useful.

When America was founded, three branches of government were established–the Executive, the Judiciary, and the Legislature. The idea was that if one branch overreached its power, the other two would bring balance to whatever was happening. This was a really good plan, and it generally works. It means that Congress controls the debt ceiling so that there is some control over the amount of money the President can spend. It means that the President can veto a law that he feels is not good for the country and that law will not go into effect unless the Congress overrides his veto by a two-thirds margin. It means that the courts can rule when the other branches of government overstep their bounds. Just as opposing thumbs help us do useful tasks, opposing branches of government strive to keep us a representative republic.

Sometime today, take time to be grateful for things that oppose–thumbs, Congressmen and Congresswomen, Judges, and sometimes, Presidents.