Yesterday Just the News reported that on Tuesday night the Democrats passed a gradual $15 minimum wage hike in a committee vote.

The increase from $7.25 an hour was part of the House Education and Labor Committee’s budget reconciliation markup for President Biden’s $1.9 trillion stimulus plan. In the legislation, the minimum wage would reach $15 in 2025.

The language of the Raise the Wage Act was incorporated into the $170 billion COVID-19 stimulus funding legislation for public schools during the virtual committee markup that began late in the afternoon on Tuesday. The vote on the legislation was 27-21 along party lines.

The Democrats admit that the only way to get this through in by the budget reconciliation process:

Senate Budget Committee Chairman Bernie Sanders told reporters on Wednesday that Democrats are including the gradual $15 minimum wage hike in Biden’s stimulus plan because they do not have 60 votes in the Senate to pass it.

“We’re not going to get the 60 votes we need and the only way we’re going to do it with 50 votes is through reconciliation,” he said.

The use of budget reconciliation allows Democrats to pass Biden’s stimulus plan without GOP votes in the Senate.

Has it occurred to the Democrats that if the measure won’t pass it might be because  it is a bad idea?

From the Weekly Standard today: 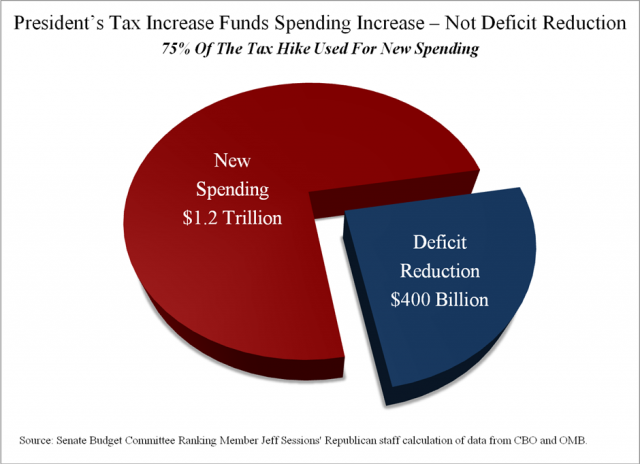 The Senate Budget Committee has stated that $1.2 trillion of the proposed $1.6 trillion in tax hikes would go toward new spending, while only $400 billion would go toward deficit reduction. We don’t need more taxes or more spending–we need to cut both taxes and spending.

John Hinderaker at Power Line reported today on testimony given by Doug Elmendorf, head of the Congressional Budget Office to the Senate Budget Committee. Senator Jeff Sessions reminded Mr. Elmendorf of the CBO’s projection, made around the time the stimulus bill was enacted, that the measure would have a negative long-term impact on economic growth. Elmendorf confirmed that this is still the view of the CBO.

The article at Power Line contains a video of the testimony. So let me get this straight–we spend $800 billion-plus dollars, the unemployment rate is still at 9 percent or more, and the spending will have a long-term negative impact on economic growth. Where do we go to get our money back?