A college education has value. It has more than academic value (assuming the student earned a degree in a subject that is reasonably marketable). College teaches students how to manage their time, how to get along with a roommate, hopefully how to balance a checkbook and manage consumer credit, and many other useful skills that they will take into the world when they graduate. Ideally it also helps students become adults that will function well in society. Well, the following article leads me to wonder about that last sentence.

Yesterday The U.K. Daily Mail posted an article about an Oberlin College student who complained about the people who installed a radiator in his dormitory.

A student at an $80,000-a-year ultra-liberal Oberlin College in Ohio claimed in an op-ed that he was left ‘angry, scared, and confused’ because ‘cisgender men’ installed a radiator in his ‘safe space’ dormitory.

Peter Fray-Witzer, a student enrolled at Oberlin College, posted an article in Friday’s edition of The Oberlin Review in which he takes school administrators to task for giving him short notice about the installation.

Fray-Witzer writes that he asked a campus official if he could be exempt from having a radiator installed in his room so as to avoid the ‘intrusion.’

He also complains that he felt ‘mildly violated’ and ‘a little peeved’ when the contractors returned to his dorm room the next day to ‘check the insulation.’

It is obvious that this young man’s college experience is not preparing him for life in the real world. Is he the exception or the rule?

Many years ago, my husband and I took in a refugee from a communist country and her daughter to live with us until they were able to support themselves. The daughter was enrolled in the local public elementary school. The mother took her to the school to register her and was amazed at what happened next. The principal took the mother and daughter around the school, introduced them to some of the teachers, showed them the cafeteria, etc. The mother commented that in the country she had fled, you dropped your child off at the school and were never allowed inside. Sitting in on your child’s classroom is not an option in communist countries. She was amazed at the freedom of American parents. That was about twenty years ago. In many areas of the country, things have changed drastically.

Yesterday BizPacReview posted an article about a recent tweet from a school teacher at a school in Philadelphia.

Meet Matthew R. Kay, a teacher at Philadelphia’s Science Leadership Academy who’s been accused of trying to indoctrinate his students in left-wing thought.

Kay came to the public’s attention Saturday when he posted viral tweets warning his followers that the virtual classrooms slated for this school season will allow “potential spectators,” including parents, to overhear what their kids are learning.

This, he warned his followers, might present a challenge for their so-called “equity/inclusion work,” i.e., their alleged indoctrination of schoolchildren.

This alleged indoctrination includes discussions that “encourage vulnerability,” address “gender/sexuality” and “destabiliz[e] a kid’s racism or homophobia or transphobia.”

Kay further suggested that he’s always taught his students that “what happens here stays here,” but that virtual classrooms will prevent this.

Mr. Kay, I would like to remind you that parents are supposed to be the ones raising their children–that is not your job. Your job is to teach them the academic skills they need to function successfully in our society. If they learn compassion, empathy, and respect for all people, that is a good thing, but theoretically their parents are supposed to be teaching that–it is not your job.

The article includes a few tweets of people who responded to Mr. Kay’s tweet: 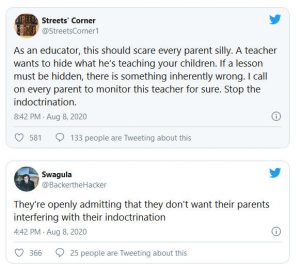 However, not everyone had a problem with Mr. Kay’s idea of excluding parents: 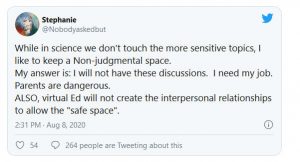 “Parents are dangerous.” Wow. Where have we gone?

Moreover, the fact that Kay and those like him want to hide what’s happening in these so-called “safe spaces” makes it seem as if indoctrination is involved.

The good news is that at least parents are now aware of what’s happening in classrooms across the country. Whether or not they choose to respond by taking some sort of action is up to them.

Two incredibly talented women felt it was necessary to flash their bodies in order to entertain the crowd. What a shame. Their singing and dancing would have been just as entertaining with more clothes and less sexuality. It is a shame that they allowed themselves to be exploited in this way rather than simply insisting on displaying their talent.

Today a website called Faithwire posted an article about the halftime show. The title of the article was, “What I Want My Teenage Daughter to Know After Jennifer Lopez and Shakira’s Stripper-Like Super Bowl Halftime Show.”

Some highlights from the article:

I had to endure this with my teen daughter watching alongside me. Gee, thanks, guys! For a group of people who always trumpet the value of “safe spaces,” they certainly don’t seem to care about the consequences of jamming sexually provocative “performances” into programming that families will be watching.

And I wonder about Shakira and J-Lo. Like, are you seriously at this stage in life and still think it’s honorable or somehow “empowering” to writhe around on stage as if you’re trying to gain the attention of a bunch of frat boys? Sadly, this is nothing new. Culture’s misguided idea that sexuality = empowerment has been around for over a century, ever since the days of Edward Bernays it’s been a staple in the marketing industry. Hopefully, someday we’ll see marketing that reflects a society desiring Godly values. Given the current state of affairs, however, I don’t see that happening anytime soon — so the best we can do in the meantime is use opportunities such as this as teaching moments.

…Flaunting your body is not edgy or cool.

Your body is a temple. God made you and he made you beautiful. He made you in His image. He made you so He could be glorified through you, and there is nothing God-glorifying about dancing nearly naked on a stage for attention. Culture will tell you that expressing your “sexuality” is healthy, and even powerful. God tells us the exact opposite is true. In 1 Corinthians 6:18, we’re told to “flee from sexual immorality.” God says when we sin sexually, it is a sin “against their own body.” So we’re actually harming ourselves, not empowering ourselves when it comes to sexual sin. Appealing to the sexual instincts of man is the cheapest of all ways to get attention, it’s been done a billion times over, it’s degrading, it’s predictable — not edgy or cool.

You are not an object

Until women stand up and refuse to be exploited, we will continue to be exploited. I understand that there is tremendous pressure from the entertainment industry to display  overt sexuality in order to be successful in the industry, but until women as a group stand up against their exploitation, it will continue. These two women are extremely talented and have worked hard to be in the shape they are in, but they didn’t need to cheapen their talent with the antics displayed last night.

Yesterday PJ Media posted a story showing how skewed our education system has become. The story deals with a group of college graduates who were interning at a company. The didn’t like the company’s dress code and drew up a proposal and a  petition to change it.

The next day, all of us who signed the petition were called into a meeting where we thought our proposal would be discussed. Instead, we were informed that due to our “unprofessional” behavior, we were being let go from our internships. We were told to hand in our ID badges and to gather our things and leave the property ASAP.

We were shocked. The proposal was written professionally like examples I have learned about in school, and our arguments were thought out and well-reasoned. We weren’t even given a chance to discuss it. The worst part is that just before the meeting ended, one of the managers told us that the worker who was allowed to disobey the dress code was a former soldier who lost her leg and was therefore given permission to wear whatever kind of shoes she could walk in. You can’t even tell, and if we had known about this we would have factored it into our argument.

They just don’t get it–their argument was not the problem–their actions were.

The reality is that colleges — the educational institutions that are theoretically supposed to prepare these kids for the real world — did these students a disservice by treating every petition or pet cause as valid, allowing the inmates to run the asylum. When the students hit the real world, WHAM!