Rick Grenell definitely left his mark as acting Director of National Intelligence. Things that should never have been classified were unclassified so that the American people could see for themselves what their government had been up to. Hopefully, John Ratcliffe, who replaced Ambassador Grenell, will be as equally concerned about unnecessary government secrecy.

Former acting Director of National Intelligence Richard Grenell told “Tucker Carlson Tonight” Monday that his time in the Trump administration has shown him that the great political struggle is no longer between Republicans and Democrats, but between the District of Columbia and the rest of the U.S.

The article includes a screenshot of something Ambassador Grenell tweeted:

“The fact of the matter is,” Grenell said, “we have a real problem in Washington, D.C., because it’s a system that it no longer is Republicans and Democrats pushing against each other to create good policy. It’s a fight between Washington and the rest of America.”

“What we have [is] a system in Washington where people get jobs if you’re there, if you know someone and you work your way up, and it’s like musical chairs from one agency to another,” Grenell added. “There is no outside thought, there’s no outside perspective.”

Grenell, who also spent two years as U.S. ambassador to Germany, characterized Trump as a great disruptor of this insular system.

“He’s breaking their system,” he said. “He doesn’t play by the rules.

“I saw that at ODNI,” Grenell added. “I saw that by entering the intelligence world, and senators from the Democratic Party saying, ‘You have no experience, what are you doing — why should you be there?””

Grenell specifically called out Sen. Mark Warner, D-Va., the top Democrat on the Senate Intelligence Committee, by noting that Grenell had received his first intelligence briefing back in 2001, before Warner was elected to public office.

“He said that I wasn’t qualified,” Grennell said of Warner. “I actually am a receiver of intelligence, and [I’m] an expert on the consumer part of the intelligence and how to utilize it, but that perspective is never brought to Washington.”

Change is hard–particularly if that change means you are losing control of something you have controlled for a very long time. That is the current battle in Washington. Does the bureaucracy want to represent the American people or do they want to represent only their own interests?

Ambassador Rick Grenell did a wonderful job as Acting Director of National Intelligence. He showed himself to be a true patriot in revealing to the American public the misuse of the intelligence apparatus by the previous administration. Sara Carter posted an article yesterday about something he has done that will help further the cause of transparency.

Grenell also criticized Warner’s alleged political move as ‘cherry picking’ documents for political purposes at the expense of national security. Warner is the ranking Democrat on the Senate Intelligence Committee and spoke out against Grenell’s declassification of the senior Obama officials that requested Flynn’s private conversations and unmasking of his name.

“I find it puzzling that your letter initially complains about the declassification of the identities of unmaskers, a declassification that posed no conceivable risks to sources or methods, only to then request the declassification of actual intelligence reports,” said Grenell. “Cherry picking certain documents for release, while attacking the release of others that don’t fit your political narrative, is part of the problem the American people have with Washington DC politicians. I would appreciate it if you would explain your philosophy on transparency as it appears to be based solely on political advantage.”

Grenell had declassified the names of 16 former senior Obama officials involved in requesting Flynn’s private communications 48 times, according to the declassified documents provided by the DNI. Grenell only declassified the requests made between Nov. 30, 2016 and Jan. 12, 2017, according to the documents. The most controversial request was the phone calls between Flynn and former Russian ambassador Sergey Kislyak, who spoke on Dec. 29, 2016. The contents of that classified phone conversation, which was wiretapped by the FBI, would later be leaked to The Washington Post columnist David Ignatius in January.

Despite Warner’s concerns mentioned in his letter last week, the declassification of the Obama officials’ names did not violate any sources or methods, stated intelligence officials.

Please follow the link to the article for further details.

I would like to point out the contrast between what Mark Warner and Adam Schiff have been doing regarding classified information and what Ambassador Grenell has done. Mark Warner and Adam Schiff have been selectively leaking tidbits to their allies in the press for the purpose of making President Trump look bad. Ambassador Grenell is declassifying information to inform the American public about what has actually been going on. Representative Schiff and Senator Warner need to be held accountable for their leaking. If they are not held accountable, we will see more of the same.

The Daily Caller posted an article today about the impact Rick Grenell had as acting Director of National Intelligence (ODNI) in just three months.

There is a detailed list of his accomplishments in the article. Please follow the link to the article for those details. Ambassador Grenell did an outstanding job.

The article lists the three areas of his accomplishments:

In addition to vacating his DNI role, Grenell announced over the weekend he will step down as the United States Ambassador to Germany, a position he served in for two years. During his time at the State Department, he successfully pressured Germany to commit to upping its annual NATO defense funding, called for a full ban of Hezbollah, and blocked the transfer of more than $300 million from German banks to Iran following Trump’s withdrawal from the Joint Comprehensive Plan of Action.

Neither Grenell nor the White House immediately responded to inquiries from the Daily Caller regarding Grenell taking a different position within the administration.

Thank you, sir, for a job well done.

I don’t fault people in Washington for having political beliefs. I do fault them when their political beliefs interfere with their ability to do their job honestly. Unfortunately we saw a lot of that during the Obama administration.

On Sunday, The Gateway Pundit posted a video of an interview of Fred Fleitz, former CIA Analyst and National Security Council Chief of Staff, by Jan Jekielek at American Thought Leaders.

The video is posted at the sight, but I would like to share an excerpt from the transcript:

Fred Fleitz: The House Intelligence Community discovered from the CIA that there was evidence that the Russians actually wanted Hillary Clinton to win the election and for Trump to lose. And this was strong intelligence. The reason was they thought Hillary was a known quantity. Trump was an unknown quantity and they were worried he would bring anti-Russian hawks into the administration. That information according to a House Intelligence staff, they told me this, was excluded over the objections of CIA analysts by Brennan. On the other hand, there was weak intelligence that the Russians wanted Trump to win. And according to House Intelligence Committee staffers this was included over the objection of CIA officers by Brennan. So Brennan actually slanted this analysis, choosing anti-Trump intelligence and excluding anti-Clinton intelligence. The problem is the House report, which I think is full of all these bombshells has been stuck at the CIA since the fall of 2018.

And, I’m hoping that Rick Grenell or maybe John Durham, who is doing an investigation of government misconduct surrounding the election. I’m hoping one of them is going to pry this loose because the American people have to know about it. 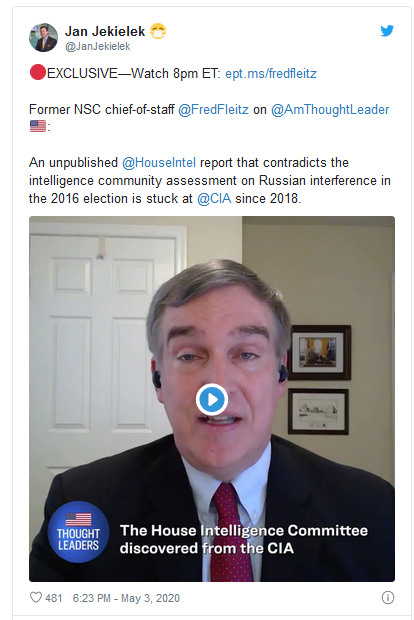 In his daily memo at The Washington Examiner, Byron York reported that the transcripts of the 53 secret interviews the House Intelligence Committee conducted during its Trump-Russia investigation are ready to be released. Having Rick Grenell as Acting Director of National Intelligence has already had an impact–he has made it clear that the transcripts need to be released and that he will release them if Adam Schiff does not.

…Acting Director of National Intelligence Richard Grenell has sent a letter to chairman Adam Schiff notifying him that transcripts of all 53 interviews, over 6,000 pages in all, have been cleared for public release. “All of the transcripts, with our required redactions, can be released to the public without any concerns of disclosing classified material,” Grenell wrote to Schiff in a letter dated May 4.

The Intel Committee did the first probe into Russia’s 2016 campaign interference and allegations of Trump-Russia collusion. Even today, its findings make up most of what we know about the affair. As part of that investigation — it was run by then-majority Republicans — the committee interviewed some key witnesses in the Trump-Russia matter: Donald Trump Jr., Steve Bannon, Andrew McCabe, Sally Yates, Michael Cohen, Hope Hicks, and many more.

The article lists the names of the 53 people interviewed.

The interviews were conducted in secret. But by September 2018, with the committee’s report long finished and made public, the Republicans who still controlled the committee decided the interview transcripts should be released to the public. In a rare moment of comity, Democrats agreed, and on September 26, 2018, the committee voted unanimously to release the transcripts. But there was a catch: The documents would have to first be checked for classified information by the Intelligence Community. So off they went to the IC — never to be seen again.

Now, in May 2020, they’re still secret. Two weeks ago, the Wall Street Journal editorial board reported that the IC had finished its review of 43 of the transcripts, but Schiff was refusing to release them. The paper said Schiff was also preventing declassification of the remaining ten transcripts.

In the letter, Grenell revealed that the 43 transcripts have been finished since June 2019. Schiff has been sitting on them all that time. Grenell said the final ten have just been finished as well. “I urge you to honor your previous public statements, and your committee’s unanimous vote on this matter, to release all 53 cleared transcripts to Members of Congress and the American public as soon as possible,” Grenell said. Just in case Schiff is still not interested, Grenell added, “I am also willing to release the transcripts directly from the Office of the Director of National Intelligence, as to ensure we comply with the unanimous and bipartisan vote to release the transcripts.”

I think we are about to learn a whole bunch of things that are going to make some of our Congressmen look very bad.

Yesterday PJ Media posted an article about President Trump’s appointment of Rick Grenell, the U.S. ambassador to Germany, as head of the Department of National Intelligence.

The article notes the mainstream media’s silence on one aspect of the appointment:

So it was rather surprising to discover that mainstream news stories about the first openly gay White House Cabinet member – ever, ever – were left on the newsroom floor.

I really don’t care that Ambassador Grenell is gay. I do care that he is loyal to the President, and lately that seems to be the exception rather than the rule in the Intelligence Community.

Please follow the link to the article to read the snippets from the mainstream media’s reporting on this appointment. Obviously Ambassador Grenell is not a member of the deep state, and the media is not happy with his appointment. His appointment also uncovers the lie that President Trump is anti-gay. I think the media may be having a bad day.