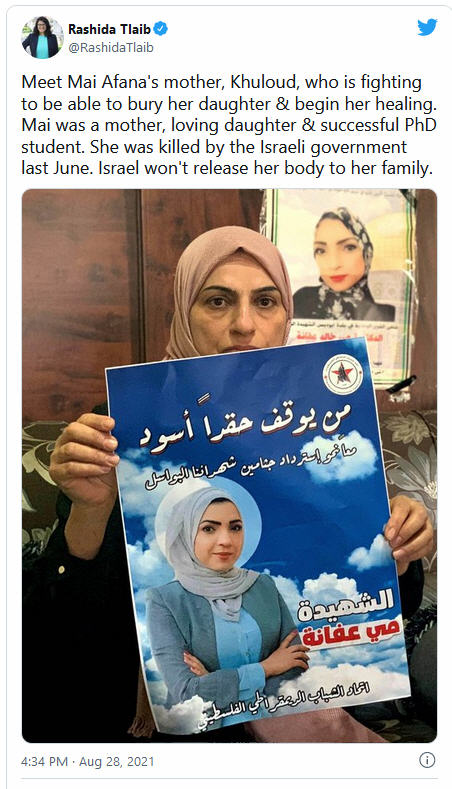 Wow. That’s awful. It’s very easy to sympathize with the mother. However, there is a whole lot more to the story.

On August 28, United States Congresswoman Rashida Tlaib (D-MI) ignited a firestorm after posting a claim on Twitter that Israel was dehumanizing Palestinians by not returning the body of an assailant who in June had attempted to ram a car into IDF soldiers before exiting the vehicle while wielding a knife. She was subsequently shot dead.

The assailant was Mai Afana, who had tried to kill Israeli soldiers, first with a car-ramming at a checkpoint and then with the knife she wielded after exiting the car, with which she intended to stab them.

Nevertheless, Tlaib wrote the following on the social media platform:

Meet Mai Afana’s mother, Khuloud, who is fighting to be able to bury her daughter & begin her healing. Mai was a mother, loving daughter & successful PhD student. She was killed by the Israeli government last June. Israel won’t release her body to her family.

“First, there is the obvious fact that Tlaib failed to even note that Afana had committed an act of terrorism.

In the current Palestinian culture, it is an honor to have your child die while killing or fighting Israelis. In fact, the group that rules the Palestinian territories pays families generously when one of their children is killed. Not returning the body of a terrorist is standard policy for Israel–experience tells them that returning the body will only result in more terrorism.

This tweet is an example of the way social media can be used to frame a story in a way that is totally misleading. In that tweet, Representative Tlaib is showing her support for terrorist activity. She sits in the U.S. House of Representatives as a Representative. That is not acceptable.