Received in my email today:

The United States’ Founders created the
Electoral College to ensure the STATES and ALL AMERICANS  are FAIRLY represented.

Why should one or two densely populated areas speak for the whole of the Nation?  Do they truly represent all states and our entire Nation?

There are 3,141 counties in the United States.

There are 62 counties in New York State.

Therefore these 4 MEGA counties in New York City alone, more than accounted for Clinton winning the popular vote of the entire country.

Should a Nation that encompasses almost 4 million square miles,

be ruled by those who live in one small corner of the vast nation–a mere 319 square miles?

Should this small section of the country dictate a National Election?

On Thursday, The Hill reported that Nevada’s Democratic Gov. Steve Sisolak on Thursday vetoed the National Popular Vote Interstate Compact, which had been passed by the Nevada Assembly and Senate.

The National Popular Vote Interstate Compact would essentially nullify the Electoral College. However, it will not become effective unless enough states to control 280 electoral college votes pass the measure. The idea is that 280 electoral votes would be a majority of the Electoral College and would elect the person who got the most popular votes. At that point we would live in a county governed by New York and California–two states that have not done a particularly good job of governing themselves. That is exactly what our Founding Fathers were attempting to avoid (as explained by Alexander Hamilton in Federalist 68).

And as the electors, chosen in each State, are to assemble and vote in the State in which they are chosen, this detached and divided situation will expose them much less to heats and ferments, which might be communicated from them to the people, than if they were all to be convened at one time, in one place.

Nothing was more to be desired than that every practicable obstacle should be opposed to cabal, intrigue, and corruption.

To illustrate what elections would look like without the Electoral College, let’s look at where the campaign money comes from in elections.

According to opensecrets.org the top donor states are California (22 percent), New York (21 percent), Illinois (7 percent), and Florida (6 percent). The other states provided 44 percent of campaign donations. California has 40 million people; West Virginia has 2 million people. Without the Electoral College, how likely is a presidential candidate to campaign in (or represent) the people in West Virginia? There is a valid reason for the Electoral College.

On Thursday, USA Today posted an article about the National Popular Vote Interstate Compact (NPV). That is the proposal working through the states that would essentially eliminate the Electoral College. The article points out that the Electoral College was put in place as a part of the system of checks and balances to make sure that small, less populated states would be represented in presidential elections.

Rural America produces almost all our country’s food, as well as raw materials like metals, cotton and timber. Energy, fossil fuels but also alternatives like wind and solar come mostly from rural areas. In other words, the material inputs of modern life flow out of rural communities and into cities.

This is fine, so long as the exchange is voluntary — rural people choose to sell their goods and services, receive a fair price, and have their freedom protected under law. But history shows that city dwellers have a nasty habit of taking advantage of their country cousins. Greeks enslaved whole masses of rural people, known as helots. Medieval Europe had feudalism. The Russians had their serfs.

Credit the American Founders with setting up a system of limited government with lots of checks and balances. The U.S. Senate makes sure all states are represented equally, even low-population rural states like Wyoming and Vermont. Limits on federal power, along with the Bill of Rights, are supposed to protect Americans from overreaching federal regulations. And the Electoral College makes it impossible for one population-dense region of the country to control the presidency.

The article notes that the reason Hillary Clinton lost the presidential election is 2016 is that she won California and some big cities, but failed to win votes in the center of the country.

And the system worked. The Electoral College requires more than just the most raw votes to win — it requires geographic balance. This helps to protect rural and small-town Americans.

The article notes that fourteen states have already passed NPV. The good news is that NPV only takes effect after it is joined by enough states to control 270 electoral votes (a majority of electoral votes). At the point the Electoral College becomes moot. If the NPV reaches 270 electoral votes, what is the point of voting in a presidential election if you live in a sparsely-populated state? We will be run by California, New York, and some major cities. None of the states or cities involved are particularly well-governed–some of them are on the verge of bankruptcy. Is this really a good idea?

The idea that every vote should count equally is attractive. But a quote often attributed to Benjamin Franklin famously reminds us that democracy can be “two wolves and a lamb voting on what’s for lunch.” (City dwellers who think that meat comes from the grocery store might not understand why this is such a big problem for the lamb.) And when you think about it, every check on government power, from the Electoral College to the Bill of Rights, is a restraint on the majority.

The Electoral College makes it even harder to win the presidency. It requires geographic balance and helps protect Americans who might otherwise have their voices ignored. All Americans should value constitutional protections, like the Electoral College, that remind us that the real purpose of government is to protect our individual rights.

On March 8 the Associated Press posted an article about a change in the way that Delaware casts its electoral college votes.

The legislation, approved on a 14-7 vote, requires Delaware to cast its three electoral votes for the national popular vote winner, rather than the winner of the popular vote in Delaware. Two Republicans joined majority Democrats in voting for the bill, which now goes to the Democrat-led House.

Eleven Democratic-leaning states and the District of Columbia already have voted to enter the National Popular Vote Interstate Compact. Democrat-controlled Colorado will soon join the list, giving the compact 181 of the 270 electoral college votes needed to elect the president.

So if I live in Delaware, why should I vote?

This is the county map of the 2016 Presidential Election: 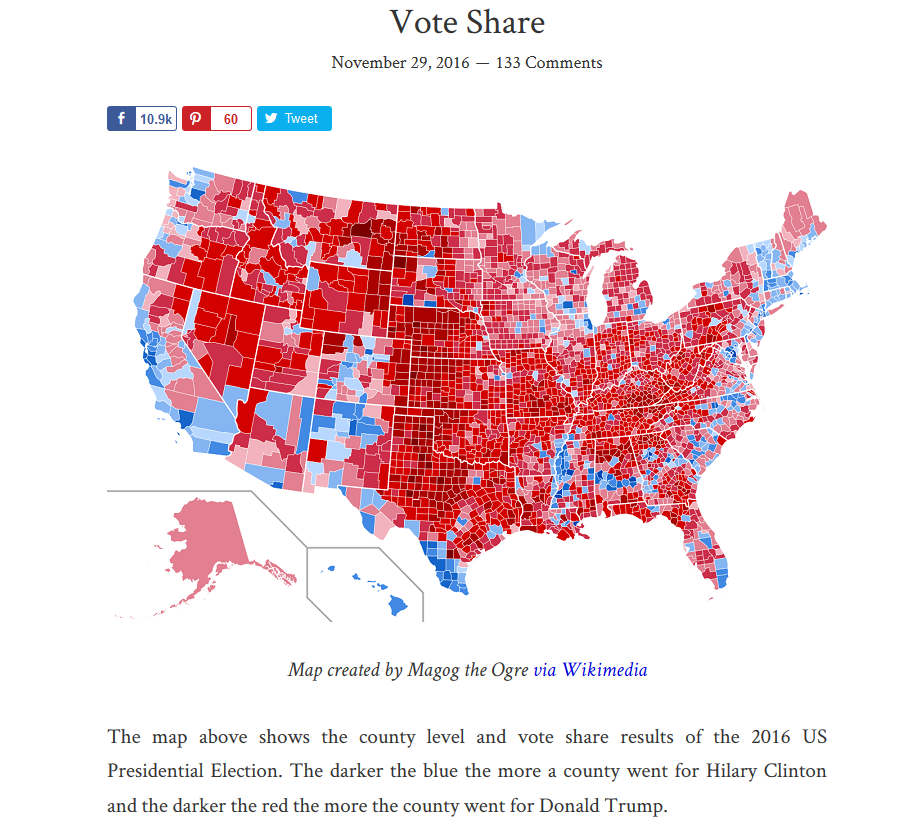 The new law in Delaware essentially says to its citizens, “We don’t care who you voted for, your votes are going with the majority. If the majority consists of New York, California, and the major cities, they are going to be the people who elect the President.”

So if you live in Delaware, why should you vote for President?

If you want evidence that the Democrats are attempting to fix the next Presidential election, the article provides it:

Eleven Democratic-leaning states and the District of Columbia already have voted to enter the National Popular Vote Interstate Compact. Democrat-controlled Colorado will soon join the list, giving the compact 181 of the 270 electoral college votes needed to elect the president.

This is a map of the states that have signed on to the National Popular Vote Interstate Compact: 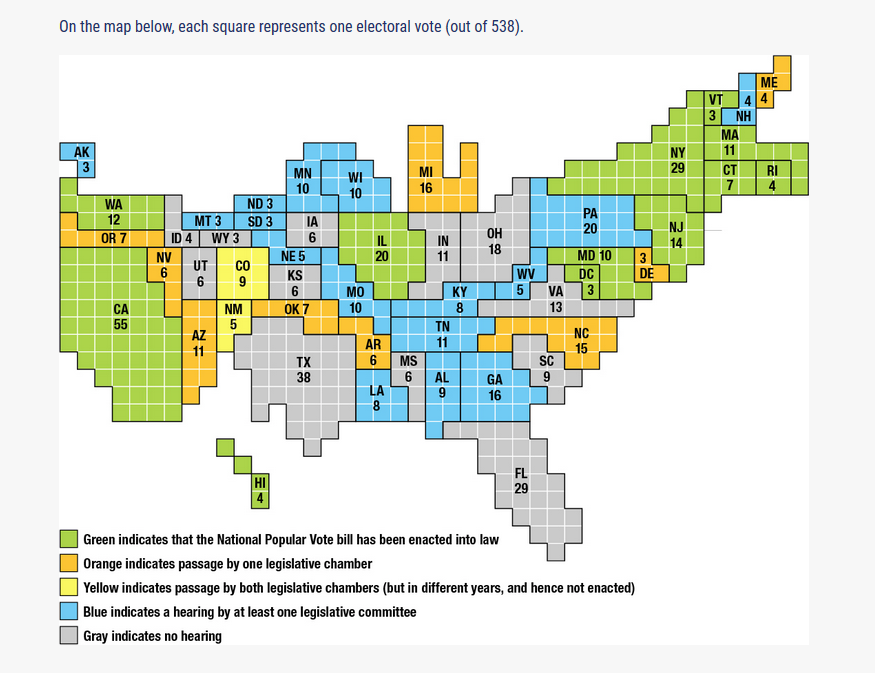 This could end our representative republic.

Holly Robichaud posted a column in The Boston Herald yesterday about the Inauguration of President Donald Trump that will occur this Friday.

Failing to comprehend the mood of the country, Democrats have been working feverishly to undermine Trump in every way possible. In doing so they are holding back our country and further sabotaging any chance for a political comeback in two years.

Their collective tone-deafness emphasizes how out of touch and how much they are dedicated to the status quo of big government. Voters have had enough of the Washington political gamesmanship. That’s why the outsider candidate won the White House.

…Not only do Democrats need to give Trump a honeymoon, but so do establishment Republicans. They need to put aside their damaged egos. Sens. John McCain and Lindsay Graham are trying to hijack foreign policy and Marco Rubio is offering up some political payback. Being frustrated that Trump did what none of them could — win the presidency — is not acceptable.

The people deserve at least a 100-day honeymoon with Trump. I urge the Republican establishment and Democrats to work with our new president to get things done. The status quo is over! It is Trump time.

The thing to remember about the election of Donald Trump is that with the exception of parts of California and New York, Donald Trump won the popular vote by a wide margin.

This is the popular vote if you exclude California:

We have some serious problems globally and within America right now. Donald Trump has won the right to put his policies in place to solve them. Let’s at least give him a chance.