Yesterday The Washington Examiner posted an article about some campaign finance violations by Representative Alexandria Ocasio-Cortez’s chief of staff, Saikat Chakrabarti. The violations listed are not minor violations, there are some major amounts of money involved here.

Two political action committees founded by Rep. Alexandria Ocasio-Cortez’s top aide funneled over $1 million in political donations into two of his own private companies, according to a complaint filed with the Federal Election Commission on Monday.

…The arrangement skirted reporting requirements and may have violated the $5,000 limit on contributions from federal PACs to candidates, according to the complaint filed by the National Legal and Policy Center, a government watchdog group.

Campaign finance attorneys described the arrangement as “really weird” and an indication “there’s something amiss.” They said there was no way of telling where the political donations went — meaning they could have been pocketed or used by the company to pay for off-the-books campaign operations.

PACs are required to disclose how and when funds are spent, including for expenditures such as advertisements, fundraising emails, donations to candidates, and payments for events and to vendors.

The private companies to which Chakrabarti transferred the money from the PACs are not subject to these requirements.

Please follow the link above to read the entire article for the details.

This is interesting for a number of reasons. Was it a rookie mistake or was it planned corruption? Is this coming out now because AOC has become a problem for the Democrats–she is so far left that she may cost them votes in 2020?

Bradley A. Smith, a former chairman of the FEC, said he has never seen such an arrangement. “It’s a really weird situation,” he said. “I see almost no way that you can do that without it being at least a reporting violation, quite likely a violation of the contribution limits. You might say from a campaign finance angle that the LLC was essentially operating as an unregistered committee.”

A spokesperson for Justice Democrats said he did not know why the PAC paid so much money to Chakrabarti’s LLCs. When asked what the Justice Democrats PAC does on a daily basis, he said, “It’s very clear what we do,” but declined to elaborate.

Chakrabarti founded Brand New Congress PAC, in April 2016. According to a statement released by Justice Democrats PAC last May, Chakrabarti “was the only controlling member” of the company Brand New Congress LLC and “took no salary.” The statement added: “Saikat is lucky to have a small side business that generates him enough income that he is able to do all of this work as a volunteer.”

If this story is accurately reported, it is bound to get more interesting!

The Associated Press posted an article today about the Supreme Court’s decision that government workers can’t be forced to contribute to labor unions that represent them in collective bargaining.

A recent study by Frank Manzo of the Illinois Economic Policy Institute and Robert Bruno of the University of Illinois at Urbana-Champaign estimated that public-sector unions could lose more than 700,000 members over time as a result of the ruling and that unions also could suffer a loss of political influence that could depress wages as well.

Alito acknowledged that unions could “experience unpleasant transition costs in the short term.” But he said labor’s problems pale in comparison to “the considerable windfall that unions have received…for the past 41 years.”

Billions of dollars have been taken from workers who were not union members in that time, he said.

Kagan, reading a summary of her dissent in the courtroom, said unions only could collect money for the costs of negotiating terms of employment. “But no part of those fees could go to any of the union’s political or ideological activities,” she said.

The court’s majority said public-sector unions aren’t entitled to any money from employees without their consent.

There are two aspects of this decision that are going to make the political left very unhappy. Obviously this will severely limit the amount of money unions can contribute to Democrat political campaigns (to check union political donations, see opensecrets.org). But there is another issue here–pension funds. The other aspect of this decision is union retirement funds.

In a column in the Washington Examiner in April, Mark Hemingway pointed out that the average union pension plan had only enough money to cover 62 percent of its financial obligations.  Pension plans that are below 80 percent funding are considered “endangered” by the government; below 65 percent is considered “critical.”  Union membership is declining, which means that less people are paying into these funds.

The PBGC was created to encourage the continuation and maintenance of voluntary private defined benefit pension plans, provide timely and uninterrupted payment of pension benefits, and keep pension insurance premiums at the lowest level necessary to carry out its operations. Subject to other statutory limitations, PBGC’s insurance program pays pension benefits up to the maximum guaranteed benefit set by law to participants who retire at 65 ($60,136 a year as of 2016).[2] The benefits payable to insured retirees who start their benefits at ages other than 65 or elect survivor coverage are adjusted to be equivalent in value.

The summary of S3157 at congress.gov states:

Create Jobs and Save Benefits Act of 2010 – Amends the Employee Retirement Income Security Act of 1974 (ERISA) and the Internal Revenue Code to: (1) permit multiemployer pension plans to merge or form alliances with other plans; (2) increase Pension Benefit Guaranty Corporation (PBGC) guarantees for insolvent plans to increase participant benefits; and (3) increase from $8.00 to $16.00 the annual premium rate payable to the PBGC for each individual who is a participant of a multiemployer plan after December 31, 2010. (The underline is mine)

Stay tuned. This is going to get interesting.

The Washington Examiner posted an article today about ending the federal funding for abortion.

President Trump’s action last week, barring Title X family planning funds from programs and facilities that perform abortions, is thus entirely right and reasonable. For all Planned Parenthood’s gnashing of teeth, the only thing to suffer will be its own profits and the rewards of its senior executives. The public good and women’s health will, at a minimum, remain completely unaffected and, depending on your perspective, will be improved.

According to opensecrets.org, in the 2016 election cycle, Planned Parenthood (through its PAC) donated $671,048 to federal candidates (98% to Democrats, 1% to Republicans).

According to the ACLJ (American Center for Law and Justice):

Planned Parenthood just released their 2016–2017 annual report. The findings are clear: over 320,000 abortions committed in the last year; over half a billion in government funding; nearly $100 million in profit (a staggering 27% increase over the prior year). Big Abortion is big business.

Regardless of where you stand on protecting the unborn, abortion should not be a million dollar business.

It is obvious from the above numbers that Planned Parenthood does not actually need federal money–they are making a substantial profit on their own and they are supporting political candidates.

It has been my belief for a long time that entities that make political contributions should not be eligible for federal funds. This should include any political action committees (PACS) set up by those entities. This seems rather obvious to me, but evidently Congress has not yet figured it out (I guess Congress likes its donations from these entities). The idea of taking federal money and making political donations seems like money laundering to me.

The following is from opensecrets.org: 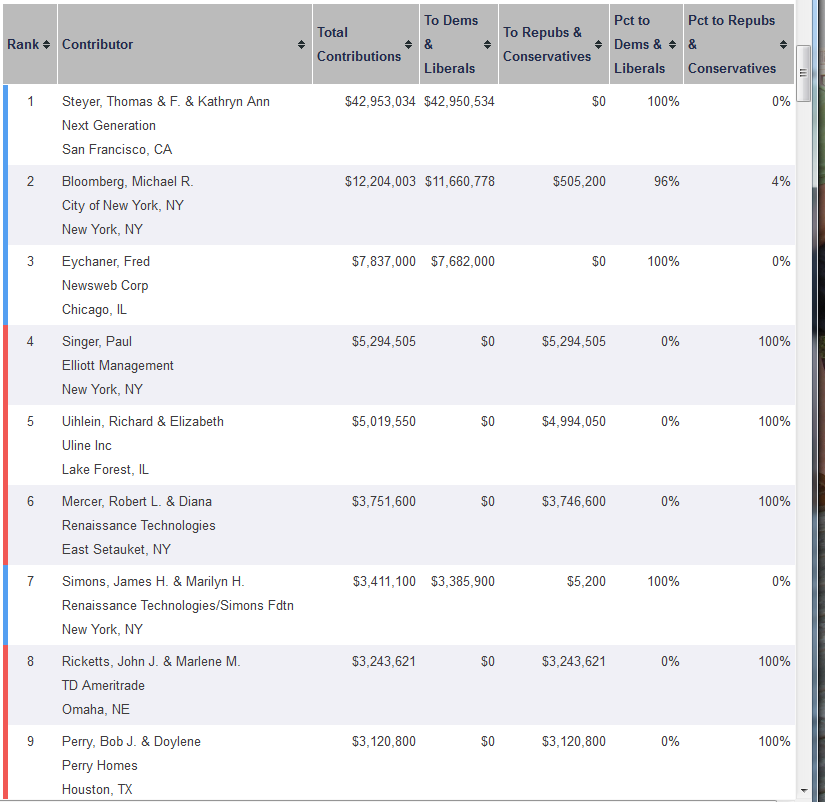 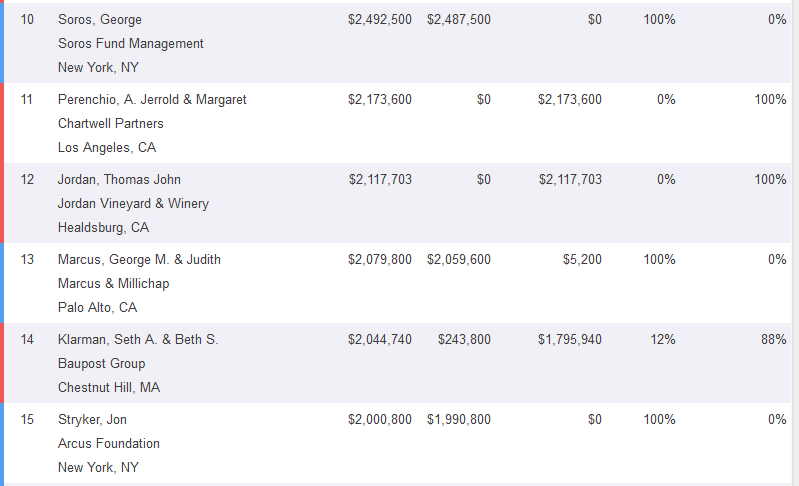 My point in posting this is to illustrate that the money in politics comes from both sides. As much as all of us hate to see the amount of money spent on political campaigns, we need to remember that the money spent does provide jobs for people working on the campaign, jobs for people in various forms of media, jobs for publishers, and other people directly and indirectly related to the political season. I don’t think you can limit the amount of money spent on political campaigns without interfering with free speech rights. The only way to look at these numbers and retain your sanity is to realize that much of this money provided jobs for people who might have been otherwise unemployed.