Please read the following excerpt from the article carefully and note the wording:

President Joe Biden signed an executive order on Friday empaneling a commission to examine possible reforms to the Supreme Court and federal judiciary, making good on a campaign trail promise sparked by his predecessor’s tilting of the federal bench.

Biden first floated the idea of such a commission last fall on the campaign trail following the death of Justice Ruth Bader Ginsburg — whose seat on the high court was quickly filled by Amy Coney Barrett, installing a 6-3 majority of justices nominated by Republican presidents.

Note the expression ’tilting of the federal branch.’ That statement is an example of media bias. Note that President Obama was never accused of tilting the federal bench despite the fact that his appointed justices were well outside the mainstream of the views of most Americans.

The commission is likely to raise hackles among conservatives as a veiled attempt to reshape the court after Trump and Senate Republican leader Mitch McConnell prioritized installing federal judges over the past four years.

Its formation comes as Stephen Breyer, the Supreme Court’s eldest justice, faces pressure from liberal legal activists to step down during Biden’s term so that his successor would be appointed and confirmed while Democrats hold the White House and Senate.

Earlier this week, Breyer issued a warning to advocates of overhauling the Supreme Court that doing so risks eroding the trust in the institution and that they should think “long and hard” about the ramifications in a speech given virtually to Harvard Law School students.

The White House said the commission will complete its work within 180 days of its first public meeting, which it is required to do under federal law.

It will be interesting to see where this goes. Most Americans do not want to see more justices added to the Supreme Court–particularly to make it politically biased. Franklin Roosevelt attempted to do this during his term as President and was rebuffed by his own party. However, the current Democrat party does not necessarily have the scruples that the Democrat party of Roosevelt had. 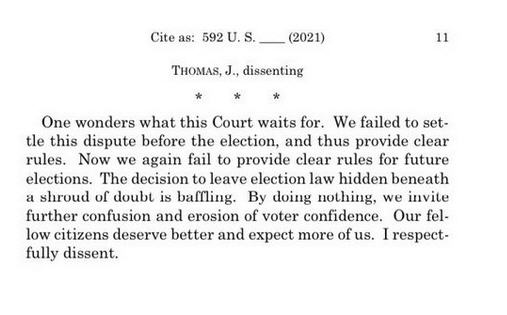 Yesterday The Daily Caller posted an article about an interview on ” Fox News Sunday.” Chris Wallace, who hosts the show, was conducting an interview of Democratic Delaware Sen. Chris Coons.

Wallace specifically asked Coons to weigh in on the idea of adding justices to the Supreme Court, and the Delaware Senator pivoted to argue that the Trump administration’s focus on filling judicial vacancies amounted to court packing.

For once, Chris Wallace got it right. The article notes:

“Let me just say — I’m just going to say, that’s a different issue than packing the court,” Wallace concluded. “If that’s the question, whether or not the court should — the Senate should vote to confirm Barrett, that’s different than changing the number of justices on the court. Senator Coons, I got to leave it there, thank you.”

For the record, packing the court means adding more justices to the Supreme Court in order to impact the balance of liberal and conservative judges. Filling judicial vacancies is one of the responsibilities of the President. Because of the increasing rancor in the Senate, a large number of the nominees of President Obama were not confirmed, and there were a lot of judicial vacancies when President Trump took office. He promptly began to fill these vacancies. Getting judicial nominees passed is much easier when the President and the Senate are held by the same party. Our Founding Fathers did not intend for that to be the case (they disliked the idea of political parties), but that is where we are today.

I give credit to Chris Wallace for at least correcting Senator Coons on his talking point.