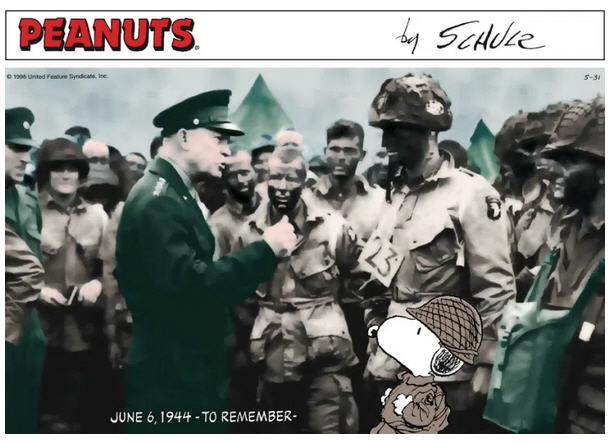 Today is the 76th anniversary of the landing on the beaches of France by the Allied Armies (D-Day). General Dwight Eisenhower chose to go on that day because the weather reports showed that day as the only possible window in a stormy period.  He met with his troops before the invasion to talk to them and send them off with prayers and well wishes.  He composed a letter to be read in case the invasion failed.  The letter took full responsibility for that failure if it occurred.  Because of the leadership of Dwight Eisenhower and the courage of the American, Canadian, and British troops, we are free today to do our Saturday errands, enjoy our children, and generally live our lives in freedom.

This is the text of the letter General Eisenhower wrote in case the invasion failed:

“Our landings in the Cherbourg-Havre area have failed to gain a satisfactory foothold and I have withdrawn the troops. My decision to attack at this time and place was based upon the best information available. The troops, the air and the Navy did all that Bravery and devotion to duty could do. If any blame or fault attaches to the attempt it is mine alone.”

Just a quick personal note about D Day–my father was one of the soldiers who landed on Utah beach.  He never talked much about his wartime experiences, but there are two things I remember from talking to him.  When the Allied troops landed on Utah Beach, they had been blown off course by the winds and heavy surf.  Because of that, they landed in a place that was less fortified by the Germans and were able to more forward more quickly than they might have otherwise moved.  The other thing he mentioned was the total secrecy surrounding the invasion.  There were cardboard tanks placed in England to make it look as if they were going ashore at Calais (which was the closest point to England).  Everything was top secret–but the payday before the invasion, they were paid in French francs!!!

Yesterday The Military Times posted a story about D-Day. I would like to share some of that story so that people who may not have studied that day and what it meant can appreciate what the young men involved did on that day.

Seventy-two years ago, on June 6, 1944, Allied troops waded ashore on the beaches of Normandy to liberate Nazi-occupied Europe. The night before, on June 5, American airborne forces had landed on the western flank of the invasion area near Sainte-Mère-Église, while British airborne forces secured the eastern flank and Pegasus Bridge. They jumped out of C-47 Dakota transport planes, through darkness and into glory. Some arrived by glider. Pvt. John Steele of the 82nd Airborne landed on the steeple of the church at Sainte-Mère-Église. He managed to survive by playing dead.

…On Utah Beach — all of the landing sites had code names — 56-year-old Brig. Gen. Theodore Roosevelt Jr. (the oldest son of former President Teddy Roosevelt) landed about a mile from his intended target. When asked whether to re-embark the 4th Infantry Division, he simply said, “We’ll start the war from right here!”

Imagine if an operation like the Normandy landing were to occur today in 2016. In the age of social media, interactive polls would ask: “Which beach do you prefer, Normandy or Pas de Calais?” Could all the members of the 101st Screaming Eagles, painted in Indian war paint with Mohawk haircuts, be counted upon not to post their pictures on Facebook? That seems doubtful.

…This June 6, raise a glass and toast the heroism of all those young men who fought to liberate America’s oldest ally from Nazi occupation. Without their service and sacrifice, our world would be a darker place. General Patton may have summed it up best when he said, “It is foolish and wrong to mourn the men who died. Rather we should thank God that such men lived.” 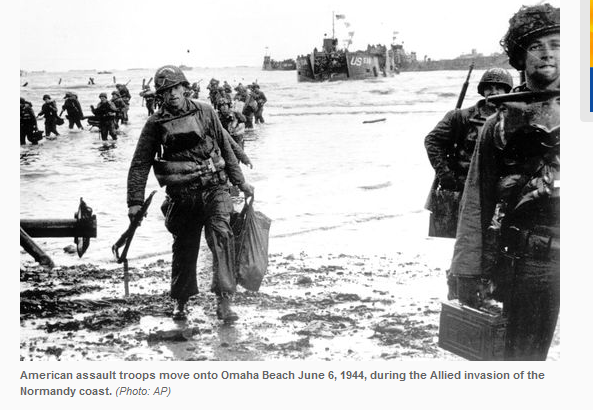 My father was one of the men who landed on Utah beach. I can’t image what those men went through. I only hope that somehow as America is faced with the Islamization that has happened in most of Europe we will find the same courage that America had in 1944.