First of all, the following chart is found at the Bureau of Labor Statistics website. It shows the Workforce Participation Rate in recent years.

The number 62.9 is not a great number, but it is a step in the right direction.

Below is a chart posted at the Bureau of Labor Statistics website showing the unemployment rate for October. 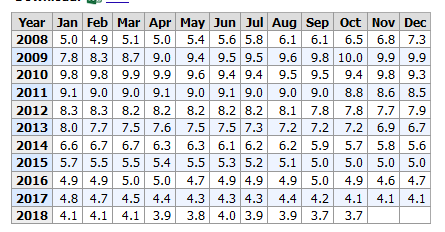 The fact that the unemployment rate remained steady as the labor participation rate increased is good news for Americans. It means that there is continued growth in the job market.

Employers shook off a September slowdown to add 250,000 jobs to their payrolls in October, above monthly averages in recent years, the Labor Department said Friday. With unemployment holding at 3.7%, a 49-year low, and employers competing for scarce workers, wages increased 3.1% from a year earlier, the biggest year-over-year gain for average hourly earnings since 2009.

…The share of Americans in their prime working years, between 25 and 54, who are working or looking for work rose to the highest rate since 2010 last month, at 82.3%.

President Trump touted the figures in a tweet Friday, just days before midterm elections that will decide control of Congress. “Wages UP! These are incredible numbers,” Mr. Trump said.

Employers have added to their payrolls for a record 97 straight months.

This is the Trump economy. The Federal Reserve is beginning to raise interest levels to more normal levels, which may slow down the growth of the economy, but keeping interest rates at artificially low levels is not a good long-term strategy. We still have a need to control our spending and get the national debt under control, but strong economic growth and a lessening of the need for welfare programs should begin that process. There will be some adjustments along the way–low interest rates will no longer be keeping the stock market artificially high and rising interest rates may slow the housing market, but raising interest rates will also help bring us back to a more balanced economy.

If the Republicans hold Congress, the economic growth will continue. If the Democrats gain control of the House of Representatives, we will be in for a very bumpy economic ride.

Reuters is reporting today that U. S. weekly jobless claims have recorded their biggest drop in two years.

Initial claims for state unemployment benefits declined 25,000 to a seasonally adjusted 234,000 for the week ended April 1, the Labor Department said on Thursday. The drop was the largest since the week ending April 25, 2015.

The prior week’s data was revised to show 1,000 more applications received than previously reported.

Claims have now been below 300,000, a threshold associated with a healthy labor market for 109 straight weeks. That is the longest stretch since 1970 when the labor market was smaller.

The labor market is currently near full employment.

A Labor Department analyst said there were no special factors influencing last week’s claims data. Claims for Louisiana were estimated.

The four-week moving average of claims, considered a better measure of labor market trends as it irons out week-to-week volatility, fell 4,500 to 250,000 last week.

The article reminds us that last week’s data will have no impact on the March unemployment report due out on Friday.

According to a Reuters survey of economists, nonfarm payrolls likely increased by 180,000 jobs last month after rising 235,000 in February. The unemployment rate is seen steady at 4.7 percent.

Thursday’s claims report also showed the number of people still receiving benefits after an initial week of aid decreased 24,000 to 2.03 million in the week ended March 25. The four-week moving average of the so-called continuing claims fell 7,750 to 2.02 million, the lowest level since 2000. 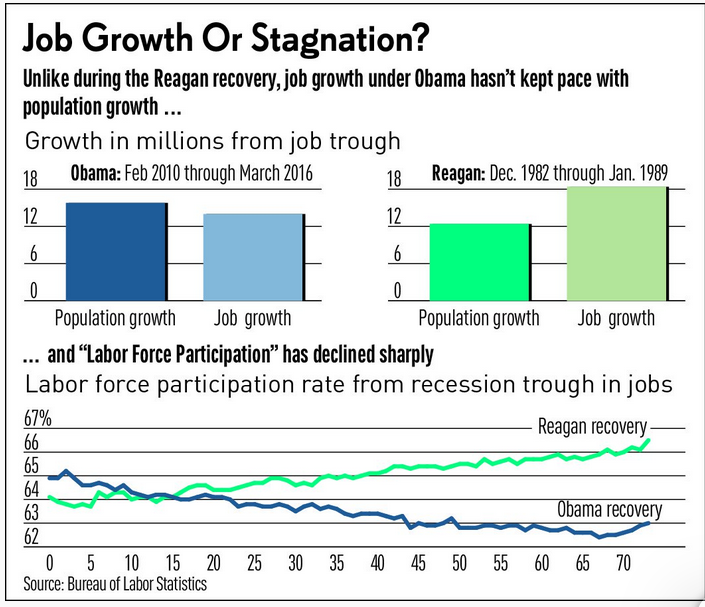 On Friday, Investor’s Business Daily posted their analysis of the recent jobs report. The report was more positive than some recent reports, but there were still a few problems.

The alternative measure used by the Department of Labor based on the household survey, showed job growth was even swifter, with a gain of 485,000. Best of all, nearly half a million Americans on net entered the labor force, helping reverse for now a horrid slide in labor market participation.

Average wages were down a notch to $25.24 — bad news on a number of fronts. Real median wages have now been flat for almost a decade. It looks like a lot of those new jobs in December were at McDonald’s or Wal-Mart. About 37,000 came in bars and restaurants. The painful pattern of this recovery is that the jobs gained don’t pay as much as the jobs that have disappeared.

Low oil prices are normally good news for the economy, but their relentless decline of late is a symptom of weak global demand from producers. The likelihood of any growth-oriented policy changes in Washington on regulations, taxes, ObamaCare or trade promotion seem remote in the near term. And the Fed is warning of three or four more interest-rate hikes later in the year.

Also on Friday, Donald Trump, the Republican front-runner for president, proposed a 45% tariff on Chinese goods and services. It’s hard to be bullish in such an environment.

We need some serious changes in economic policies in order to grow the economy. Hopefully the election in November will bring those changes.

Breitbart.com posted an article today about the June jobs report. Most of the mainstream media is trumpeting the fact that 237,000 jobs were created in June. That is good, but what they fail to mention is that the civilian labor force shrank by 432,000.

While people dropped out of the workforce the BLS (Bureau of Labor Statistics) highlighted that the unemployment rate declined to 5.3 percent and payroll jobs increased by 223,000.

The number of people who dropped out of the labor force was higher than the number of jobs created. That is not a good thing.