On May 21, 2017, the Business Insider reported the following:

China killed or imprisoned 18 to 20 CIA sources from 2010 to 2012, hobbling U.S. spying operations in a massive intelligence breach whose origin has not been identified, the New York Times reported on Saturday.

The article at Business Insider stated:

By 2013, U.S. intelligence concluded China’s ability to identify its agents had been curtailed, the newspaper said, and the CIA has been trying to rebuild its spy network there.

Hillary Clinton set up her private server when she took office as Secretary of State in January 2009; she left that position on February 1, 2013.

The Chinese killed at least a dozen people providing information to the CIA from 2010 through 2012, dismantling a network that was years in the making, the newspaper reported.

One was shot and killed in front of a government building in China, three officials told the Times, saying that was designed as a message to others about working with Washington.

The breach was considered particularly damaging, with the number of assets lost rivaling those in the Soviet Union and Russia who perished after information passed to Moscow by spies Aldrich Ames and Robert Hanssen, the report said. Ames was active as a spy in the 1980s and Hanssen from 1979 to 2001.

The CIA declined to comment when asked about the Times report on Saturday.

The Chinese activities began to emerge in 2010, when the American spy agency had been getting high quality information about the Chinese government from sources deep inside the bureaucracy, including Chinese upset by the Beijing government’s corruption, four former officials told the Times.

I think we need some accountability here.

This chart was posted  yesterday at The Weekly Standard: 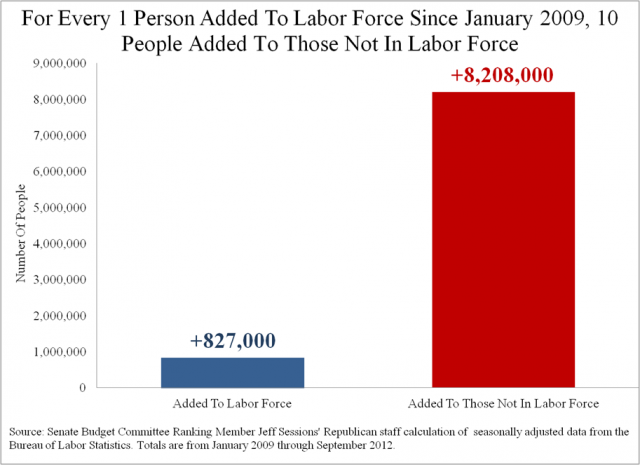 “For Every 1 Person Added To Labor Force Since January 2009,” the chart reads, “10 People Added To Those Not In Labor Force.”

Please remember this chart when President Obama tells all of us in the debate tonight how many jobs he has created since he took office.