On Friday, Yahoo News posted a story about  resolution by the United Nation‘s Human Rights Council calling for those responsible for war crimes during last summer’s Gaza conflict to be brought to trial.

Yesterday The Times of India posted an article about the vote. That article reports:

While 41 countries (including most of the European Union) voted in favour of adopting the report, five, including India, abstained. The US was the only country to vote against it. Four other countries who abstained were Kenya, Ethiopia, Paraguay and Macedonia.

Normally I would be in favor of putting anyone on trial who had committed war crimes, but in this case, I think you have to look at the matter carefully.

This is a chart (from Wikipedia) showing the rocket attacks on Israel in 2014 that originated in the Gaza Strip: 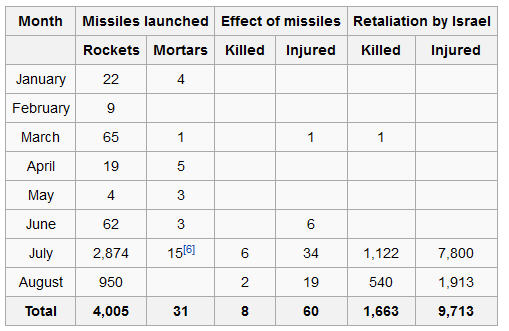 These rockets were not aimed at military targets, they were aimed at civilians. It is also known that Hamas houses rockets in hospitals and other buildings known to house civilians. Hamas is also know to use human shields. I can almost guarantee that the United Nations report will overlook much of this part of the story.

The thing to remember here is that the conflict between Israel and Hamas has more than one dimension. One dimension that should always be considered when listening to stories from the Middle East is the propaganda aspect. In May 2013, I posted a story about the staged death of Muhammad al-Dura, an 11-year old who was used for propaganda purposed after a film was released claiming he had been killed by the Israelis. More details can be found here. Often the propaganda war is more important than actual events on the ground.

Unfortunately, it is very likely that the U.N. investigation will be a sham. The track record on the United Nations in regard to Israel is not good. As of 2015, Israel has been condemned in 62 resolutions by the Council since its creation in 2006—the Council has resolved more resolutions condemning Israel than the rest of the world combined.

We need to stand by Israel. I don’t know why Europe voted for this, but I am glad to see India abstain.

Yesterday the Israel National News reported that anti-racism activists in Norway refused to take part in a ceremony remembering Kristallnacht  if members of the Jewish community were invited to it. The ceremony took place earlier this week.

According to blog “Norway, Israel and the Jews,” Norwegian organization New SOS Racisme – which claims to act against racism – demanded that the “Zionist Jews of Bergen” be banned from attending the Kristallnacht memorial event held earlier this week.

IBT (International Business Times) noted that the incident occurred “a few days after Denmark’s ceremony in Norrebro district, marking the Holocaust, was used to raise money for Gaza, following the 2014 Israel-Gaza war.”

Gaza suffered damaged during the 2014 Israel-Gaza war. However, leading up to that war, Gaza had been attacking Israel daily with rockets and building tunnels to go into Israel and kill civilians. Money given to Gaza to build infrastructure was instead used to build those tunnels and buy weapons. I have no doubt that money currently given to Gaza will also be used to buy arms and plan military attacks on Israel.

My questions here is simple, “Who is the racist?”

Yesterday Charles Krauthammer posted an article in the Washington Postasking the obvious question, “Why was there a war in Gaza?” Hamas claims that the firing of rockets on Israel was part of the resistance to the occupation. What occupation? That is an interesting question.

What occupation? Seven years ago, in front of the world, Israel pulled out of Gaza. It dismantled every settlement, withdrew every soldier, evacuated every Jew, leaving nothing and no one behind. Except for the greenhouses in which the settlers had grown fruit and flowers for export. These were left intact to help Gaza’s economy — only to be trashed when the Palestinians took over.

Israel then declared its border with Gaza to be an international frontier, meaning that it renounced any claim to the territory and considered it an independent entity.

In effect, Israel had created the first Palestinian state ever, something never granted by fellow Muslims — neither the Ottoman Turks nor the Egyptians who brutally occupied Gaza for two decades before being driven out by Israel in the 1967 Six-Day War.

So what is the problem? If Israel is not occupying Gaza, why are the rockets being fired?

Interrupted by the occasional truce, to be sure. But for Hamas a truce — hudna — is simply a tactic for building strength for the next round. It is never meant to be enduring, never meant to offer peace.

But why, given that there is no occupation of Gaza anymore? Because Hamas considers all of Israel occupied, illegitimate, a cancer, a crime against humanity, to quote the leaders of Iran, Hamas’s chief patron and arms supplier. Hamas’s objective, openly declared, is to “liberate” — i.e., destroy — Tel Aviv and the rest of pre-1967 Israel. Indeed, it is Hamas’s raison d’etre.

There will be no peace for Israel as long as Hamas holds power in Gaza and their charter calls for the destruction of Israel. If the western countries of the world truly want peace in the Middle East, they need to take that fact into consideration. Israel has survived another attempt to destroy it, but, unfortunately, this will not be the last attempt.

YNET News reported today that Israel fired rockets into the Gaza Strip in retaliation for Qassam rockets fired into Israel on Wednesday night.

Israeli aircraft bombed overnight Thursday an underground tunnel used by terrorists in north Gaza and a terror activity hub in the central part of the Hamas-ruled territory.

There was a second air strike by the Israeli Air Force targeting a Jihad terror cell preparing an attack on the Israel-Egypt border.

IDF officials said Wednesday that while 2009’s Operation Cast Lead achieved the majority of its goals, the military will not hesitate to stage another Gaza campaign should the security situation in the sector deteriorate.

I wonder how patient America would be with a neighboring country that was consistently launching rockets into civilian areas of our country.