This graph is from an article in Tuesday’s New York Times. It has to do with the reporting of civilian casualties in Gaza. 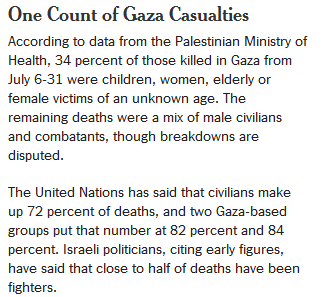 The New York Times reminds us that all civilian casualties reported in Gaza are not civilians:

But the Meir Amit Intelligence and Terrorism Information Center, the Israeli group that analyzed the first Palestinian deaths, accused the Hamas-controlled Health Ministry of “concealment and deception” in order “to create an ostensibly factual infrastructure for a political, propaganda and legal campaign against Israel.”

We need to remember that Hamas soldiers do not always wear uniforms. Those infiltrating Israel through the tunnels wore IDF uniforms. As has been previously stated, Hamas routinely puts rocket launchers in heavily populated civilian areas. That is part of their strategy in the propaganda war. Now that the journalists are leaving Gaza, they are reporting rockets being fired from directly under their hotel rooms and in civilians areas. The world needs to understand the propaganda war being waged by Hamas and not fall prey to the misinformation that is being reported.

Tyler Hicks, the New York Times photographer, begins by telling us that Hamas fighters are hiding in civilian areas, embedded within the civilian population and firing rockets from residential neighborhoods:

I was stationed in Gaza, and covered the Palestinian side of the war where you saw most of the casualties.  One of the reasons for that is because the Hamas fighters are living among the civilian population. . . .  This is a situation where the fighters fire rockets from all over the Gaza Strip, from neighborhoods to cemeteries, from parking lots, from any number of places.

And no, the reason they do this is not because “Gaza is pretty small.”  Hicks next tells us that the fighters seek safety at the expense of the civilian population:

Hamas fighters are not able to expose themselves.  If they were to even step a foot on the street they would be spotted by an Israeli drone and immediately blown up.  We don’t see those fighters.  They are operating out of buildings and homes and at night.

Israel is fighting a terrorist neighbor. The world has a choice. They need to understand that this is a fight against terrorism and for democracy. They can choose to help Israel or they can ignore what is going on. The problem with ignoring what is going on is that the terrorists in Gaza are not a unique entity. They are linked (at least in philosophy) with Al Qaeda, Boko Haram, ISIS in Iraq and Syria, etc. We allow them to continue ruling Gaza at our own peril.