On Wednesday, The Epoch Times posted an article reporting that Ford Motor Company is recalling nearly 50,000 Mustang Mach-Es produced between May 27, 2020, and May 24, 2022, that do not have the proper repairs. Ford said it is working to develop a fix for the 48,924 cars that have experienced a loss of power, overheating, and startup problems. I understand that Ford Motor Company manufactures the Mustang, but they obviously do not understand the car. There is no way the Mustang should ever be an electric car.

“In the affected vehicles, it is possible that the high voltage battery main contactors may overheat, which can result in an open contactor or welding condition. Should the contactors weld closed while driving, a powertrain malfunction warning light will be illuminated on the next drive cycle, along with a no start condition,” the company said in a letter.

According to Ford, the issue stems from a battery main contactor that can overheat and may remain stuck open or become welded.

“Should the contactors weld closed while driving, a powertrain malfunction warning light will be illuminated on the next drive cycle, along with a no-start condition,” said Ford.

Ford spokesperson Said Deep told Nexstar the problem specifically relates to the vehicles’ “Direct Current” fast charging, adding that there is a chance the better can overheat, which “may lead to arcing and deformation of the electrical contact surfaces.” That may lead to the car losing power while driving, Deep said, significantly raising the risk of an accident.

Deep added that the repair will be fixed remotely through an “Over-The-Air (OTA) deployment” of a software update starting in July. Owners of the electric vehicle can take their Mach-Es to a Ford dealership for the software update.

They have ruined the Mustang. Software update indeed.

CNN is reporting today that auto industry icon Lee Iacocca has died. He was 94. He is credited as having played a major role in the creation of the Ford Mustang and the Chrysler minivan. As someone who has driven Ford Mustangs since the early 2000’s, I am grateful for his inventions.

Iacocca started working at Ford Motor Company in 1946, and was a major figure in the development of the Ford Mustang — the first vehicle of its kind. He was named president of Ford in 1970, but was fired by Henry Ford Jr. in 1978.

“I began my life as the son of immigrants, and I worked my way up to the presidency of the Ford Motor Company,” Iacocca wrote in his 1984 autobiography. “When I finally got there, I was on top of the world. But then fate said to me: ‘Wait. We’re not finished with you. Now you’re going to find out what it feels like to get kicked off Mt. Everest!'”

He was then hired by Chrysler Corp. in 1978 and became the company’s CEO in 1979. He is credited with saving the company from bankruptcy.

Iacocca urged Congress to authorize the Treasury Department to guarantee $1.5 billion in bank loans for Chrysler. Chrysler needed the bailout to survive back to back recessions in the early 1980s. Chrysler repaid the loans early. Treasury made money on the stock it received as part of bailout packages.

With the help of more fuel efficient and competitive products such as the so-called K-cars — which included the Dodge Aries and Plymouth Reliant — Chrysler became strong and profitable again.

Iacocca led Chrysler during an era in which Asian and European imports first started to take a significant share of the US automakers’ portion of the American car market.

During the 1980’s and 1990’s, my husband was commuting 50 miles to work each way. We owned a significant number of K-cars during that time. I hope Lee Iacocca is spending his time in heaven designing a new breed of sports cars for angels to take for a spin!

He was truly an American success story. 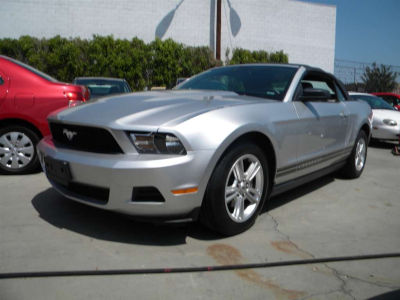 When I bought my latest Mustang convertible two years ago, I planned on keeping it forever. I added a number of accessories that I normally would not put on a car. Detroit has just convinced me that I made the right decision.

Yesterday the American Spectator posted an article about what Detroit is about to do to the Mustang. It’s not pretty.

More pertinent than its changing look will be its changing feel. Rumors abound, to the chagrin of drag racers, regarding the introduction of independent rear suspension. The five-liter engine supposedly morphs into a two-liter one. There is even talk of a hybrid Mustang.

This is the rendering of the new Mustang from their Facebook page. It took me a few years to get used to the look of the 2010 Mustang, but at least it looked like a traditional Mustang. This just doesn’t look right. And just for the record–my convertible is a six-cylinder. On the open road, it gets about 24 miles per gallon. If America would develop her own energy resources and stop cowtowing to OPEC, that wouldn’t be a problem.

A group called Strategic Vision posted a story last week reporting research they did regarding which members of which political parties purchase which cars.

These are the results:

I laughed when I read this–I drive a Ford Mustang Convertible. An article at Power Line, which reported the results of the study, concluded:

All of this adds up to one more illustration of the fact that it is a heck of a lot more fun to be a Republican than a Democrat.

For anyone who has been reading this blog for a while, I would like to update you on the rear window defogger on my Mustang Convertible. As you recall, the Mustang is a 2010 and had less than 14,000 miles on it when the defogger stopped working. The dealer told me that it was not covered by warranty and that I would have to spend $2000 out of pocket to replace the top. I was not happy with that answer and wrote to Ford. Initially Ford was not particularly helpful, so I wrote to the state Attorney General Consumer Affairs division and the Better Business Bureau. I did contact Ford again before I filled out the paperwork for the Better Business Bureau. The customer service person I got was very helpful, but the problem was still unsolved. After I contacted the Better Business Bureau, Ford called me to schedule an appointment with a “Ford Engineer” at the dealership. The rear window defogger is now working. The total cost to me was $7 (I put gas in the loaner car).

What have I learned from this? All future work on the car will be done at a different dealership–had I not pursued this, I would have spent $2000 that I don’t have and didn’t need to spend. The Better Business Bureau is there for a reason–don’t be afraid to contact them if you have a legitimate problem with a business. The Consumer Affairs division of the Attorney General’s office was also extremely helpful. As consumers, we do have certain rights, but we need to be willing to exercise them.