Issues & Insights posted an article today about the change in the number of Americans dependent on Government since President Trump took office.

The article includes a chart showing the change: 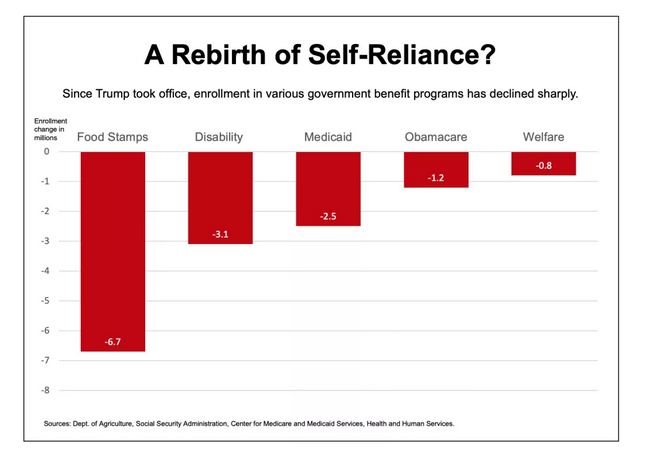 Here are some of the highlights listed in the article:

Disability. The number of workers on Social Security’s Disability Insurance program has sharply declined as well. It went from 88 million in January 2017 to 84.9 million as of May. That’s the lowest it’s been since August 2011.

…Medicaid. Enrollment in Medicaid also has dropped sharply since Trump took office — despite the fact that Virginia decided to expand its program under Obamacare, which added some 300,000 to its Medicaid rolls over those years.

As of this March, the total number of people on Medicaid and CHIP — the health insurance program for children — was down by 2.5 million.

Obamacare. The number enrolled in Obamacare has declined every year since Trump took office as well, and is now 1 million below where it was at the end of 2016.

Welfare. The number of those collecting welfare — either on the federal Temporary Assistance for Needy Families or what are called “separate state programs” — has dropped by more than 800,000 under Trump.

In a less biased news media world, the decline in government dependency would be front-page news.

Instead, when they’re acknowledged at all, these enrollment drops are treated as bad news by the Left, which treats any declining benefit programs as a problem that needs to be fixed — usually by expanding these programs. Thus, you have every Democratic candidate for president talking about trillions upon trillions of new benefit programs, which are designed to ensnare as many as possible in the net of government dependency.

They have it exactly backward. The goal should be to have zero people collecting government benefits — because they are gainfully employed and don’t need them. Anything else should be treated as a failure.

One of the reasons that it is so difficult to shrink government programs is that in addition to the people they serve, they provide employment for government workers. These workers understand that if assistance programs shrink drastically, then there will be fewer staff members needed to oversee the programs. It is definitely a reverse incentive to cut dependence on the government.

This article has two sources, an article in the U.K. Telegraph posted on March 30 and an article posted at Real Clear Politics yesterday.

As the British government struggles to keep pace with the expenses involved in providing a safety net for its citizens, some government programs are being phased out and combined with other programs. One of the programs under scrutiny is the sickness benefit program.

Iain Duncan Smith, the Work and Pensions Secretary. is attempting to combine dozens of different out-of-work benefits into a single payment with the aim of ensuring an individual is always better off working than collecting benefits. As part of that process, there is an assessment of the people on the sickness benefit program to determine whether or not they are fit to work. Some 878,300 people on that program decided to come off the program rather than submit to the assessment. We need to learn from this experience.

The article at Real Clear Politics looks at disability payments in America:

In 1960, when vastly more Americans were involved in physical labor of some kind, 0.65% of workforce participants between the ages of 18 and 64 were receiving Social Security disability insurance payments. Fifty years later, in a much healthier America that number has grown to 5.6%.

In 1960, 134 Americans were working for every officially recognized disabled worker. Five decades later that ratio fell to roughly 16 to 1.

I am sure that in most cases disability payments are warranted. In fact, I am sure that everyone who is disabled does not necessarily look disabled. I can think of one example in particular where a person received severe neck damage in a work-related car accident and on some days appears to be perfectly normal. On other days, that person can barely move. Unfortunately, there is no way of predicting which days are which. However, I do think there are people among us who would rather ride in the wagon than help pull it. The problem is that at this point we have too few people pulling the wagon and too many people sitting in the wagon.

Government workers have no incentive to cut disability payments–their jobs depend on administering these programs–if you cut the programs, you might have to cut the number of administrators. Government spending has become like the hamster on the exercise wheel–it keeps moving (and growing) but nothing is actually being accomplished.

If we are serious about ever balancing the federal (and states) budget, we need to take a serious look at who is receiving payments from that government and what the basis for those payments is. Until we are willing to help people enter the workforce instead of helping them enter generations of dependency on government, we will not solve our financial problems.