On Sunday, The Daily Caller reported the following:

On Monday, The Carolina Journal reported:

The N.C. Lt. Gov. Mark Robinson and Virginia Lt. Gov Winsome Sears, each the first black lieutenant governor of their respective state, have joined forces to pen a brief to the U.S. Supreme Court in support of Asian-American students suing Harvard and UNC-Chapel Hill. Carolina Journal was present at the Lieutenant Governor’s Mansion on May 19 at a press conference where the North Carolina Asian American Coalition (NCAAC) thanked Robinson for his support.

The students in the lawsuit accuse the institutions of discriminatory admissions practices, where they are held to a higher standard during consideration because of their race. The Robinson/Sears Amicus brief was filed May 9th.

“While it can be argued that these policies had a role in helping many Americans overcome the persistent effects of historical and past discriminations in higher education, those effects are becoming less impactful the further we travel from the dark days of state-sanctioned discrimination,” said Robinson at the event. “Instead, they now function to unfairly discriminate against and deny opportunity to other ethnic and racial groups. Discrimination on the basis of race or ethnicity is immoral in all of its forms, and we can do better. We must do better.”

The nonprofit group Students for Fair Admissions filed the original suit in 2014, but when it was ruled in November 2021 that Chapel Hill could continue to use affirmative action in their admissions, the case was appealed to the U.S. Supreme Court.

College admissions should be based on merit. If a student is admitted because of race or ethnicity and does not have the ability to do college work, the student is being set up to fail. No one gains by doing that. I hope the lawsuit is successful and we go back to rewarding people who work hard and stop rewarding people or punishing people for something they have no control over. 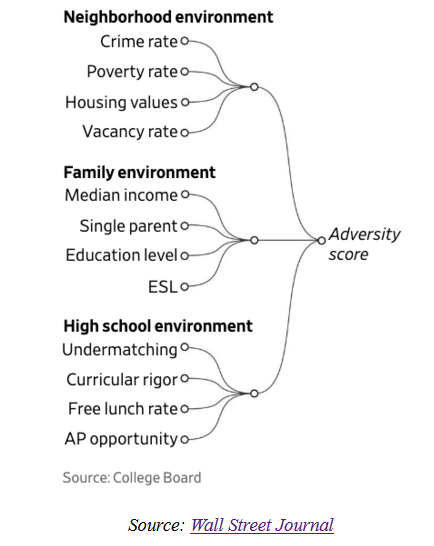 One of the most important things a parent can do is lead by example. Any time a parent does something that is not above board, it is a pretty good bet that their child will learn that it is okay to take shortcuts that may not be entirely honest. Unfortunately there seems to be a group of parents that despite their success has not yet figured this out.

The Associated Press is reporting today that federal authorities have charged a number of wealthy and famous people with falsifying information to make sure their children got into their schools of choice. I understand the desire of any parent to provide the best education possible for their children, but this scheme definitely stepped over the line.

Fifty people, including Hollywood stars Felicity Huffman and Lori Loughlin, were charged Tuesday in a scheme in which wealthy parents allegedly bribed college coaches and other insiders to get their children into some of the nation’s most elite schools.

Federal authorities called it the biggest college admissions scam ever prosecuted by the U.S. Justice Department, with the parents accused of paying an estimated $25 million in bribes.

“These parents are a catalog of wealth and privilege,” U.S. Attorney Andrew Lelling said in announcing the results of an investigation code-named Operation Varsity Blues.

…At least nine athletic coaches and 33 parents, many of them prominent in law, finance or business, were among those charged. Dozens, including Huffman, were arrested by midday.

The bribes allegedly were dispensed through an admissions consulting company in Newport Beach, California. Authorities said parents paid William Singer, the founder of the Edge College & Career Network, the bribe money to get their children into college.

Colleges moved quickly to discipline the coaches accused. Stanford fired Vandemoer, UCLA suspended its soccer coach, and Wake Forest did the same with its volleyball coach.

Several schools, including USC and Yale, said they were victims themselves of the scam. USC also said it is reviewing its admissions process to prevent further such abuses.

This is a sad commentary on where we are as a society. Obviously some parents want to take the guess work out of college admissions. What is the lesson they are teaching their children? I wonder exactly how much of these scheme the children involved were aware of. Certainly if a child is recruited for a sport he has no knowledge of, he might notice that something is amiss. I hope the penalties for the parents are severe. As much as I can sympathize with the stress of getting children into good colleges (all three of my daughters are college graduates, two have advanced degrees), what these parents did is inexcusable–first of all because it is patently dishonest and second of all because of the example it sets for the students.