The Daily Signal posted an article yesterday about the budget deal the House of Representatives put forth under Paul Ryan. The deal was essentially the deal that was negotiated by the previous Speaker of the House, John Boehner.

In October, in his effort to “clear the barn” for Ryan, then-Speaker John Boehner helped negotiate a two-year budget deal with President Barack Obama and Democrats. It raised the 2017 spending level roughly $30 billion above the total lawmakers set in 2011 to control spending.

Though the majority of Republicans did not vote for the Boehner-Obama budget deal, the new House leadership has indicated spending bills for fiscal year 2017 must abide by the higher spending level prescribed by the October agreement.

But a new report from the nonpartisan Congressional Budget Office projecting trillion-dollar deficit levels by 2022 appears to be persuading more than just the usual suspects to ignore the budget deal and insist on a lower spending level.

“I can tell you that Obamacare and the spending crisis are the reasons why I came up here and the reason I voted against the omnibus [spending bill] is because we got off Paul Ryan’s path to prosperity,” Rep. Blake Farenthold, R-Texas, said in an interview with The Daily Signal. “I will fight hard for a lower budget number, and I expect a great deal of my colleagues will do the same.”

Farenthold is referring to 2012 proposal authored by Ryan, R-Wis., when he was chairman of the House Budget Committee that reformed entitlement programs, cut taxes, and reduced spending.

While the conservative House Freedom Caucus is leading the charge to renege on the October budget deal and revert to the lower spending number set under the Budget Control Act of 2011, other GOP members also are concerned.

The Republican Study Committee, a larger group of conservative House members from which the Freedom Caucus sprang, will propose a budget that sticks to sequestration levels, its chairman says.

America cannot continue to spend money at its present rate. The deficit passed nineteen trillion dollars this week. I don’t even know how to write that number! Conservatives have been sending people to Washington since 2010 to cut spending. It is about time Washington heard their voices. If the people who are in Washington to represent us now do not represent us, we will have to send different people. 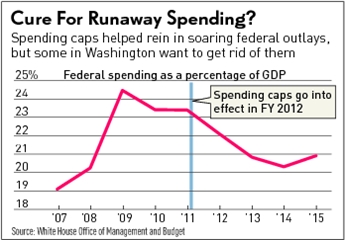 The chart shows the impact that the spending caps have had on the federal budget. The decline in spending is due to the Budget Control Act of 2011. The caps limit both domestic non-entitlement spending and national defense spending. However, it is becoming obvious that the President wants to be free of those restraints.

The White House plan would increase discretionary spending to $1.091 trillion from $1.017 trillion. This $74 billion increase would be split evenly between defense and domestic spending. The 7% hike in 2016 would dish out plums to unions, foreign aid groups, the education blob, government contractors, federal employees, the climate change lobby and other tax guzzlers.

Our Senate sources tell us that Minority Leader Harry Reid is threatening in private that if Republicans don’t give Democrats the raise they want, there will be fiscal paralysis in the Senate and another government shutdown Oct. 1 — which, of course, they will blame on the GOP.

Many Republicans are inclined to go along with the great fiscal escape plan. Some have legitimate concerns about more money needed for our military in times of growing national security threats. Already 60% of the cuts are in defense, even though military spending is less than 20% of the budget. But many GOP appropriators just want more domestic pork for their own districts.

I would like to remind every Republican Congressman now serving in Congress. You were elected to bring the spending under control. If you are not able to do that, we need to elect someone who can. End of story.

Obama rejected the convention of reaching across the aisle from the very start. In his first two years in office this White House never moved an inch in the GOP’s direction and passed his major bills on stimulus and Obamacare without a single Republican vote. Those bills were written with zero input from Republicans and when asked why, he haughtily lectured “we won the election.” Then he pouts the Republicans were no help.

Obamacare could have been a really good thing–there were three or four things that could have been included which would have make it less expensive and more efficient. Unfortunately, those things were not on President Obama’s radar (insurance able to be sold across state lines, tort reform, insurance that was portable from job to job, etc.). Any one of those things probably would have brought in some Republican votes.

Now Republicans are learning another harsh lesson about this White House: on those rare occasions when a deal is reached, Obama routinely breaches it. Consider the recent evidence:

• Death tax. One of the few bipartisan of recent years was to set the death tax at 40 percent. Now two years later, he says in his State of the Union he wants to raise taxes at death to closer to 60 percent. This would be nearly the highest tax penalty at death in the world.
• Capital gains taxes. Obama entered office with these rates at 15 percent. Then he said repeatedly he would “only raise them to the rate of the Clinton years.” That was a lie from the start because the rate under Clinton was 20 percent, but he raised it to 23.8 percent including the surcharge imposed under Obamacare. Now he says he wants to raise the rate to 28 percent, which he says was the Reagan-era rate. And if he gets that he will no doubt say he only wants to raise it to the Nixon rates–of more than 36 percent.
• Taxing college savings plans. Obama said he would only raise taxes on the rich. But then he proposed taxing the build up of money in college savings plans and that would club the middle class. The plan was so unpopular, the White House dropped it, but anyone with a Roth IRA or build up in a pension plan better be on guard. You’re next.
• Budget caps. The 2011 Budget Control Act set strict caps on discretionary spending. But Obama keeps proposing piercing those caps–which he himself proposed in the first place. His new budget for 2016 wants to crash through the spending ceilings to the tune of $74 billion this year.
• Paid family leave. When liberals sold the idea of parental leave back in the 1990s, they stressed over and over that this was only “unpaid” leave and so employers wouldn’t face undue costs. Now Obama and the Democrats want paid leave. Give an inch, they want a subsidized mile.
• Keystone XL Pipeline. Obama first said he was holding up Keystone because of environmental concerns in Nebraska with respect to water issues. But those issues have finally been resolved by the courts. Obama is now inventing new excuses for getting to “no.”
• Immigration. Obama’s executive actions–of questionable legality–legalizing millions of illegal immigrants seems to Republicans to be intentionally designed as a poison pill for immigration reform.

At some point, Congress has to stand up against executive overreach. I hope they do it soon.

…Which illustrates, for the umpteenth time, a point I have made over and over: budget/spending deals that purport to dictate spending many years into the future are a joke. No Congress can bind a future Congress. When a Congressman tells you that a purported ten-year deal cuts spending in the “out years,” grab your wallet and run. The out years never come.

As you can see, the budget does not decrease–it increases! Then why is the only actual cut the decrease in the cost of living adjustment (COLA) to military retirement?

The other point that emerges from these spending numbers is that discretionary spending is relentlessly being squeezed out by entitlements. The real constraint on the growth of both defense and non-defense discretionary spending is the explosion in entitlements–Medicare, Medicaid, Social Security and now Obamacare. With the Democrats vowing to fight to the last ditch to resist any sort of entitlement reform, and with federal debt having risen to more than $17 trillion–another budget-crusher as soon as interest rates rise again–there is simply no money for the social spending boondoggles that the Democrats would dearly love to finance. I suppose we should count our blessings.

***This paragraph is taken from a Senate Budget Committee report.

Yesterday John Hinderaker at Power LIne posted an article entitled, “If A Tree Falls In the Senate Budget Committee Hearing Room…” It was the most accurate news article I have seen in a long time.

…Obama’s acting OMB Director, Jeffrey Zients, appeared before the Senate and House Budget Committees to defend the budget and encountered rough sledding. Among other things, Senator Jeff Sessions asked Zients whether the president’s budget increases spending compared with current law, and Zients was unable or unwilling to answer the question. You know that Tim Geithner followed Zients to the Senate Budget Committee hearing room, and he, too, was unable to say whether Obama’s budget increases federal spending. (It does, both in comparison with current law, as represented by the Budget Control Act, and in absolute terms, by 46% from FY FY 2012 to FY 2021.) You know that the administration’s claim that its budget contains $2.50 in spending cuts for every dollar in tax increases is ridiculous. You know that, despite his confusion on other points, Geithner testified for the second year in a row that President Obama’s budget is “unsustainable.”

This needs to be shouted from the rooftops! We are headed in the direction of bankruptcy and riots in the streets. So what are we talking about–Rich Santorum and his views on birth control.

I searched three leading liberal newspapers, the New York Times, the Washington Post and the Los Angeles Times: neither the New York Times nor the L.A. Times had run a single story about the Congressional hearings on the FY 2013 budget. The Post had done only slightly better; it failed to report on Zeintz’s testimony and, while it did run a short item on Geithner’s Budget Committee appearance, it failed to note either his admission that Obama’s budget is unsustainable or his inability to say whether the budget increases spending.

Americans who rely on traditional news sources have no idea what is going on. No wonder the President’s approval ratings are still good!

The lack of information getting to the voting public is a danger to the future of our country. It’s a shame that the major media does not realize that when it all collapses, they will be included in the collapse.