One America News is reporting today that the Senate has passed a bill sanctioning Chinese officials over the country’s actions against Hong Kong. The bipartisan Hong Kong Autonomy Act passed with unanimous consent Thursday.

This is good news. China needs to pay a price for what it has done to Hong Kong. Otherwise Taiwan is next. Taiwan is probably next anyway, but at least we can try to slow things down a little.

The bill would place sanctions on businesses, individuals and police that interfere with Hong Kong’s freedoms. This came after China announced a national security law that is expected pass on June 30, which is threatening Hong Kong’s autonomy.

“The Senate needs to act now, Mr. President, to send a clear signal now that we will stand up to this aggression,” he stated. “…to rally free peoples now in defense of the rights and liberties of Hong Kong.”

Hitting China in the pocketbook is probably the only was to deal with them successfully.

Yesterday The Conservative Treehouse posted an article that brings up a very interesting question. 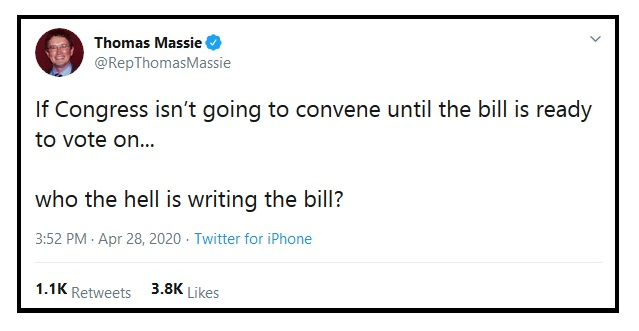 That is a really good question. The article then provides an insightful answer. The article is very complex, so I suggest you follow the link to read the entire article. However, I will post some excerpts here.

Most people think when they vote for a federal politician -a House or Senate representative- they are voting for a person who will go to Washington DC and write or enact legislation. This is the old-fashioned “schoolhouse rock” perspective based on decades past. There is not a single person in congress writing legislation or laws.

In modern politics not a single member of the House of Representatives or Senator writes a law, or puts pen to paper to write out a legislative construct. This simply doesn’t happen.

Over the past several decades a system of constructing legislation has taken over Washington DC that more resembles a business operation than a legislative body. Here’s how it works right now. 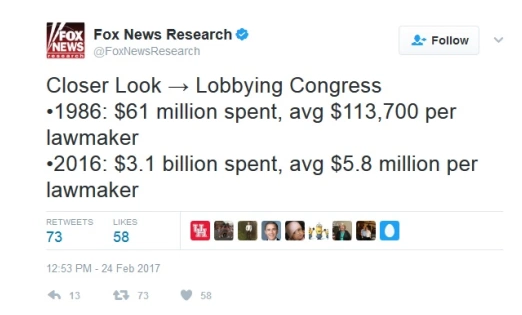 The article explains that elected representatives are no longer writing bills:

Outside groups, often called “special interest groups”, are entities that represent their interests in legislative constructs. These groups are often representing foreign governments, Wall Street multinational corporations, banks, financial groups or businesses; or smaller groups of people with a similar connection who come together and form a larger group under an umbrella of interest specific to their affiliation.

The for-profit groups (mostly business) have a purpose in Washington DC to shape policy, legislation and laws favorable to their interests. They have fully staffed offices just like any business would – only their ‘business‘ is getting legislation for their unique interests.

These groups are filled with highly-paid lawyers who represent the interests of the entity and actually write laws and legislation briefs.

In the modern era this is actually the origination of the laws that we eventually see passed by congress. Within the walls of these buildings within Washington DC is where the ‘sausage’ is actually made.

Again, no elected official is usually part of this law origination process.

The article explains how the election of President Trump temporarily flummoxed the system:

President Donald Trump winning the election threw a monkey wrench into the entire DC system…. In early 2017 the modern legislative machine was frozen in place.

The “America First” policies represented by candidate Donald Trump were not within the legislative constructs coming from the K-Street authors of the legislation. There were no MAGA lobbyists waiting on Trump ideology to advance legislation based on America First objectives.

As a result of an empty feeder system, in early 2017 congress had no bills to advance because all of the myriad of bills and briefs written were not in line with President Trump policy. There was simply no entity within DC writing legislation that was in-line with President Trump’s America-First’ economic and foreign policy agenda.

Exactly the opposite was true. All of the DC legislative briefs and constructs were/are antithetical to Trump policy. There were hundreds of file boxes filled with thousands of legislative constructs that became worthless when Donald Trump won the election.

Those legislative constructs (briefs) representing tens of millions of dollars worth of time and influence were just sitting there piled up in boxes under desks and in closets amid K-Street and the congressional offices. Legislation needed to be in-line with an entire new political perspective, and there was no-one, no special interest or lobbying group, currently occupying DC office space with any interest in synergy with Trump policy.

Think about the larger ramifications within that truism. That is also why there was/is so much opposition.

No legislation provided by outside interests means no work for lobbyists who sell it. No work means no money. No money means no expense accounts. No expenses means politicians paying for their own indulgences etc.

This is a system that needs to be permanently broken.

CNS News posted a story yesterday about the immigration bill hearing which is scheduled for Friday. The bill was actually introduced Wednesday morning. The bill is 844 pages long. Does anyone actually believe that this bill will be read before the hearing occurs and before it is voted on? Does anyone believe that the public will have a chance to take a really good at this bill?

So, will anyone actually read the entire immigration bill prior to the hearing – or even before voting on it?

History says “no,” if you look at some of the previous long, important bills congressmen have admitted they didn’t read before voting on them: