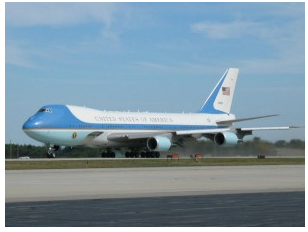 The Gateway Pundit is reporting today that President Trump has reached a new deal with Boeing Corporation on the construction of two new Air Force One airplanes. The article states that the president reportedly saved the country $1.4 billion on the deal. Admittedly, $1.4 billion is only a small dent in national expenditures, but it is still a move in the right direction.

Breitbart.com posted an article today about an aspect of the gun-control debate that seems to have been missed in the news coverage.

It seems that the families who had lost loved ones in the shooting in Newtown, Connecticut, were not initially informed as to the reason for their Air Force One trip to Washington.

The article quotes a Maureen Dowd article in the New York Times:

Murphy said it was hard, flying down on Air Force One with the trepidatious Sandy Hook families, to explain that they would be lobbying to get a vote on a vote. “They thought they were coming down here to argue for a ban on high-capacity magazines and universal background checks, and we told them that they were coming to argue to avert a filibuster and allow us to debate,” he said. “And that was really heartbreaking and deflating for some of them. But they rose to the occasion, and it was wonderful to see them at the end of the trip feeling like they had made a difference.”

So let me get this straight. The families thought they were going to Washington to argue for specific changes to gun laws. Once aboard Air Force One they were told something entirely different. Then the article says it’s all okay because they left feeling good.  I realize that I don’t always understand what goes on politically, but I think this is a new low in American politics and in media exploitation of people who have just suffered a tragedy.

If the gun control people had to lie to get these people to go to Washington, what else are they lying about?