Hot Air posted an article today about “Meth-gators.” Yes, you read that right.

Loretto Police Department in Tennessee posted an ominous warning on Facebook. “Don’t flush your drugs” is their message. If you thought that “Deeznutz” the attack squirrel was a wild story, how about meth-gators?

You may remember Deeznutz. Alabama police say they were warned about a man feeding his pet squirrel methamphetamines to make it an attack squirrel. The story goes that the squirrel was not tested for drugs when the man was arrested and it was released. If you think a meth-fueled rodent sounds bad, there is a more troubling development. Maybe.

There is a serious side to this article.

The Loretto Police Department used its Facebook page to deliver a public service announcement after the drug bust on the dangers of contaminating the local water supply with drugs. No one wants methed-up animals.

“This Folks…please don’t flush your drugs m’kay (sic). When you send something down the sewer pipe it ends up in our retention ponds for processing before it is sent down stream. Now our sewer guys take great pride in releasing water that is cleaner than what is in the creek, but they are not really prepared for meth.”

“Ducks, Geese, and other fowl frequent our treatment ponds and we shudder to think what one all hyped up on meth would do. Furthermore, if it made it far enough we could create meth-gators in Shoal Creek and the Tennessee River down in North Alabama. They’ve had enough methed up animals the past few weeks without our help. So, if you need to dispose of your drugs just give us a call and we will make sure they are disposed of in the proper way.”

Seriously, most police departments have a disposal site for unused drugs. They don’t belong in our water supply.

The media double standard reflects the double standard of some of the more vocal protest groups. Forbes posted an article on Tuesday that beautifully reflects this double standard. The article deals with the environmental threat posed by the protesters at the site of the future Dakota Access Pipeline. The threat is not a perceived future threat, such as is claimed by the protesters if the pipeline were to rupture, but an actual threat that must be dealt with before the spring thaw. I strongly suggest that you follow the above link and read the entire article–it is done almost as a parody of The Twilight Zone.

There is of course no national media uproar condemning the protesters who have created the current mess, or the conflict groups that helped to organize them, raised millions as a result of the conflict, but are contributing nothing to the cleanup.  Nor is there any negative media mention of the dozens of celebrities who have visited the site to get a little free publicity over the last several months, or drawn attention to themselves by supporting the cause on social media, but who also are doing nothing to help with the clean up effort.

The Washington Post managed to find space to publish a story on the situation on Monday, but its story angle was completely sympathetic to the protesters – whose efforts have now cost Morton County taxpayers almost $33 million at last count, with millions more to come – and to the Standing Rock Sioux Tribe, whose national call to action last summer was the catalyst for the influx of the outside protesters.  Indeed, a January tally of the almost 600 protesters who have been arrested during this protest action demonstrated that more than 94% of them hail from out of state, and more than 180 had criminal records.

The Washington Post’s story makes no mention of any of that, no mention of the dozens of abandoned cars or of the estimated 200-plus large truckloads of garbage left behind by the protesters that remain at the site.  No mention of all the arrests of out-of-staters, or of the massive cost to Morton County.  Indeed, the only real mention the Post makes of trash in the camp reads as follows:  “In the slurry running through camp are the remains of a mostly abandoned mini-city: an unopened packet of Top Ramen, a broken shovel, a mud-soaked glove, a pacifier.”

The article explains the threat to the water supply of the area:

The state of North Dakota also manages a website – NDRESPONSE – that provides excellent documentation of the real status of the protest site.  Their reporting has very clearly demonstrated that there is far more “in the slurry running through the camp” than the Post’s report implies, and with another week of spring-like weather to come, concerns about the potential for that slurry turning into a stream carrying pollutants into the nearby lake are very real indeed.  “We are very concerned about the potential for significant flooding and runoff into the lake later this week,” Keller said.

Given the way in which this situation has developed over time, it is fair to provide an admittedly partial list of well-heeled celebrities who have either visited the protest site since last August or expressed their support via social media for the #NoDAPL protest, and who are now making no effort whatsoever to assist in cleaning up the looming ecological disaster their “water protectors” have left behind:

The pipeline poses a minimal potential threat. The protesters have created an environmental disaster. If the state of North Dakota cannot clean up the mess before the spring thaw, the local residents will not have safe water to drink. The protesters have done immediate damage. The pipeline is engineered to be safer than alternative methods of transporting oil.

This is a picture of some of the mess left behind: 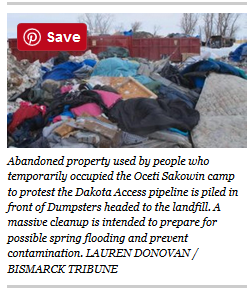 The double standard here is amazing.

I will admit to being more than slightly paranoid. I live near Boston, and what happened at the Boston Marathon was a serious wake-up call. With this is mind, I am not happy about the way a recent event was handled.

State Police say there were no warrants or advisories on any of the individuals and “there was no evidence that the seven were committing any crime beyond the trespassing.”

All seven were allowed to leave and will be summonsed to court for trespassing. The FBI is investigating and routine checks of public water supplies have been increased following the incident.

I hope that this is not the whole story. Pakistan is a country heavily infiltrated by Al Qaeda–it is known for fomenting terrorism. A Pakistani scientist is probably the person most responsible for Iran’s progress toward a nuclear bomb. To allow these people to leave and assume that they will show up in court later seems very naive. I would be willing to let them leave if we tapped their phones and cell phones and put ankle bracelets on them. Otherwise, they may somehow disappear between now and the time of their court appearance.