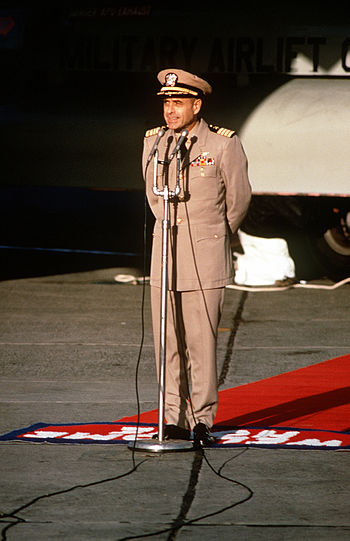 Fox News is reporting today that Jeremiah Denton has died. Jeremiah Denton was held as a prisoner of war in North Vietnam for 7 1/2 years. He alerted the U.S. military to conditions there when he blinked the word “torture” in Morse code during a television interview.

I remember watching the ceremony on television when the prisoners of war were welcomed home. My husband was a Vietnam-era veteran, and I was friends with someone whose husband had been missing in action for several years. It was wonderful to see Captain Denton and the other men who survived the Hanoi Hilton come home. Captain Denton’s leadership helped many of the other prisoners cope with the miserable conditions they were subjected to. He was a true hero.

Last week Stars and Stripes reported that the USS Forrestal, the Navy’s first supercarrier, will be towed from the Navy’s inactive ship facility in Philadelphia to All Star Metals’ facility in Texas, where it will be broken down into scrap metal.

The Forrestal  played a major role in the war in Vietnam. In 1967 there was a tragic fire on the ship which killed 134 men and injured more than 300 men.

The Navy’s first “supercarrier,” the Forrestal was in the Gulf of Tonkin the morning of July 29, 1967, for the Vietnam War effort when stray voltage triggered a rocket to launch from an F-4 Phantom on the flight deck.

The rocket struck an armed A-4 Skyhawk — piloted by a young Lt. Cmdr. John S. McCain III — rupturing the fuel tanks and sparking a chain reaction of fires and explosions on the deck, which was parked full of planes.

The crew fought the flight deck fire for an hour, but other fires blazed into the next day.

A piece of history is now become scrap metal.

In his book Barack Obama’s Rules for Revolution, The Alinsky Model, David Horowitz relates an incident that tells us all we need to know about how underhanded the game of politics can be.

College student activists in the 1960’s and 1970’s sought out Alinksy for advice about tactics and strategy. On one such occasion in the spring of 1972 at Tulane University’s annual week-long series of events featuring leading public figures, students asked Alinsky to help plan a protest of a scheduled speech by George Bush, then U.S. representative to the United Nations, a speech likely to be a defense of the Nixon Administration‘s Vietnam War policies [Note: the Nixon Administration was then negotiating with the North Vietnamese Communists to arrive at a peace agreement- DH] The students told Alinsky that they were thinking about picketing or disrupting Bush’s address. That’s the wrong approach, he rejoined – not very creative and besides, causing a disruption might get them thrown out of school. [Not very likely-DH] He told them, instead, to go hear the speech dressed up as members of the Ku Klux Klan, and whenever Bush said something in defense of the Vietnam War, they should cheer and wave placards, reading, ‘The K.K.K. supports Bush.’ And that is what the students did with very successful, attention-getting results. (This story is taken from a Saul Alinksy book, Let Them Call Me Rebel)

So why am I telling this story? The tactics really have not changed. A website called redflagnews is reporting that Renee Vaughan, who was holding a sign at a Trayvon Martin rally, was not who she appeared to be. Ms. Vaughan held a sign that stated, “We’re racist & proud,” and stood with the group supporting George Zimmerman.

Austin resident Renee Vaughan echoed the sign’s ugly sentiments by yelling, “We’re racist. We’re proud. We’re better because we’re white,” at the Martin group as they passed, according to the Chronicle.

…Brandon Darby interviewed Renee Vaughan at the rally. She told him her sign means that “there are people here who are racist and apparently think that’s OK. I’m not one of them. I’m being sarcastic.”

It looks as if Saul Alinsky’s tactics are alive and well among those who want to divide this nation along racial lines.

Yesterday the Navy Times posted a number of pictures taken at Arlington National Cemetery taken during the burial of Michael Judd. Michael was a Navy Corpsman who was killed in Vietnam.

The 21-year-old Cleveland man was aboard a helicopter that crashed June 30, 1967. He had gone to Vietnam in 1966 and was killed less than two months before he was scheduled to return home.

Judd was with a Marine reconnaissance team when the aircraft was shot down.

Please follow the link above to the article to see the pictures. Welcome Home, Michael.

I belong to the generation that fought the war in Vietnam. My high school graduating class went to college or Vietnam. If you weren’t taking enough college credits, you went to Vietnam. You didn’t have a choice–there was a draft. Our generation lost some good people in Vietnam. Some of them came home physically, but not mentally or emotionally. Whether or not you believed the war was the right thing to do, it left a huge scar on the sixties generation. I was deeply offended when John Kerry was named Secretary of State. The lies he told to advance his political career dishonored all Vietnam veterans and made it harder for those veterans to get jobs. He changed the perception of the returning veteran from good citizen fighting for his country to out-of-control criminal. Now CBS television is picking up where Secretary of State Kerry left off.

On Thursday, Fox News posted an article about an episode of “The Amazing Race.”

The popular CBS reality show “The Amazing Race” is under fire for featuring an episode set in Hanoi, Vietnam, where contestants go to a B-52 Memorial, which is the wreckage of an American bomber plane shot down during the Vietnam War, to find the next clue in their televised round-the-world journey.

In the episode, the twisted metal of the downed plane is treated as any other prop, with a bright ‘Amazing Race’ ‘Double-U-Turn’ signed planted in front of it, signifying to contestants the next phase of their scavenger hunt.

Would they have done the same thing with the marine barracks in Lebanon? Unfortunately, the insult does not stop there–the contestants also learn a song young children sing that praises communism.

The article reports one viewer’s online comment about the show:

“So, did anyone but me find the ‘Amazing Race’ going to Hanoi and extolling the greatness of Hanoi offensive?” a viewer remarked online. “Especially the part where the contestants had a ‘clue’ box at a Hanoi monument of a downed B-52? And none of them even slowed down to look at it or reflect on what it meant?”

I really have no idea what the creators of the show were thinking. Many of the Vietnam veterans are still with us, and many have serious health issues related to the time they spent there. A little sensitivity might be a really good thing.

The Washington Free Beacon reported today that in the fourth quarter of 2012, the U. S. Gross Domestic Product fell .1 percent. This is the first decline in three years.

“The number isn’t as bad as it looks,” said Paul Edelstein, director of financial economics at IHS Global Insight in Lexington, Massachusetts, whose team projected a 0.3 percent gain, the lowest in the Bloomberg survey. “This really was a story about a payback in national defense spending. Consumer spending growth picked up, fixed investment was fairly strong.” […]

Government outlays dropped at a 6.6 percent annual pace from October through December, subtracting 1.3 percentage points from GDP. The decrease was led by a 22.2 percent fall in defense that was the biggest since 1972, following the Vietnam War.

Meanwhile, everyone in Washington is blaming everyone else.

Carney said economic observers were “rightly appalled” by the threat of sequestration or default to drive a debt deal, and charged that Republicans were harming the economy to the benefit of the wealthiest Americans.

“It can’t be we’ll let sequester kick in because we insist tax loopholes remain in place for corporate jet-owners,” Carney said.

Brendan Buck, a spokesman for Speaker John Boehner (R-Ohio), pointed the finger of blame for the still-looming sequester back at the White House.

“These arbitrary, automatic cuts were a creation and demand of the White House in 2011,” said Buck. “Twice the House has passed legislation to replace them with common sense cuts and reforms. If there was any uncertainty late last year about the sequester, it was because the Democratic-controlled Senate, per usual, never lifted a finger to pass a plan to replace it.”

We are now more than four years into bad fiscal policy. At some point that fact will be recognized (even in Washington). The answer, unfortunately, will not come until the 2014 elections. At that point Americans will have to decide whether to continue on our present path or try something different. I strongly suggest we try something different–controlling spending and passing a budget would be a great start.