The article reports the results of the audit:

The cover page for State Auditor Elaine Howle’s 167-page audit report states bluntly that the UC president’s office  “Failed to Disclose Tens of Millions in Surplus Funds, and Its Budget Practices Are Misleading.”

The audit found that the UC spent $32.5 billion on expenses during the 2015-16 school year to fund 10 campuses, five medical centers, and its Office of the President headquarters. Although the UC states that its “fundamental missions are teaching, research and public service,” the UC only spent “$6.7 billion (21 percent) on teaching, “$4.6 billion (14 percent) on research” and “$630 million (2 percent) on public service.” The other $20.6 billion (63 percent) was spent on non-fundamental activities.

The audit highlighted criticism in January from students and lawmakers after the UC regents approved President Napolitano’s 2.7 percent tuition increase for the 2017-18 year, given that UC tuition nearly doubled from $6,141 in 2006–07 to the current $12,192 this school year.

In addition, State Auditor Howle’s audit found the “Office of the President has amassed substantial reserve funds, used misleading budgeting practices, provided its employees with generous salaries and atypical benefits, and failed to satisfactorily justify its spending on systemwide initiatives.”

The article further explains that the Office of the President interfered in the audit process. The article includes a list of financial issues discovered in the audit. The problems were outlined in a cover letter sent to California Governor Jerry Brown with the audit. If you follow the link above to the article, the list is posted there.

The Democrats are on the record as stating that they want free college for everyone. Meanwhile, the actions of Ms. Napolitano cause me to question the sincerity of that desire. There is also Senator Elizabeth Warren who make $300,000 to $400,000 per year for teaching two or three college classes a week. Didn’t these people study economics? Where do they think the money to pay the teachers and keep the buildings in a reasonable state of repair is going to come from if college is free?

The rapid increase in tuition costs is largely due to the government involvement in student loans. The colleges have no incentive to cut costs–students can get government loans to pay outlandish tuition costs. The government has no incentive to look carefully at the students taking out the loans–it’s taxpayer money. And meanwhile the current student loan debt is larger than the current credit card debt in America. It is a bubble waiting to burst, and the taxpayers will be left holding the bag. The student loan program is another federal entity that needs to be put back into the hands of private banks who understand how and when to lend money. Meanwhile, colleges need to learn to control their spending. Tuition increases should be about level with the rate of inflation.

The following chart shows what has happened to college costs from 1985 to 2011. The chart is from a website called inflation data: 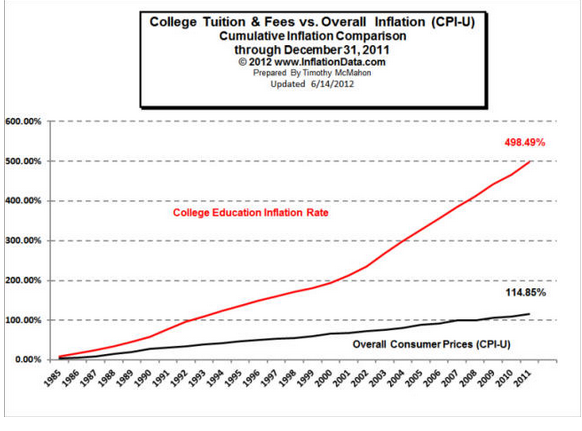 The government took over the student loan program in 2010.

Holly Robichaud posted a column at the Boston Herald today about a statement by Massachusetts Treasurer Steve Grossman concerning the cost of illegal aliens to the state.

At this eight-town South Shore Democratic Caucus, like Gov. Deval Patrick, Grossman came out in favor of in-state tuition breaks for illegal immigrants, putting him at odds with middle-class voters and union members, but firmly on the side of moonbat liberals who don’t believe in enforcing our laws. Is it no wonder why Democratic State Party Chairman John Walsh doesn’t like primaries?

…Grossman went on to deny that it costs money to give these breaks. To quote him: “(Opponents) say it will cost us money. Once again, this is absolutely wrong.”

The article points out that in-state-tuition breaks are subsidized by the taxpayers of Massachusetts and do actually cost money.

Vaughn (Jessica M. Vaughan, director of policy studies for the Center for Immigration Studies) estimates that taxpayers are spending anywhere from $3,000 to $15,000 per illegal immigrant student, depending on the school. Using her estimates, if just 100 illegals get the break, it will costs us $300,000 to $1.5 million for one year. According to the Center for Immigration Studies, more than 225,000 illegals live in the commonwealth. So it will be more than 100 students.

My questions here is simple, “Why should an American citizen from a state other than Massachusetts pay more to go to college in Massachusetts than someone who is here illegally?”

Yesterday Smartmoney.com posted an article explaining how government student loans and grants have caused an increase in college tuition. The article points out that federal aid for college students has increased 164% over the past decade, but many potential students still find the cost of a college education unaffordable

After adjusting for differences among schools, the authors find that Title IV-eligible schools charge tuition that is 75% higher than the others. That’s roughly equal to the amount of the aid received by students at these schools.

Studies like these suggest that if one goal of government is to make college affordable, aid should become more thoughtful instead of merely more plentiful. And the total cost of federal spending on college isn’t fully known. That’s because spending on loans dwarfs that on grants. Student loans recently eclipsed credit card debt.

The article reminds us that with high unemployment and the unavailability of the high paying jobs that graduates need to pay off their college loans, the taxpayers could wind up paying the bill for a lot of college tuition loans. Yesterday The Daily posted an article about the rising cost of a college education. The numbers are startling. The class of 2034 faces a college bill for a top college of $422,320 in today’s dollars.

The Daily analyzed historical, inflation-adjusted price data from the College Board to see what a bachelor’s degree might cost the class of 2034 in 2011 dollars. The result: Total tuition and fees would top $232,000 for an average-priced four-year private college and nearly $81,000 at an average-priced public university — up 111 percent and 167 percent, respectively, from the average class of 2012 tuition.

The solution to this problem is NOT government regulation or intervention. This is a case where the free market will actually correct itself (if allowed to). The government has intervened with financial aid programs and loan programs that have allowed tuition and costs to be raised, but as the Occupy Wall Street people complained, it has also caused many students to graduate from college with crippling debt. The free market correction, if it is allowed to occur, will be fewer students going to the more expensive colleges and those colleges being forced to cut their budgets and their tuition. Unfortunately, the student loan and grant programs, as much as they allowed lower-income students to attend college (a good thing), also resulted in inflated tuition costs. It’s time to let the free market bring balance back to the cost of a college education.